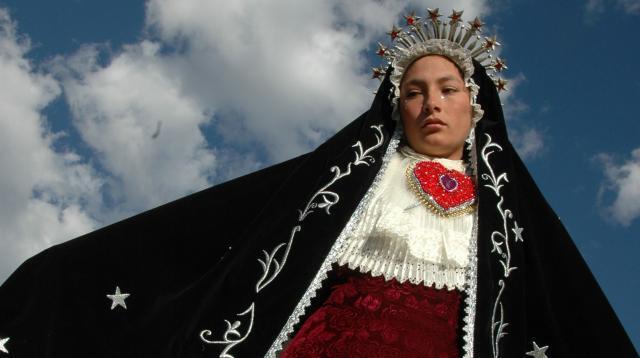 Since then, the Festival has gone on to feature a long string of vital features helmed by women, from Mina Shum’s Double Happiness (Canada) to Claudia Llosa’s Madeinusa (Peru) to Jane Campion’s Sweetie (New Zealand) to Iria Gómez Concheiro’s The Cinema Hold-Up (Mexico). Today, as we celebrate International Women’s Day, we’ve created a watchlist of must-see films from around the globe that have played the Sundance Film Festival over the years, highlighting the women on both sides of the camera that brought them to life.

Keep reading to learn more; then add these titles to your streaming queue before Women’s History Month is over. We also encourage you to learn more about the Sundance Institute’s Women at Sundance Program, as well as ReFrame, a partnership with WIF that uses a peer-to-peer approach to forge gender parity at every level in film, TV, and media.

One of just two U.S. representatives on our International Women’s Day watchlist is another Festival film shot by an all-women crew. Written, directed, and produced by Zoe Lister Jones (who co-helmed How It Ends from this year’s Festival), the feature “offers an honest, intelligent, and hilarious perspective on modern relationships,” according to our director of programming, Kim Yutani. Lister-Jones rounded out her crew with editor Libby Cuenin, cinematographer Hillary Spera, and co-producer Natalia Anderson.

Canadian drama Before Tomorrow — aka Le jour avant le lendemain — by filmmakers Marie-Hélène Cousineau and Madeline Ivalu, was the first film to be made by Arnait Video Productions, an Inuit women’s film collective. Set around 1840 in the Arctic Circle, the film “combines traditional Inuit storytelling traditions with European cinema techniques to portray a story of a grandmother and a grandson who fend for themselves after tragedy strikes their clan,” wrote Bird Runningwater, director of the Sundance Institute’s Indigenous Program. [WATCH]

Mexican writer-director-producer Iria Gómez Concheiro’s Asalto al Cine (aka The Cinema Hold-up) — about a group of teens who decide to hold up a local movie theater — played the 2011 Sundance Film Festival as part of the World Cinema Dramatic Competition. Co-edited by Luciana Jauffred, the project “is a vibrant, authentic, and wonderfully observed portrait of the tempo and texture of today’s Mexican youth culture,” wrote programmer Shari Frilot in the Festival catalog. [WATCH]

Our second and final U.S. entrant on our watchlist comes from Nigerian American filmmaker Chinonye Chukwu. “Clemency is an absorbing and penetrating character study that pulls into deep focus the various ways in which people facing impossible ethical circumstances strive to achieve some state of grace,” say our programmers of the film, which was edited by Phyllis Housen. “[Chukwu] crafts a dense, emotional film through masterful restraint and precision, drawing forth radiant performances that illuminate the internal grapplings of people searching for redemption and self-recognition.” [WATCH]

Serbian writer-director-producer Mina Djukic’s drama “perfectly captures the rush of youthful rebellion and the euphoria of finding a kindred spirit, but uses its vivid portrait of that bliss to facilitate a clever and creative exploration of the stumbling blocks one encounters while growing up,” wrote programmer Heidi Zwicker when the film premiered at the 2014 Sundance Film Festival in the World Dramatic Competition. [WATCH]

In our 1985 Festival catalog, British writer-director Sally Potter described her film as “a musical describing a female quest [posing questions] about the connections between gold, money and woman; about the illusion of female powerlessness, about the actual search for gold and the inner search for gold; about imagery in the unconscious and its relationship to the power of cinema; looking at childhood and memory and seeing the history of cinema itself as our collective memory of how we see ourselves and how we as women are seen.” Potter returned to the Festival with her filmic adaptation of Virginia Woolf’s novel Orlando in 1993. [WATCH]

“Alicia Scherson’s striking third feature uses the streets of Rome to create a world both richly beautiful and unapologetically provocative,” wrote our programming team when the Chilean writer-director’s Il Futuro played the 2013 Festival. Edited by Soledad Salfate and Ana Álvarez Ossorio, and co-produced by Claudia Steffen, the film tells the story of a pair of recently orphaned siblings whose lives are changed when they meet Maciste, a retired Mr. Universe. [WATCH]

Australian director Gillian Armstrong was already a familiar face at the Sundance Film Festival by 1993, the year she and screenwriter Helen Garner brought The Last Days of Chez Nous to Park City — she had previously attended the Festival with her 1985 feature Mrs. Soffel and her 1986 experimental short film Decade of Women. “In the past Armstrong has demonstrated the emotive power she can bring to the screen, and this complex, yet pointed, family melodrama is no exception,” wrote our programmers in the 1993 catalog. “The madcap and often-tumultuous clash of personalities and needs generates an unending stream of moments which alternately charm and chill the viewer.” [WATCH]

In 2020, London-born writer-director-producer Zeina Durra returned to the Sundance Film Festival with Luxor, her follow-up to 2010’s The Imperialists Are Still Alive! Lensed by Zelmira Gainza and edited by Andrea Chignoli, the film immerses the viewer in the majestic Egyptian city as seen through the eyes of Hana (Andrea Riseborogh), who has returned to the city where she spent much of her 20s for a nostalgic solo trip. “The city serves not only as the film’s setting but also as a point of remembrance and as an ode to the past, as Luxor honors the belief in energies, timing, and the magic of second chances,” wrote our programmers. [WATCH]

“Modern-day urban values mix and clash with small-town life in Madeinusa, Claudia Llosa‘s remarkable debut feature about a city stranger’s encounter with an innocent beauty living in an isolated village in Peru’s Cordillera Blanca mountain range, a region characterized by religious fervor,” wrote programmer Shari Frilot in the 2006 Festival catalog. Since then, Llosa has directed projects like 2014’s Aloft, 2009’s The Milk of Sorrow, and 2012’s Loxoro. [WATCH]

Russian-Armenian writer-director Anna Melikyan and co-writer Natalya Nazarova made a splash at the 2008 Festival with Mermaid, a comedy-drama starring Mariya Shalayeva. “Fusing myth, dream, and warped reality with abundant invention, the film is an ingenious vision of dark enchantment,” wrote programmer Trevor Groth. “Mermaid marks the emergence of a marvelously gifted filmmaker and represents commercial art-house cinema at its very best.” [WATCH]

“Sally El Hosaini proves herself a bold and brilliant new directorial talent with this gorgeous and masterful debut,” wrote programmer Shari Frilot of the Welsh-Egyptian writer-director-producer’s debut feature, which premiered at the 2012 Festival. “Rich in beauty, humility, and authenticity, My Brother the Devil is an urban tale that burns with vision and passion — a gem bound to find a place of distinction.” El Hosaini brought the project through the Sundance Institute’s 2009 Screenwriters and Directors Labs, and she was also a 2017 FilmTwo Initiative Fellow. [WATCH]

At the 2017 Festival, Singaporean writer-director Kirsten Tan won a World Cinema Dramatic Special Jury Award for Best Screenplay for her debut feature, which was lensed by cinematographer Chananun Chotrungroj. “Pop Aye is a humane ode to the power of simple acts of kindness in a world of lost innocence and missed opportunities, punctuated by well-timed bursts of deadpan absurdity,” wrote Festival programmer Heidi Zwicker. “[Tan] deftly weaves the poignance and humor of Popeye and Thana’s journey with a series of indelibly beautiful cinematic images of the film’s gigantic star in this lyrical road-trip dramedy.” [WATCH]

“A riveting and provocative film, Queen of Hearts is a portrait of a woman who manages to lose everything and nothing at the same time,” wrote programmer Kelly Young of Danish writer-director May el-Toukhy’s debut feature. Co-written by Maren Louise Käehne and co-produced by Caroline Blanco, the project won the World Cinema Dramatic Audience Award at the 2019 Festival, where audiences were riveted by Trine Dyrholm’s lead performance. [WATCH]

A story of tradition, modernity, and divided family, Sand Storm upends expectations,” wrote our programmers of this 2016 Festival feature from Israel. “At its core, [writer-director] Elite Zexer’s mesmerizing debut feature portrays the emotionally layered relationship between mother and daughter, both bound by custom while struggling to adapt to a changing world.” The film — edited by Ronit Porat, and co-produced by Estee Yacov-Mecklberg — took home the World Cinema Grand Jury Prize: Dramatic in Park City. [WATCH]

Brazilian writer-director-produced Anna Muylaert’s moving drama was given a World Cinema Dramatic Special Jury Award for Acting at the 2015 Festival, thanks to a knockout performance by Regina Case as Val, a live-in housekeeper for a wealthy family in São Paolo. Lensed by Barbara Alvarez, edited by Karen Harley, and co-produced by Debora Ivanov, the project offers “a fresh, contemporary spin on class in Brazil, wrapped in a deeply moving story of what belonging and family mean,” wrote former Festival programmer Caroline Libresco. [WATCH]

“[Uruguayan writer-director] Lucía Garibaldi’s first feature pulses with foreboding, sly humor, and a simmering explosiveness that’s delightful to watch unfold,” writes programmer Ana Souza of this 2019 Festival selection, which was co-produced by Isabel García. “Through isolated landscapes, a captivating synth score, and a calmly defiant lead, Garibaldi explores a lonely world where teenage desire fluctuates between the routine and the dangerous.” [WATCH]

“Set in the ’80s and based on writer-director Joanna Hogg’s real-life experiences, The Souvenir elegantly elevates quotidian moments into a story of unforgettable love,” our programmers wrote of the British drama starring Honor Swinton-Byrne. “The intensely naturalistic dialogue hints at the characters’ disquietude and vulnerability as they slowly unravel.” The film — co-produced by Hogg and edited by Helle Le Fevre — won the World Cinema Grand Jury Prize: Dramatic at the 2019 Festival in Park City. [WATCH]

“The Summer of Sangaile is a rare film that takes you by surprise with the honesty of its performances, the poetry of its narrative, and the crispness of its cinematography, which captures the beauty of the girls and the unique Lithuanian scenery equally well,” wrote our Festival programmers of Lithuanian filmmaker Alanté Kavaïté’s debut feature. Co-produced by Zivile Gallego and edited by Joëlle Hache, the film takes viewers into a sweet budding romance between two teenage girls (Julija Steponaityte and Aistė Diržiūtė). [WATCH]

Australian writer-director Jane Campion’s 1989 drama played the 1990 Sundance Film Festival, where it was lauded for fearless performances by actors Genevieve Lemon and Karen Colston, among others. Lensed by cinematographer Sally Bongers (whose earlier credits include Trish Fitzsimons and Mitzi Goldman’s 1987 Festival drama Snakes and Ladders), Sweetie was edited by Veronika Jenet. [WATCH]

Indonesian writer-director Mouly Surya and co-producer Tia Hasibuan’s elegant debut feature centers on a group of students at a high school for the visually impaired as they attend classes, pursue artistic endeavors, and fall in love. “With gentle humor, playfulness, and heightened realism, What They Don’t Talk About… draws out the poetry in its characters, highlighting the magic in their lives and respecting who they are,” wrote our programmers in 2013, when the film premiered in Park City as part of the World Cinema Dramatic Competition. [WATCH]

“Director Marialy Rivas’s handsome debut feature is a playful and energetic coming-of-age story about a young woman who refuses to make choices that limit her pleasure,” wrote Shari Frilot of this Chilean drama from the 2012 Festival, which Rivas co-wrote with Camila Gutiérrez. “Brought to life by an attractive cast, led by the enigmatic Alicia Rodríguez, Young & Wild romps through the burning fires of religious fervor and youthful sexual energy to deliver a delightful portrait of contemporary teenage life in Santiago.” [WATCH]