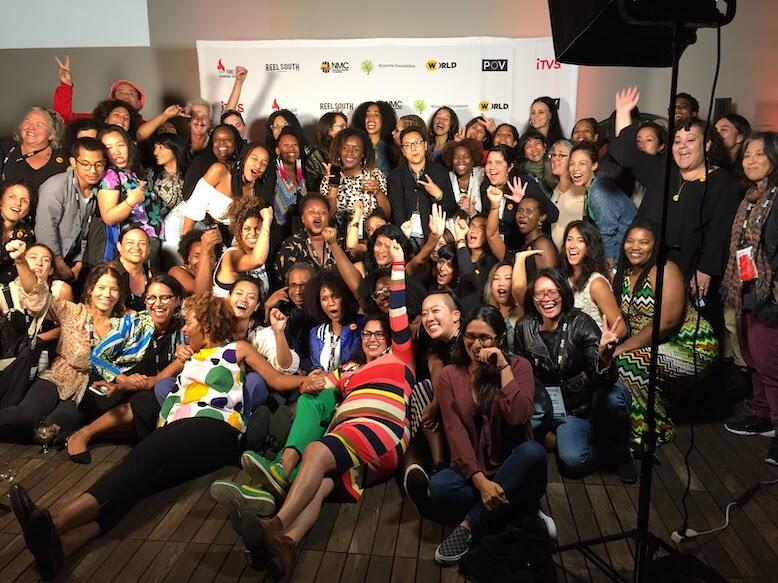 At the Sundance Institute, we firmly believe that Black artists and Black stories should be celebrated and uplifted year-round. During February, aka Black History Month, we’re continuing that work with a series we’re calling Black Visionaries, in which we’ll be spotlighting our friends at Black-run arts organizations around the country. Last week, we talked with Brooklyn-based nonprofit Firelight Media, and this week we’re chatting with filmmaker Iyabo Boyd, founder of Brown Girls Doc Mafia.

Based in Brooklyn, Boyd founded Brown Girls Doc Mafia in fall 2015 with the aim of bolstering the creative and professional success of women and nonbinary people of color working in the documentary industry, and to challenge the often-marginalizing norms of the documentary field. The group—which has become a vital year-round collaborator, deepening our support for artists of color—now has more than 3,300 members around the globe, and it continues to grow.

This was Brown Girls Doc Mafia’s fourth year attending Sundance, and we’re proud to have been able to support 83 members with access to the Festival! We were also thrilled to celebrate 11 incredible films and new media projects directed by BGDM members featured at the Festival this year, with 24 members holding crew positions on Sundance films overall.

We were also excited to hold a few events at the Fest, the first being a live panel in partnership with A-Doc called “Brown Girls and the New Frontier” with three new media projects featured in the Festival’s New Frontier section led by BGDM members Violeta Ayala, Grace Lee, and Michèle Stephenson. We partnered with CNN Films for a conversation with veteran filmmaker Dawn Porter and rising talent Salima Koroma about artistry and activism. And we hosted A Liberatory Lens, a special live podcast from documentary field leader Sonya Childress and academic Ligaiya Romero about art, journalism, and storytelling for justice.

Overall, it was a full and overwhelming Festival as usual, but it was wonderful to still feel that special Sundance energy virtually!

Our industry is in a very transitional, exciting time! We’re past due for some major shifts in terms of where the “powers that be” place value—let’s keep rewriting that narrative.

As a filmmaker, I find inspiration for each of my projects in music, photographs, and cinema. I’m currently developing a comedic drama feature (supported by the Sundance Institute) called Kayla & Eddie en Français about a recovering addict father reconnecting with his workaholic daughter as they explore the African hipster scene in Paris.

The artists that have inspired me throughout my creative process include musicians Christian Scott, Francis Bebey, and Hailu Mergia; photographers Jack Garofolo and Raghubir Singh; and filmmakers Andrew Dosunmu, Lulu Wang, and Céline Sciamma. I’m also incredibly inspired by the family and friends I’m collaborating with and working to pull out the latent artist inside of them!

My advice for up and coming leaders of color is: Do things differently. Our industry is in a very transitional, exciting time! We’re past due for some major shifts in terms of where the “powers that be” place value—let’s keep rewriting that narrative. Take the time to network with the folks already in “the room,” but put energy into making your own room, and invite everyone along for the ride. Always speak your truth, learn how to fundraise and pay your own way, and don’t forget to communicate with and lean on your community for support.

BGDM is always looking for new members to welcome, partners to collaborate with, and funders to support our mission to bolster the creative and professional success of women and nonbinary people of color working in the documentary industry. Folks can learn more about BGDM at browngirlsdocmafia.com, where you may peruse our extensive BGDM Member Directory to hire BIPOC production crew and industry executives.

You may also sign up to become an ally and/or support us with a donation, grant, or sponsorship! If you self-identify as a woman or nonbinary documentary professional of color, please apply to join our community here. Contact us anytime at bgdm@browngirlsdocmafia.com and be sure to follow us on Instagram, Facebook, and Twitter.