So Many Stories Will Be Lost If We Don’t Tell Them: Sundance Institute Celebrates Artists of Color in Los Angeles 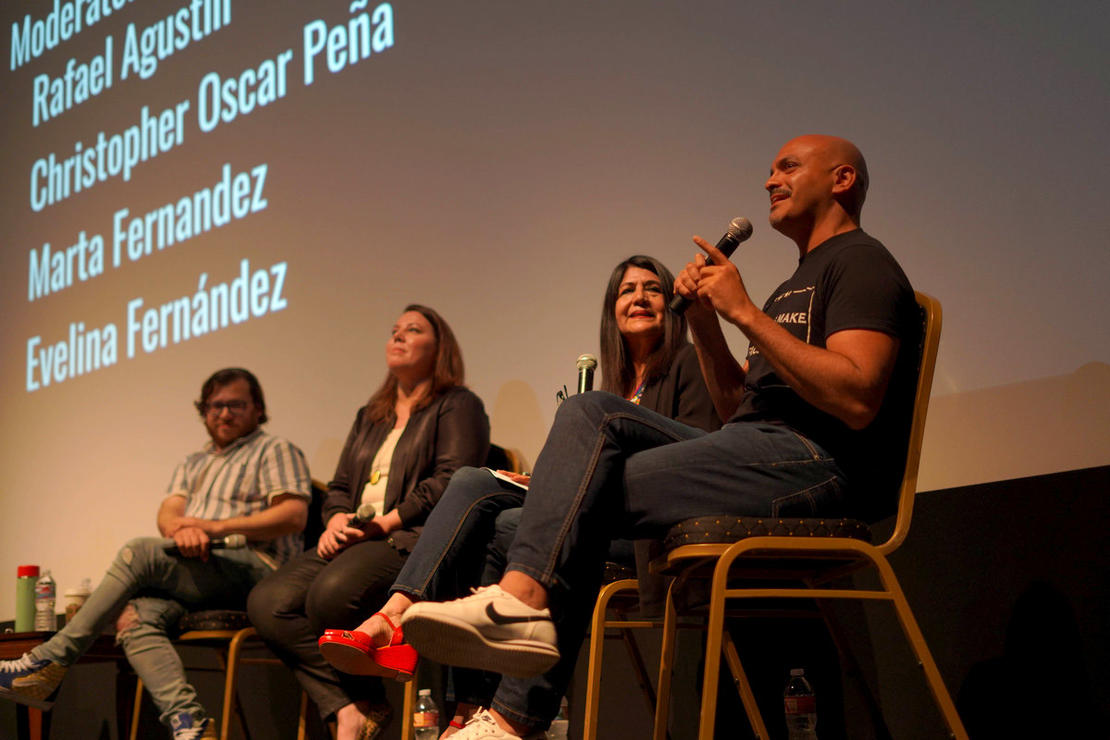 Sundance Institute and the Latino Theater Company brought together local Latinx creators at the Los Angeles Theatre Center in early September for a panel discussion, followed by a Playwriting Intensive for LA-based emerging playwrights of color hosted by Center Theatre Group.

At the panel discussion, four artists shared their personal journeys, offered guidance for navigating a career as a writer, and called for change within the industry. East LA native playwright and screenwriter Evelina Fernández (A Mexican Trilogy, East Los High) told the audience that the reason she continues to tell stories about the U.S. Latinx experience is because “people of color have participated in the history of this country from the very beginning and you never see them. … There are so many stories that [will] be lost if we don’t tell them.”

Actor and writer Rafael Agustín (Jane the Virgin, N*W*C) shared that seeing representation on screen as a kid had a lasting impact on him. “I remember watching The Sandlot, just a regular American movie, and I was like, ‘Who is this little brown kid [Benny “the Jet” Rodríguez] in the ’50s playing baseball?’ … It didn’t compute.” For writer and 2015 Theatre Lab alum Christopher Oscar Peña (Insecure, Sweetbitter), it was just recently that he had a similar experience when his family watched Disney’s Coco.

Though it may feel like the tide is shifting, studio executive Marta Fernandez worries that “the press is overindexing on what is actually happening in the industry. There’s only a very small handful of Latinx shows on TV … and even if they are Latinx, they’re not created by Latinx [artists].” Fernandez is the president of MACRO Television Studios, which produces content driven by people of color. Creating change, she says, will require action from the Latinx community at large: “If you want to see more of the content, you have to watch it and talk about it and rally around it. If not, the message that the networks get is that nobody’s interested—and that’s just not the truth.”

Fernandez’s advice for those looking to create those stories is simple: “If you’re a writer, write your stories. You just have to go do it and stop waiting for someone to say, ‘Yes, go do that.’” And when pitching that story, you have to answer two questions and two questions only, according to a tip Agustín learned at the Sundance Institute Episodic Lab: (1) Why is this the most important story in the world and why does everyone need to hear it? and (2) Why are you the most important person to tell it?

Following the panel, LA community members and industry continued the discussion at a reception, and the next day six LA-based playwrights got the chance to workshop their scripts at a Playwriting Intensive—where they received individualized feedback from local theatre and performing arts legends Luis Alfaro, Shelby Jiggetts-Tivony, and Diane Rodríguez. Read more about the selected artists and their work below.

John Guerra, The Last, Best Small Town—Two neighboring families, one Latinx and one white, live in the small Southern California town of Fillmore. As the turning of the 21st century unfolds, the children come of age, fall in love, and suffer loss, as they continually hunt for the better life their parents promised.

Chloe Hung, Three Women of Swatow—In this comedy-drama, three generations of women grapple with their dark history, emotional inheritance, and the ties that bind mothers and daughters.

Marie Hanhnhon Nguyen, Ten and a Half—Ten and a Half follows the unraveling of two Asian American women after a fateful meeting with a handsome stranger. Together, they wrestle with questions of consent, agency, and the impact of the sexualization of race on identity.

Gabriela Ortega, Out Here—Two Latinx high school sweethearts, Lucia and Junior, win the lottery for the last two tickets on the first commercial trip to space. When chaos strikes, we find that the spaceship is not the only thing that wrecks. Through the eyes of Lucia, Out Here is a part odyssey, part space comedy about what makes a life extraordinary, and what is worth dying for.

Ayesha Siddiqui, Water Lily—A woman returns home after a long absence to save her grandmother’s cabin that sits on protected marshland. Moving between the past and present worlds of the characters, a history of dreams, loss, and paralysis to the changing world around us is revealed.

LaDarrion Williams, Coco Queens—In the small town of Helena, Alabama, during the 1970s, four African-American women grapple with the challenges of forgiving after deep-seated hurt and resentment have settled in, learning to love despite the odds and embracing what it means to be a black woman.

This program was created by Sundance Institute’s Outreach & Inclusion Program and Theatre Program.