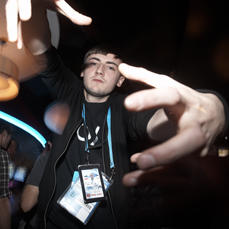 Animator David OReilly isn’t exactly a new kid on the block. Sure, he’s considered up-and-coming, and his 1985 birth year doesn’t exactly qualify him as an age-old veteran. But instead of resting on his laurels after his 2010 short Please Say Something—which screened at the 2010 Festival, won the Golden Bear at the Berlin Film Festival, and Grand Prize at the Ottawa International Animation Festival, among others—he’s hit the ground running with another edgy, twisted, hysterical follow-up venture, The External World, and has graduated quickly from the moniker of “kid” to something a bit more seasoned … with probably an expletive thrown in front of it to really give his work the proper justice it deserves.

OReilly, born in Ireland and currently living in Germany, sets himself apart from other animators by his process alone. Self-taught, without conventional schooling, he experiments with software. Influenced by a combination of Norman McLaren, Oskat Fischinger, and “browsing 4chan while watching Tarkovsky,” David’s aesthetic may seem simple to some and downright sacrilegious to others: “My technique is to basically cut out all the crap which holds other 3-D production back,” OReilly says. “In other words, I don’t polish the turd – I let a turd be a turd.”

His latest short The External World, which can be described as 15 minutes of animated absurdity and total 3-D generated chaos, comes with a parental warning best addressed by OReilly himself (“F*ck censorship. F*ck censorship right in the b*lls”). The film took nine months from start to finish to complete: a few months designing and modeling, three months for the actual animating, and a tight finish for the Venice Film Festival after an early cut granted him the invitation. The film was co-written by collaborator Vernon Chatman and produced by Henning Hamm (who produced the short Wagah, which screened at the 2010 Festival); OReilly met Hamm at the 2010 Festival.

“Within about 12 hours of us meeting, [Henning] arranged funding for my next project, so it was a good beginning,” OReilly recalls. And what a beginning it has been so far … in such a short period of time, OReilly is quickly becoming one of the most popular animators of his time, taking his place along with now-legendary names such as Don Hertzfeldt and Bill Plympton, just to name a few. With each festival he plays, and every award he wins (he has already nabbed an EFA nom at Venice), OReilly is garnering a rabid fan base eager to consume anything new from the animator.

OReilly still hasn’t completely embraced the for-profit-model like others, despite his fans’ demands for his new work. “To be honest, I learned filmmaking from illegally downloading hundreds of films, [so] it only makes sense to put my work back on there,” OReilly suggests. “The distribution side of things is a bit of a wild west at the moment. I’m experimenting with it but I generally don’t mind putting stuff out for free.”

As for his expectations for the 2011 Sundance Film Festival, OReilly is looking forward to seeing other filmmakers’ work this year. “Sundance was quite hectic last year,” he recalls. “By the time I figured out how it all worked, it was time to go home. I’m looking forward to actually seeing films this time,” OReilly explains. “I love different festivals for different reasons. The greatest experiences are sadly often obscured by gigantic hangovers, so I have to rely on secondary accounts which are equally unreliable.”

OReilly has plans to pass the time between screenings. “I plan on throwing snowballs at the ground for making me slip all the time,” he confesses. “It doesn’t help matters but it restores a modicum of self esteem.”

Be sure to check out The External World playing in Shorts Program I.