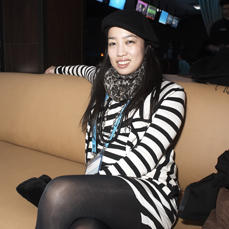 Don’t bother confining Yi Zhou to a single artistic medium. The young Chinese artist considers the collision of art forms essential to conveying the surreal landscapes presented in her work. Her 2011 Festival short, The Greatness, is featured in this year’s Animation Showcase and fuses 3-D animation with sculpture and film to take the audience on a computer-generated voyage inspired by Dante’s Divine Comedy. She attended the Festival with her previous shorts Paradise (2008) and Hear, Earth, Heart (2009), which similarly incorporate elements of surrealism presented in a nature landscape. Merging European artistry (she was raised in Rome) with Chinese culture, Yi Zhou’s installations have evolved — or perhaps her audiences have — from inciting general confusion to garnering praise for their artistic depth and innovation.

How did the idea for The Greatness come about?

Yi Zhou: The Greatness is a sequel to a previous short film I did in 2009 called The Ear. This film is entirely made in 3-D, and I basically explored different programs and different layering of technologies. It’s completely computer-generated, and I tried to do a lot of research and focus on new ways of expressing my idea. I linked this film with The Ear by having musician/producer Pharrell Williams play the lead. It starts with Pharrell’s face formed to a vase. The vase breaks and then the film starts and takes a journey through the realm of hell. It takes you to the center of hell and then takes you back and brings you through an abstract paradise.

You blend film, animation, music, sculpture, and more in your work. How did you become involved in such an eclectic mix of art?

Yi Zhou: I think because we live in a world where things are much more open and less traditional, especially the way we perceive the idea of being an artist. So I think it’s much more acceptable to not just focus on one medium. When I first started, in 2005, I had a show in Paris and people were shocked because they said it looked like there were five different artists in the show, and too many different media, and it was too confusing for the people to understand what I was doing. They said you have to focus on just one thing—either you’re a painter, or a filmmaker, or a sculptor, but you can’t be all of them together. But I believe that upcoming generations will find it much easier to express themselves through different media rather than focusing on one medium.

Talk about the role of dreams in your work…

Yi Zhou: In dreams there is no border between past, present, and future; everything is mixed in the same time zone. I think that’s something that’s very important in my work. But there’s also no geographical boundaries or barriers. The Greatness is made through a vertical descending line, a very linear pattern. It’s almost like falling into the center of hell, then into an imaginary realm, and then you’re pulled back up all of a sudden. And that’s something that was challenging to present.

Ennio Morricone (The Good, the Bad, and the Ugly; In the Line of Fire; The Untouchables)brings a haunting score to this short. What was your experience like working with him?

Yi Zhou: We went into the studio and spent a lot of time working together. It was a great honor for me to be able to work with him, and he was excited as well. Ennio came to the studio and took some notes on the unfinished version of the film. I was really impressed to see how much attention he put into the project, and the fact that he’s never done anything involving a film made with computer graphics.

How did this unlikely professional relationship with Pharrell Williams come to be?

Yi Zhou: We met on the set of a film and I had the chance to show him some of my work and he liked it. So when I wrote the script for The Ear he liked it and agreed to play the lead. That’s how it got started. I’m really grateful to him for his support. It shows, contrary to the idea one can have, he’s one of the few people that can really take on a project because he believes in and wants to support a person. He told me, “I’m doing this because I want to support you.” I will always be grateful to him for doing that.

What are you looking forward to at the 2011 Festival?

Yi Zhou: Well, this is the third time I’ll be in competition at the Festival. I think Sundance is one of the few festivals in the world that places a legitimate importance on animation and supports artists like me who work with small crews. It’s a great chance for us to be selected and for our work to receive visibility. A film takes months of research and personal and emotional involvement. I’m grateful that there’s a place for people like me at Sundance.