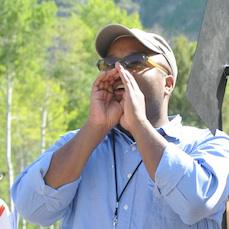 A veteran of both the Sundance Film Festival as well as Sundance Institute’s Feature Film Program, accomplished short filmmaker Moon Molson marks his return to the Festival this year with the world premiere of Crazy Beats Strong Every Time. This hefty character study follows a night in the life of an African-American twenty-something suddenly saddled with the burden of dealing with his deadbeat stepfather who has abruptly come back into his life by way of passing out drunk in the hallway of their housing project. Molson credits the inspiration for the subject matter “from some of the people I grew up with.” One of them was an African-American child from the projects who had a brilliant stepfather, originally from Africa; he also happened to be an alcoholic. “Although his stepfather wasn’t the stereotypical abusive drunk—in fact, he was a gentle soul that read voraciously and spoke multiple languages—let’s just say that when he drank, things happened,” Molson recalls. Anchoring Shorts Program III, Moon has infused an elegant narrative with a strong command of storytelling and environment, supplemented by substantial production value and captivating performances bound to engage audience attention.

Molson’s first encounter with the Festival was in 2007 when his debut short Pop Foul, currently available to view on the Youtube Screening Room as a “Sundance Classic,” made an early stop in Park City on its festival tour. “I remember the Sundance audience being the most enthusiastic and engaged audience I have ever encountered at any film festival,” Molson recalls. “All my screenings were sold out and nearly the entire audience at every screening stayed for the Q&A. Sundance seemed like a festival at which the audiences were as excited to see short films as they were to see the features.” Completed while Molson was enrolled in Columbia University’s graduate film production program, Pop Foul impressed the short film programmers with its uncompromising depiction of simmering adolescent emotional turmoil that skillfully built to a devastating conclusion and earned the up-and-coming director a place on Filmmaker Magazine’s “25 Faces to Watch“ list that year. The short went on to play over 100 international film festivals, racking up a multitude of prizes.

The following January, Molson participated in the 2008 Sundance Institute’s Screenwriters Lab to cultivate his feature-length script Meadowlandz, from which the short Crazy Beats Strong Every Time was eventually adapted. The filmmaker found the nurturing experience of the Lab to be “in a word: incredible!,” Molson says. “There’s nothing more like heaven than for you, as a fledgling screenwriter, to be able to go ‘kick it’ at a mountain resort with a bunch of super-talented professional screenwriters—some even Oscar winners—who have all come there to help you workshop your little half-crappy script into something decent. I just wish I could do it again.”

He further developed the project when he was invited to the Directors Lab that summer. While there, he worked with actors E.J. Bonilla, Shawn T. Andrew, and Anthony Gaskins, whom he ultimately placed in the completed short. The remaining actors, including lead Dante E. Clark, came courtesy of Liz Ortiz-Mackes at Casting Solutions, the same company used to cast Pop Foul. After workshopping his script at the Labs and receiving several fellowships for his finished draft, Molson and his team made efforts to get the film made, but initial attempts to fund the project left them frustrated: “Back then, I thought that armed with a decent short film and a strong feature script, I could get an independent film financed; I don’t think that anymore,” Molson laments.

Not one to let the system beat him down, Molson turned to the short form once again. But constructing a new short was not without its obstacles. “Money was the biggest challenge I faced,” he acknowledges. “I simply didn’t have enough funds to make this film,” Molson says. He went into production anyway. “I then immediately got hit with L&D (loss and damage) fees so terrible that they decimated nearly a quarter of my budget and stalled production for months. This happened more than once.” After putting together a successful Kickstarter campaign, Molson was able to charge back into production in time to get a cut to the Festival’s shorts programmers.

Since receiving his acceptance to the Festival, Molson and his team have been hard at work putting the piece through the always-grueling post-production process. He is particularly excited about the sound design and mix, recently completed by those giants of movie magic Skywalker Sound, just in time for its Festival debut. As in 2007, Molson is just as anxious to see the finished film on the big screen with a Festival audience. And while he still plans to make Meadowlandz a reality, next up for Molson is “finding a real job,” he says. “Not kidding. After that film school charade, I have some scary student loans to pay.”