Short Shot: Instead of Abracadabra, a Lot of Humor 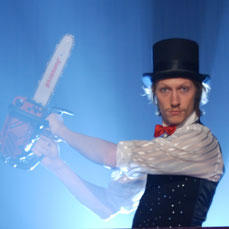 Even when he eventually ventures into longer format storytelling, director Patrik Eklund, director of the beguiling short Instead of Abracadabra, doesn’t plan to give up short form content. “I love the format and the freedom,” says the Sweden-based filmmaker, who heads to Park City with a film that sheds comedic light on and reveals the heart in the timeless practice of magic.

Instead of Abracadabra is the hilarious, endearing story of a 20-something slacker who lives at home with his disapproving parents and has only one goal: to be a great magician.

The concept for the film was born when Eklund cut a show reel for a local magician, which included four hours of material and, naturally, some bloopers.

“You could really feel the panic when something went wrong and how he acted to cover things up again,” Eklund says. “I felt I just had to do something that had the same sort of nerve. I’m a huge fan of magic and have nothing but respect for those who dare perform it, especially the Swedish Super Wizard Joe Labero.”

After two versions of the script (a dramatic attempt and a comedic one that finally stuck), an impressively short 4-day shoot (the film is 22 minutes long) with expert prop makers who made sure no swords went through performers, and a full month of editing, the short was complete. It has since screened at a number of film festivals and received much praise, due in part to the combined talents of Eklund, producer Mathias Fjellström, cinematographer David Grehn, and a handful of memorable performers. In addition to being a part of Shorts Program 3, Instead of Abracadabra can be downloaded for free from iTunes from January 15-25.

Bengt, the father of the magician, is played by Jacob Nordenson, who has worked with Eklund on virtually every film he has made. Tomas the magician is played by Simon Berger, who had just finished acting school; Eklund saw him on a Swedish TV series called Upp till Kamp. “I told him to grow a moustache and then it all fell into place,” Eklund says.

“It’s quite heavily rehearsed and new things always pop up during rehearsal,” Eklund mentions when citing how bits of improvisation made its way into the final piece.

As for his trip to the Festival, Eklund’s only agenda is to take every moment as it comes. “Hopefully I’ll get to see a lot of great films and meet interesting people,” Eklund says. “[Instead of Abracadabra] has been very well received at various festivals, which is a great relief to me. I didn’t think it was so funny after a lot of rewrites and a lot of editing. A joke gets outdated pretty quickly. Now it’s just a pleasure to hear that some people find it funny.”