Short Shot: Going Beyond Just Acting for the Camera 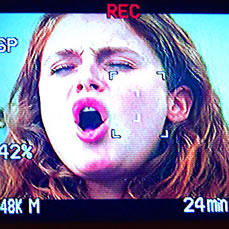 One thing about Justin Nowell is clear: he’s not solely concerned with pleasing the crowd. Nowell, returning to Park City for the second time since a successful 2008 Festival run with Sick Sex, doesn’t have false expectations about how his newest film, Acting for the Camera, will go over.

That’s primarily because of the way Sick Sex was received at last year’s Festival. “Sick Sex was a very polarizing film – some people really love it and some people have nothing but extreme contempt for it,” Nowell says. “And I expect the reaction to Acting for the Camera to be similar.”

An NYU alum, Nowell has always had an eye for, or perhaps more appropriately in, a film camera. Along with the creative coupling of his brother (and cowriter) Tommy Nowell, and a few allies he met at NYU (producer and Sundance veteran Todd Barnes, and director of photography Grant Greenberg), Nowell’s creativity was sparked at an early age as he got involved in children’s theatre and came across his dad’s Super-8 camera. His education continued in a “long and expensive, but terrific” tenure as a student in New York before graduating in 2006.

What soon resulted is work that challenges as much as it entertains, especially in the case of Acting for the Camera. The plot, involving two students rehearsing the beloved orgasm scene from When Harry Met Sally, starts out familiarly enough before turning on its head and revealing what happens when a tempestuous teacher gives some questionable direction. And although the tone of Acting for the Camera becomes darker and more uncomfortable, the film somehow seems more hilarious. Therein lies the twisted beauty of the brothers Nowell.

The idea for Acting for the Camera grew out of Justin’s desire to work with Joseph Urla (the teacher) and Mallory June (Joanna). He once saw Urla perform on stage and instantly wanted to work with him; he met June through a friend and tried to make the pieces fit. “Tommy and I were immediately tickled by the thought of pairing those two up and watching them duke it out,” says Justin. “So the scenario for Acting for the Camera was our answer to that perverse arithmetic.”

While the film does have a certain documentary feel, none of it was improvised. They shot the 14-page script in six hours exactly as Tommy had typed it on the page. “I wanted to shoot in front of a real acting class,” Justin continues, “so I knew from the outset that we’d have to be incredibly well-prepped.”

“Well-prepped” was a combination of one full-day of rehearsal and some strict blocking. The extras, who provide a great deal more than just decor, were expertly cast from a genuine Acting for the Camera 101 class that producer Barnes was teaching.

“Todd told his kids about the project itself,” Justin explains. “As you know, the subject of the short and some of the revelations in it are going to trigger some strong reactions, so Grant and I planned our coverage to capture that on our first and second takes of everything, when we knew they’d be most surprised and completely horrified.”