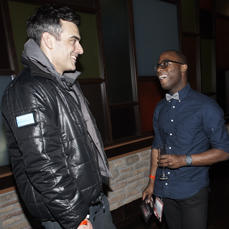 Fast becoming an expert in the fiction short-form, British filmmaker Daniel Mulloy makes his third appearance at the Festival this year, bringing with him the masterfully executed Baby. Mulloy previously premiered the BAFTA-winning short Antonio’s Breakfast at the 2006 Festival, and subsequently returned to Park City the next year with another short, Dad. Screening at the close of Shorts Program IV, his newest piece follows the alluring aftermath when a young woman intervenes in a mugging. Just before this year’s Festival began, Mulloy spoke about the new short, his Festival experiences, and his plans for the future.

What was the inspiration behind making the film?

Daniel Mulloy: I wanted to make a film about an intense relationship and how it evolves over a very short period. Power can shift so quickly and I really wanted to create a scenario in which I could play with a relationship that develops fast between two unlikely strangers. It’s weird how intimacy can develop between people who don’t know one another. The idea grew from an experience I had – I travel routinely on the subway and get off at the same stop every day. I then walk a hundred metres to the bus stop. Like most people, I keep to myself, comfortable in my own world. I was in this routine when I saw a woman being pick-pocketed. I interrupted the thief just as Sara does in Baby. It turned out to be a crew working together – they pulled out knives. The bubble of my routine was popped. I wanted to put my lead character into a similar scenario, then watch as she is followed onto the bus by one of the guys. I find situations I’ve experienced can be good triggers for developing stories.

What’s your background as a filmmaker?

Mulloy: I came to film from art and I started art because I used to draw in school. I drew because I couldn’t read or write due to dyslexia. It’s funny that now, having learnt to read and write late, I’ve grown to love my time spent enthralled in typing stories instead of drawing them.

How did you find your cast?

Mulloy: I was looking for the lead actress for a long time. I put offers out to one, then two, then three actresses that I thought could be great for the role. It’s a very tough part to take on and no actress I approached, through the casting director, was interested enough to even have a meeting. This meant a week or two before the shoot, we still had no one for the lead. The producer, Ohna [Falby], told me to check out a clip on YouTube. It was from a film she had seen in Cannes. I watched the beginning of the clip and within seconds I knew that the actress I was watching would be perfect for the part. The actress was Arta Dobroshi and the clip was from Lorna’s Silence in which she gives a devastatingly amazing performance.

Mulloy: I have extremely good memories of Sundance. I got my first film, Antonio’s Breakfast, into Sundance in 2006 and it made me realize “there really is a chance I can do this.” I watched some powerful films and made friends that I still have today. Mid-way through the 2006 Festival, I found out my film was nominated for a British Academy Award. That 2006 Sundance felt to me like the beginning of something, of a new kind of confidence in what I was capable of. I had set up my own film company, not get a job at anyone else’s, and now I had made a film and people where watching it at Sundance. I had worked with the ‘none actors,’ young men in the film, for over a year prepping before we shot it, and I can remember thinking every day that I wished they were there at the screenings to hear the responses to their performances – many of them didn’t think too much of themselves, had low confidence in their ability and I wanted them to hear all this praise they were getting.

Has your perception of independent film changed since then?

Mulloy: I think the core of independent film today is the same as it was back in 2006 and 2007 – it is about people making stories they are passionate about. The distribution and production mechanics may be changing, but I think the drive comes from the same place.

Is there anything you took away from your previous Festival experiences that will impact how you choose to spend your time at the 2011 Festival?

Mulloy: Yes, definitely! Baby will be my third short playing Sundance. This Sundance will be the first I’m attending with a feature script that I want to go and make in to a film. Sundance has been more than instrumental in helping many filmmakers move across to features and it is a great place to push projects forward. The people I’ve stayed in contact with and who have become good friends through Sundance are those I’ve met at screenings, at parties, on the shuttle and in line. I think Sundance is a place where the kind of relationships a filmmaker grows to cherish are formed.

What’s your next project?

Mulloy: I am writing my first feature, A Cold Day. I want to carry through the intensity of the shorts and create something powerful that goes further and into more depth than anything I have done before.