From the Archives: Digging into Michael Winterbottom’s ‘Shock Doctrine’ 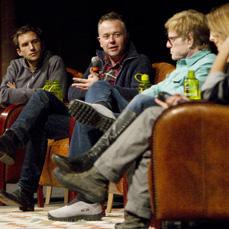 Based on the best-selling book by Naomi Klein, The Shock Doctrine explores the rise of disaster capitalism over the last half-century. Connecting post-war experiments in electro-shock treatment with the radical free-market capitalism espoused by Milton Friedman, Klein posits an alternative history in which corporate interests both compel governmental collapses and remake systems to their advantage, pointing to Shock Doctrine opportunism in countries such as Chile, Argentina, England, Russia, and the current U.S. interventions abroad.

Filmmakers Michael Winterbottom and Mat Whitecross weave together Klein’s own words and first-person reportage with archival footage and animation, adapting the book into a potent visual wake-up call. After the Eccles Theatre screening, Klein, Winterbottom, and Whitecross were joined onstage by the founder and president of the Sundance Film Festival, Robert Redford, and moderator Richard Kim, senior editor at The Nation.

Richard: I want to preface our discussion by saying that we should really be precise when we talk about The Shock Doctrine the book, The Shock Doctrine the movie, and the Shock Doctrine the idea, which was the creation of Milton Friedman. This can get confusing, so I think it’s important. Bob, through the Sundance Film Festival and Institute you’ve been such a powerful advocate for the intersection of film and ideas. Can you talk about how this film fits into that mission of Sundance, and what drew you to it?

Robert: What drew me to the book was that someone had looked at a situation today that was dire and disastrous and impacted our country in such a negative way, and traced it back to the original seed of where it all began. That really got me because I’d never seen anything with that long a thread. We don’t have enough interest in history in this country to learn from the mistakes that we’ve made. In my lifetime, from the Second World War to McCarthyism, from Watergate to Iran-Contra and through to the sinkhole of the last eight years, there are patterns that keep repeating themselves.

When are we going to look hard enough at these moments of history so that we won’t repeat them? This book did a very fine job of making us look at history. In terms of film and Sundance, I like to feel that after 25 years of the Festival Sundance speaks for itself. From a socially active point of view, what I like is that these are stories that tell the truth about situations. The stories of this Festival really form a collective. I can make a film, Michael can make a film, but when you can collect a lot of films that make us look at ourselves, and at our negative sides, to me that has value.

Richard: Naomi, The Shock Doctrine did so much to discredit Friedman’s ideas, but unfortunately those ideas are very much alive today. You can see disaster capitalism already at work in Haiti. Can you speak a bit about how the disaster capitalism that followed the tsunami and Katrina is being put into action there?

Naomi: One of the most dramatic examples that I use to demonstrate what I mean by the Shock Doctrine is that after the levees broke in New Orleans, when the city was still under water—just ten days after the levees broke—the Heritage Foundation in Washington held a meeting. They came up with a list of what they called “free market solutions” for Hurricane Katrina. It was everything from privatizing the school system to closing the housing projects and replacing them with condominiums, allowing contractors to not have to pay a living wage, etc.

Then the Bush administration checked them off one by one. It really was a war waged on the public sector. After the earthquake in Haiti, the Heritage Foundation didn’t even wait 24 hours before putting up a notice on their website, saying that this was a crisis but also an opportunity to remake Haiti’s economy. There has been a little bit of progress though. They took it down the next day because there was such an outcry.

Richard actually reported in The Nation that in the middle of Haiti’s crisis the International Monetary Fund announced a $100 million loan to Haiti, which is quite outrageous. A country that is already so heavily indebted, and instead of getting grants they would be getting loans. And of course these loans often come with conditions, like privatize your health, your education, your electricity, and Richard revealed that these conditions did apply to the Haiti loan.

The good news is that within five days 30,000 people had joined a Facebook group called No Shock Doctrine for Haiti, and there was such a backlash that the IMF, for the first time that anyone can remember, announced that they would endeavor to turn the loan into a grant, and that there would be no conditions. They announced this publicly so that we can try to hold them to it.

The Shock Doctrine is all about exploiting the fact that when there’s an emergency, this is the last thing anyone is thinking about. In fact, our minds almost rebel at the idea that anybody could be thinking about privatizing Haiti’s health care system. The fact is they are. And this has happened again and again. But people are on to it, and that makes it harder to get away with it.

Richard: Michael and Matt, Naomi’s book is over 50 years of history, it sprawls over five continents. There must have been incredibly difficult choices you had to make in adapting the book into a different kind of art. Can you talk a bit about the process that you went through and what was guiding you?

Michael: The real challenge was the scope of it. We just tried to keep the narrative as simple as possible. In film you probably need more of a narrative than you do with a book, so we followed the shape of Naomi’s book and the chronology of the spread of the ideas. The difficult thing was deciding what to leave out. We had lots of footage from lots of countries and lots of situations, which in the end are not in the film, because we needed to find a rhythm and shape that would be watchable in a cinema.

Richard: Is there a version of the Shock Doctrine going on right in the U.S., pushed by the Obama administration, in a time of great economic suffering?

Naomi: I think it’s been going on for a year and a half, and we just got the bill for the multi-trillion dollar bank bailout. My fear, always, as this money was being shoveled out of public coffers into private hands, was that it wasn’t simply stabilizing the economy. A private-sector debt crisis, the debt crisis that the banks had gotten themselves into, was becoming a public sector debt crisis.

With Obama, we had a year of semi-Keynesianism with the stimulus bill, but I think he just caved into Fox News. He did not hold his ground. And now he’s asking regular people to pay the price of bailing out the elites. I do believe it’s a Shock Doctrine moment, and I do believe people should resist it and challenge it.

I think it’s been a tricky year and really disorienting for people, because at the same time that we see this incredible transfer of public wealth into private hands, we have this rightwing discourse, spearheaded by Fox News, claiming that Obama is some sort of weird mix of Karl Marx and Malcolm X, and that this is now a socialist country. It’s really hard for people to wrap their heads around the fact that it’s precisely the opposite.

Richard: I was really struck, watching all of the great archival and behind-the-scenes footage in the film that I had never seen before, by what a lousy job we in the media do, day-in and day-out, covering what is going on. As filmmakers what do you see your role is, and how do you work in this 24-hour news cycle, and what can your impact be?

Michael: One of the problems of making the film was that things were happening while we were making it. When we started, the financial crisis hadn’t really happened, so we had to adjust things. As Naomi says in the film, the Shock Doctrine depends on people not realizing what’s happening, yet in this financial crisis everybody realizes this was caused by deregulation, and caused by the ideas of Friedman.

There’s a huge amount of anger in Britain about the fact that banks are still taking billions out in personal bonuses after we spent so much money subsidizing the banks. And yet there’s no political response to it. There’s been no articulate response from the left. As you say, crises are opportunities, but the left hasn’t taken the opportunity of the financial crisis to actually articulate an alternative policy.

Matt: It’s easy to have a go at the media, but in effect what the news media do is react to whatever’s happening rather than look at the bigger picture, which is what Naomi does so successfully in the book, and it’s what appealed to me about this project. The one great thing about the news is that you can have an immediate connection with people.

The problem with a movie like The Road to Guantanamo, or this one, is that you’re often preaching to the converted. There’s a danger of that. I don’t know what the audience is like here, or why they’re here, but what’s so great about Sundance for us this year is being able to connect through Video On Demand. I like that people might watch the film by mistake, and turn it on just because it seems interesting. To not just connect with people who already know the arguments or agree with them.

The other issue we had with Guantanamo was that people said, “We already know this.” But actually seeing it in the visual form, it’s a different experience. It’s one thing to read about torture, but actually seeing it is shocking in a way the written word can’t possibly be. Even though you lose a lot of the detail and nuance of the book, it does help to see this stuff in the documentary form.

Robert: One thing’s for sure. The story that needs to be told is not being told, and not being told effectively. Where are people going to get information? On the extreme right you’re getting a big loud barking dog story that may be the wrong story. So where is the right story? Film has the ability to enhance the story. It’s the power of the visual to enhance the word. That’s obviously something I’m committed to. There’s always another story—a story beneath the story. Naomi called it an alternative history. This Festival demonstrates the ability to get at those stories that are the real stories.