Second Life Gets a First Look: An Interview with Filmmaker Jason Spingarn-Koff 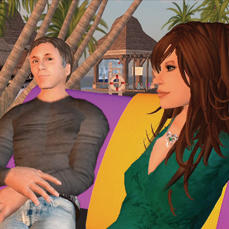 The virtual world Second Life provides an online existence for its users and a booming online industry for virtual entrepreneuers. With an avatar, you can portray a different person or a dream extension of yourself, buy and sell virtual goods with real money, and interact with other real people.

Before Life 2.0, Spingarn-Koff specialized in documentaries about science and technology. He wrote for Wired News and Rhizome and was always extremely interested in digital culture. Once Second Life hit the scene, he knew there would be a great film somewhere within.

“I was doing films for Nova on robotics and the human side of engineering and innovation,” Spingarn-Koff remembers. “[With Second Life] I thought I could go deeper into a more psychological, emotional, dramatic story than what I could do for PBS.”

Spingarn-Koff made his first avatar look completely different from himself: short and stalky, with a pink Mohawk and short shorts. As he walked around, other avatars would not talk to him, as they were only interested in sexy Ken and Barbie type avatars. Eventually he found other unusual avatars, which was a jumping-off point for discovering a multitude of subcultures within Second Life.

“The more I explored, the more I found out it was richer and more complex than I could imagine,” he says.

In order to “interview” avatars, he eventually made his avatar reflect how he looks in real life and carry a video camera, so other Second Life users would know he was filming, keeping the whole process as transparent as possible. The Electronic Frontier Foundation helped Spingarn-Koff with the legal side of filming online— a whole new territory for filmmaking. Are avatars real people? Do you need permission to film them? What about the locations?

“As a filmmaker I’m stepping through this virtual curtain,” Spingarn-Koff says. “But I’m the same person using the same filmmaking process between these two worlds.”

It took Spingarn-Koff about six months to find the subjects and another two and a half years to complete the film. Many people had incredible stories but wouldn’t talk to him in real life. As time went on, by constantly filming in Second Life and going to real life conferences, people started to find him to share their stories.

Asri Falcone is an African-American woman who is a fashion designer in Second Life. She makes real money from selling virtual clothes to avatars. Charismatic and outgoing, Falcone approached Spingarn-Koff to be involved in his doc, wanting to promote her online fashion line. She was also involved in a real life court battle over virtual merchandise stolen from her, needing the online business to help take care of her elderly parents.

Stephen and Amie’s life-imitating avatars share a virtual romance in spite of the fact that they are separately married in real life. When their avatars spend time together and have sex, is it a game or does it have real world consequences?

“Without fail, the world was more complex and more fascinating than I could have imagined,” Spingarn-Koff admits. “Just when I thought I found the most far out bizarre subculture, I would find something else.”

One of many major subcultures within Second Life is adults with child avatars, some of which change genders — only adults are allowed into the system so all child avatars are played by adults. Second Life not only offers school classes but adoption centers where adult avatars can adopt child avatars.

One anonymous adult is in his 20’s in real life, but lives in Second Life as an 11-year-old avatar called Ayya. When Spingarn-Koff found him, Ayya had only been online for two weeks and was in the middle of a binge, awake for days playing his avatar. Ayya was interested in Spingarn-Koff’s knowledge about the virtual world, as he was worried about his instant addiction to it. After Spingarn-Koff built his trust, Ayya agreed to be profiled in the film along with his fiancée.

Life 2.0 explores human psychology and even what it means to be human. Everything in the world was created by its users. Houses, streets, beaches, schools, even the malls were made by Second Life’s residents. “I think of second life as a social and psychological experiment,” Spingarn-Koff says. “The technology enabled a blank slate, and you can see how users’ desires and imagination plays out on the stage.”

With the online social networks Facebook and MySpace, your profile is generally who you are, even if through rose-colored glasses. With Second Life there is a large degree of anonymity and many users create entire identities, or explore sides of themselves they don’t understand.

The film leads to the larger question: What is real, the physical world or what is in our minds? As Spingarn-Koff puts it, “I think that’s probably a timeless question that a lot of philosophers have addressed, but it becomes important as you find real world consequences that happen in an immaterial space.”

By exploring the various facets of Second Life in business, law, love, and identity, Life 2.0 shows that the line between real and virtual is fuzzy to say the least. As the movie unfolds, so do intense, hidden worlds in the subjects’ daily lives even they didn’t expect.

Spingarn-Koff hopes a message from the film to audiences is to be open minded to people that are entering virtual worlds, because these experiences can affect real lives and their relationships with others. “There is a real dignity to people who, on the surface, may seem a little freakish, but once you get to know them you build up sympathy and respect for what they are doing.”