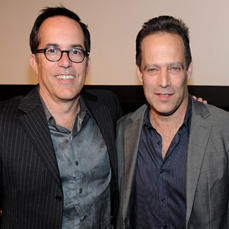 Bouquets of spring flowers, an elevated DJ booth, and the pop of lights reflected from the floor-to-ceiling windows of the party scene provided a yin-yang balance to the provocative film screening and Q&A with Sebastian Junger and Festival director John Cooper. The evening was the perfect reminder of why we love the Festival: Cinema that changes the way we view the world and a warm gathering of friends to continue the conversation afterward.

Here are some of the highlights from the dialogue between Junger and the audience after the screening of Restrepo, an amazingly visceral in-the-trenches account of U.S. soldiers fighting in Afghanistan’s infamous Korengal Valley.

Q: Please talk about Tim [Hetherington, co-director of Restrepo] and his involvement in the film since he can’t be here tonight.

Junger: We had basically never made a movie before. …We felt like we couldn’t go wrong because we had no credentials in the movies. It freed us up. We wanted to show the experience of the soldiers. Period-end-of-sentence…. Our guiding principle was to show nothing in the movie that they didn’t have access to. We would not interview their families because they could not see their families. We would not ask the general why are they are in the Korengal Valley because the men who fought would not go up to the general and say ‘why are we here, sir?’ I wouldn’t have come up with that on my own and neither would have Tim—it was our collaboration that produced this movie.

Q: Subjects of documentaries have to learn to trust. How long did it take to earn their [the soldiers’] trust? Was it a hard thing? And also, what was the government’s knowledge of this?

Junger: We were not censored in any way; we are accredited journalists. The U.S. military provides a process where journalists are embedded with military units and that’s it. They let you go and they never ask to see your footage or your film or your paragraphs or your notebooks. The U.S. military provides unbelievably unrestricted access. But journalists are usually on deadlines and they can’t do a total of 10 trips to one unit of 30 men in the Korengal Valley in Afghanistan, so the military doesn’t really have to worry about too much familiarity.

These guys just got used to us. Every time they turned around we were there: we were out on every patrol, we ate where they ate, slept where they slept. We essentially became soldiers except we didn’t carry weapons. We also got hurt. I broke through my Achilles’ tendon on a patrol and had to crawl and limp around for a couple weeks. And Tim broke his leg in combat. He had walked… on a broken leg in a combat situation at night because it was the only way for him to get out of there and had he been a baby it would have endangered the men. The guys trusted us; they stopped acting the way soldiers act around the press; they were uncensored. The result was you see their lives.

Q: Have any of the guys seen the film yet?

Junger: Yes they have. We were able to bring them [those not back in Afghanistan fighting] to New York last December for a weekend and put them up in hotels with their wives and girlfriends and showed them the movie…. They loved the movie, but it was more interesting to talk to their wives and girlfriends about it. We realized what we did was provide a keyhole for them to look through into a world they could never enter. Their men came back from this experience very affected and not necessarily for the better. It caused in many cases tremendous problems in their lives and their relationships. And the women were paying the price for something they didn’t understand and they couldn’t talk about.

They [soldiers] don’t talk about combat….This is impossible to prove, but I think the reason that soldiers don’t talk about combat… it’s not that combat isn’t interesting to talk about, it’s fascinating, but it’s that in combat you lose close friends. And it leaves you with an incredible sense of grief and guilt. Talking about combat means talking about those men who died and inevitably those guys starting crying, and it’s as simple as men don’t like to cry. The men loved the movie, it was great. But for the women it was really helpful to understand what was affecting their husbands.

Q: So you talked about how you managed their objectivity, but how did you manage yours?

Junger: In journalism the goal is to be objective. It’s a mirage. You can walk towards it and you might get closer to it, but you’re never going to reach it. And that’s if you’re covering like a city counsel meeting. There’s no way you’re going to be objective in war. For no other reason than you can’t be objective about people who are trying to kill you. I was almost killed out there. I’m not going to be objective towards people who are shooting at me. I’m sorry; I hate them. So the fraternity that developed between me and the guys was the least of my problems in terms of being objective.

There’s no way you can be objective, so maybe that’s not the ultimate goal. There’s a difference between objectivity and honesty. You can be honest about your subjectivity, and in my book I was very honest about how close I got to these guys and how much that affected me and how it made me absolutely incapable of evaluating the right of war.

Q: Did you and Tim know each other or work together at all before you began collaborating on this?

Junger: No. He was assigned to me by Vanity Fair magazine and I met him for the first time at Heathrow Airport going to Afghanistan. But he’s an amazing guy and we hit it off immediately…. He’s very visual, obviously he’s a photographer. One day there was nothing going on and it was hot with flies everywhere… it was boring and the entire platoon was asleep. Everyone was unconscious in their bunks and I thought this was the epitome of nothing going on. And Tim was creeping around the outpost taking photographs of sleeping soldiers and it occurred to me ‘Wow, you never see photographs of sleeping soldiers.’ And I thought I’ve never read a paragraph that describes a platoon that was asleep at an outpost. So that inspired me and I wrote a paragraph that appeared in my book.

Q: What was the biggest surprise for you in this whole process?

Junger: The United States military has such great technology at its disposal. They are so professional and the officers are so smart—incredibly smart—Harvard smart. It’s an incredible army and I didn’t know that. In the eighties the army was a dead-end bureaucratic job and it’s a different army now. The second thing I was really surprised by was I didn’t know that there were fighting lines. There were situations where Taliban fighters were dragging wounded Americans out of overriding positions and American soldiers were rushing towards them and dragging them back. They were literally fighting over the American soldiers. I had no idea what was going on in the mountains…it was really old fashion war and it was humbling to see that this country could even get into that.