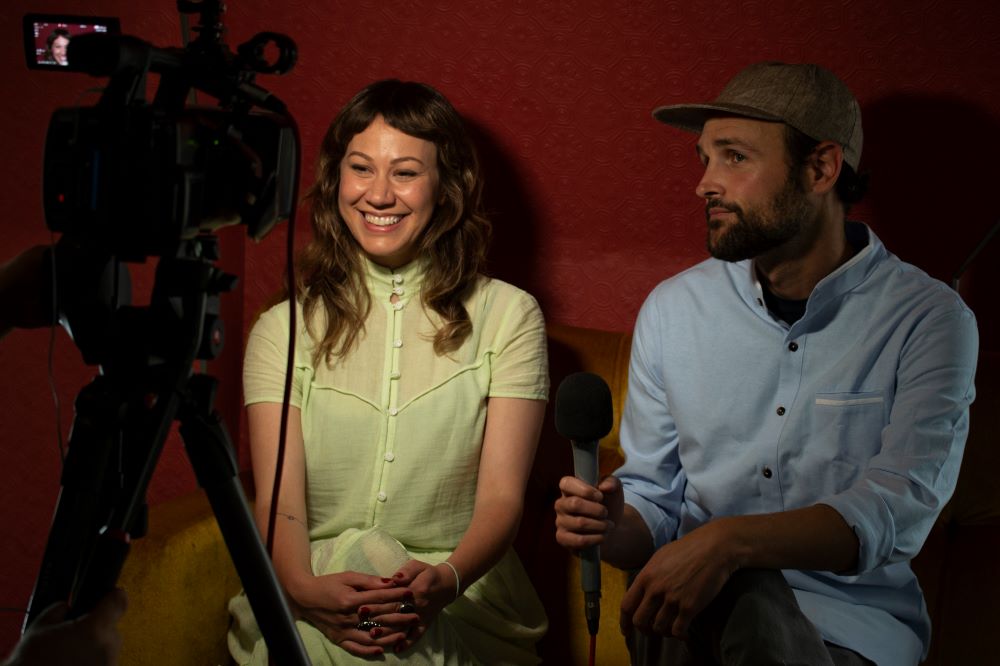 On the self-described soccer field of life, documentary filmmaker Sara Dosa says she has been bumped, jostled, and knocked to the ground. But the Sundance Institute and its Documentary Film Program (DFP) has picked her up and encouraged her to persevere.

Dosa is currently riding the red-hot wave of Fire of Love, her 2022 Sundance Film Festival documentary about Maurice and Katia Krafft, two playful and passionate French scientists who contributed volumes to present-day understanding of volcanoes. Public appearances since that premiere have been “robust,” Dosa says.

However, it hasn’t always been that way. Take, for instance, the stretch of time in the late 2010s when she was directing The Seer and the Unseen (2019), a documentary about elves, the power of belief, and an Icelandic woman’s determination to save her home. The project was going well, the creative momentum at full-speed-ahead, and she and producer Shane Boris were well into the editing process. But they were running out of money — and ramping up on despair.

Then, out of the blue, Kristin Feeley, of the Institute’s DFP, called with news that her department was awarding the project a grant. “I literally collapsed to the ground in joy and relief,” Dosa remembers. “I had tears in my eyes, and so did Shane.”

“It’s so profoundly hard to make films, like I’m getting emotional just talking about it,” Dosa confides over Zoom. “It’s so, so difficult, there’s so much rejection, there’s so much struggle. There’s so much discrimination, and we’re operating in a context of true scarcity, that really puts people against each other in this competitive way.”

She believes that the Sundance Institute creates a sense of hope, as a place that can stanch that despairing feeling to “make you feel like abundance is possible.”

The soccer analogy, by the way, comes from Dosa’s life experience: “I’m very short, and I grew up playing soccer competitively. But I was always the smallest one on the soccer field and I would always be knocked down, and it would drive my mother crazy. But, the more I got knocked down, there was more motivation to go even harder. And I feel like that’s really informed my approach to filmmaking.” Not in a competitive way, but in terms of learning to be a better player, a better teammate, and to effectively set and attain goals.

“I think that [Sundance Institute] creating that sense of possibility has been huge in my life as a filmmaker. I never thought that I could produce films until, all of a sudden, I could. I never thought I could direct films and then I could, and it’s so hard to claw my way into those roles,” says Dosa. She pauses and smiles. “‘Claw’ makes it sound more violent [than it was, but] it was really hard, it felt like really hard work!”

In addition to receiving Sundance Institute support as director of The Seer and the Unseen, Dosa has received DFP funding as producer of three other films in the mid- and late- 2010s — Audrie & Daisy (2016), Heaven Through the Backdoor (2018), and Survivors (2018).

Dosa takes pains to point out that Sundance Institute’s support is about much more than just dollars and cents, and extends to the kindness and generosity of the DFP staff, especially Feeley, its deputy director. Dosa’s film team has coined the term “little bigs” to describe actions that may seem minor to those making the gesture, but mean much more to the recipient. Feeley bestowed a “little big,” when Dosa didn’t make the cut for the Festival with The Last Season, her 2014 debut documentary about mushroom hunting. Because Feeley liked the film, she made Dosa a badge for the Festival that year and sent Dosa a photo of it — just in case Dosa could attend.

“I just think that maybe to her it was an email, but to me it was a signal that there was maybe a pathway to actually make it in this crazy industry of ours,” Dosa recalls. Then, in 2018, Feeley invited Dosa and Boris to attend a pitching forum with others in the film industry for their The Seer and the Unseen. The team did snag some support there, and the Sundance grant followed after that.

Dosa has been attending the Festival regularly since 2012, when she accompanied Josh Penn, a producer of Beasts of the Southern Wild, a film that resonated with Festival audiences and went on to make a splash at other festivals and on mainstream movie screens.

“There’s nothing like Sundance, there truly is a magic to it,” Dosa says. “And that’s something I felt from the first time I was there. Every single time I get to Sundance, I’m floored by it, actually.”