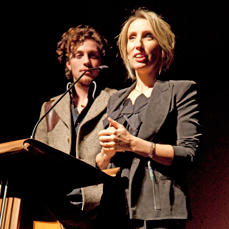 Director Sam Taylor-Wood’s Nowhere Boy intimately portrays a slice of John Lennon’s life, just before he leaps into that explosion known as The Beatles. We meet John (Aaron Johnson) as a rebellious yet sensitive teen, who bunks school authorities and bumps heads with his cultured and forcibly subdued aunt Mimi (Kristen Scott Thomas), with whom he lives.

John reunites with his mother, Julia (Ann-Marie Duff) and heartbreakingly and thrillingly enters the world of music as he wrestles with his troubled past. Shot in Liverpool and Blackpool, Nowhere Boy travels back in time, shining a light on one of the world’s greatest luminaries during his most formative period – years that have as yet been relatively undocumented until now.

Taylor-Wood and Johnson answered the audience’s questions after the film’s U.S. premiere.

Did you film in the actual places from John’s life?

Taylor-Wood: We filmed where John grew up, but sadly a lot has changed since then. We had to shoot in different streets, because a lot of the streets where they lived in then now have plastic-glazing double windows and other sorts of 20th-century additions. We filmed as much as we could in Liverpool and Blackpool, and tried to stick as closely as we could to actual places, but we also ran into pylons and things like that along the way.

Did you stick to the hard facts or take any creative liberties when filming?

Taylor-Wood: We put a lot of historical pieces together and put a hell of a lot research into it because we knew that Lennon fans would be coming to this film, and we’d be in the firing line for criticism if we weren’t too accurate. Especially with some people who come down to guitar strings and venues and how many people were there. We had a lot of researchers and came as close as we possibly could to what happened.

Aaron, how did you feel about where the movie stopped, and which scenes were most significant to you?

Johnson: It was an incredible part for me. I can’t narrow it down to just one scene. As Sam said, we covered our bases as much as we possibly could so we could be so accurate with it. And then we (actors) sort of threw the information away and kind of got on with it, so we could make it as natural as we possibly could. I mean, there are some really huge dramatic parts in it, like the confrontational scene at the end with Julia and me, and John, when everything seems to come out. … Those were some really tough days and we wanted to do it justice. They were some really strong days. At the end of the movie, it looks and felt apparent to me.

Was it hard casting this film?

Taylor-Wood: It was really difficult. It was difficult mostly because 70 people come in and look really like Lennon, McCartney, Harrison. So there are 70 look-alikes who come in and but I quickly had to decide early on not to go with the look-alikes necessarily because we weren’t making that type of film. It was an important decision that whoever was going to play these characters, that they embodied the soul and the spirit of the people. It wasn’t an impersonation.

Lennon was obviously particularly difficult to cast, because I felt like I had to have someone who could carry the weight of the icon, and at the same time learn the accent, learn how to play guitar, learn how to sing, and then take on that role without fear and tread that path. It was tough. I saw Aaron probably eighth or ninth in the realm of casting. I knew he was right immediately but then I saw another 300 just to make sure (laughter). And then it was equally hard with McCartney because I thought, “Shoot, he’s going to see the film!”

You thanked Yoko Ono in the credits. Why is that?

Taylor-Wood: When I read the script and embarked on this journey, I thought out of respect I would write a letter to both Paul and Yoko and a couple other people just explaining that my intentions were good and that I wanted to make this film as accurately and as positively as possible. And if any of them wanted to give me any information or feedback on the script, now would be the time to do it, at the beginning, not when we finished shooting it.

It was quiet for a while, and then Yoko and Paul would feed little details to me randomly and out of the blue. Yoko wrote this fantastic email to me which really sort of marked out John’s relationship with his Aunt Mimi, that he was incredibly close to her, and not to forget how much he loved her and how much she loved him. And that really stayed in my mind. The same with Paul, Sir Paul. He would sort of randomly call with brief details. And I would be in the supermarket or something, and I’d think, “My God. If everyone here could be quiet…” (laughter).

He would feed in little things and then hang up. Of course that was incredible, but the most important two things that happened were: In spite of all the danger, we needed Paul’s approval to get the rights and for Mother. I had to shoot the final scenes without the approval for that song, not knowing if we would get it. So I took a chance.

Mother was absolutely essential to me because when I finished reading that script that’s what really pummeled me to the ground and finished me off so I knew we needed that. I didn’t know we would get it. Yoko saw the film, and then she saw it again with their son and then she approved. Naturally that was the biggest blessing—and I thought that was something I really ought to thank her for.