A Chat with Russell Banks, the Screenwriter Behind ‘Affliction’ and ‘The Sweet Hereafter’ 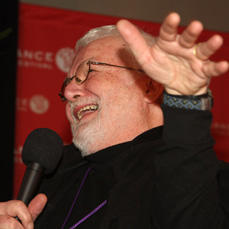 Novelist Russell Banks has been publishing books for nearly 40 years, but in terms of film he’s still something of a newcomer. In 1997, when he was well into his 50s and long suspicious of the business of movies, two of cinema’s most renowned auteurs, Paul Schrader and Atom Egoyan, involved him in the process of adapting his novels Affliction and The Sweet Hereafter, respectively. Both films were critically acclaimed, and Banks has remained active within the world of independent film ever since.

He’s written screenplays for several of his own novels, as well as an adaptation of Jack Kerouac’s On the Road for Francis Ford Coppola. In 2000 he co-founded the Lake Placid Film Forum, an annual festival and workshop located in his home region of upstate New York, and he’s served as a juror at the Deauville American and Miami International Film Festivals. This year he makes his first trip to the Festival to serve as a jurist for the U.S. Dramatic Competition.

He spoke to us about what he’ll bring to the jury, his thoughts on adaptation, and whether he’d choose a career in film, rather than fiction writing, if he were a young storyteller today.

That’s always good. The people who have different experiences in film bring the quality of their professional attention to bear. So it’s educational for someone who doesn’t share that. A cinematographer’s point of view is useful to me, and I hope that my work as a writer would be useful to a cinematographer. You can learn from each other and feed off of each other. It’s much better than if it were a room full of novelists, believe me. I’m delighted by that kind of range.

When evaluating films, do you respond more as a writer, or as a filmgoer?

I think I really bring to it not so much my experience as a novelist but my experiences working with directors and filmmakers like Paul Schrader, Atom Egoyan, and Raoul Peck — independent filmmakers whose work I admire and respect and feel very close to. It’s probably as a screenwriter and adapter that I bring anything special to the jury. I’m working now on a couple of adaptations of my own books, The Darling and Continental Drift — films in development, as they say. As a novelist, well I’m just a scribbler. It’s such a different field, and such a different enterprise.

Do you respond strongest to the storytelling aspect of film?

For pleasure in film, I tend to require some of the same things I require from novels — character and drama. These are of crucial importance to me as a storyteller. I mean, they’re important to me as a human being. If there are no characters that I can register emotionally with, and no drama, then I’m probably less likely to be interested in or intrigued by the film.

Have you seen anything recently that you particularly liked?

One I saw just the other night and it’s still on my mind—the adaptation of Cormac McCarthy’s The Road. A lot of my friends said, “It’s so depressing, you’re going to hate this thing.” But in fact I like depressing, and it turns out I really liked the film. There’s not much story to it, but there’s incredible drama and wonderful characters. Another one I recently liked from this year was An Education. I think it’s a beautiful, smart film. Another case where character and drama were really dominant.

Do you find yourself especially drawn to adaptations?

Not as such, no. But I’m fascinated by the process, and by the history of it — of the evolution of film out of 19th century novels and storytelling. The difficulties of it I’m very impressed by, and as someone who’s tried to do it myself I realize how incredibly difficult it is to adapt a novel to film. The process of adaptation is so radically different from the process of writing a novel. With the novel you’re on your own, by yourself, and you’re in control of everything. And in a sense the reader is too. Yet film is so collaborative, and its relationship to audience is so different. You’re experiencing it in an entirely fixed flow of time. You aren’t in control the way you’re in control when you read a novel.

You can think of a novelist as a potter taking a lump of clay, sitting alone making a three-dimensional object, and being entirely in control of it. Then if you want to adapt it to film you have to take that jar and smash it into pieces. And then pick up only some of the pieces and leave the rest on the floor. Then try to fit them together into a two-dimensional object like a stained-glass window. You’re working with other people. There’s going to be some guy who does the fitting, another who does the design, and another who does the tinting of the glass — it’s a guild operation. Different in every regard, really.

Do you enjoy balancing your life in literature with your more recent forays in film?

I didn’t set out to do that. In fact I kind of avoided it during my earlier years, and only backed into it with the making of Affliction with Schrader and The Sweet Hereafter with Egoyan. Those two guys brought me into the process so closely that I became really engaged by it and learned a lot, and I was able to work with people I admired. By that time I was in my late 50s and early 60s, and was drawn to a process that I hadn’t imagined ever getting involved with. On reflection it’s probably because I have a rather divided nature. There’s a side of me that thrives on solitude and total control, and then there’s a side of me that likes working with other people. I stopped teaching around that same period in my life, and I think I simply replaced that energy by getting involved in filmmaking.

You’ve said that when you first started out you wanted to be a painter, and that you came to writing somewhat organically. If it had been another time or place, could you have found your way to filmmaking instead?

I think I became a writer because I fell in love with literature — or with story, and the possibility of telling stories through literature. But if I were 20 or 22 today, it would be very difficult for me not to become involved in filmmaking. Partly because the technology of filmmaking has made it possible for a young kid to imagine himself being a filmmaker without a great deal of expense or dependency on a studio.

If I was just starting out, I could see myself sliding into filmmaking rather quickly, and maybe more easily than into writing novels. Also it’s a different mentality today, among the young. They’re more visually oriented, more media oriented, much more sophisticated in that way. What’s different too is that when I was young the cultural arbiters and heroes, the individuals who were mythologized in the culture, were novelists.

Faulkner and Hemingway were still alive when I was starting out, and the idea of the great American novel was still a very current one. But I don’t think that particular mythology still operates today. Now a talented young wannabe storyteller doesn’t necessarily want to be the next Faulkner or Norman Mailer, and certainly not the next Russell Banks. They want to be the next Quentin Tarantino.