ReFrame Report Ranks Studios on Gender-Balanced Hiring, Finds Nearly Half of Episodes Written by Women but Continued Underrepresentation of Women of Color in Key Roles

ReFrame and IMDbPro Renew Collaboration Through 2025; ReFrame to Continue Using IMDbPro Data to Determine Gender-Balanced Hiring in Films and Series

Los Angeles, CA — ReFrame™, an initiative of the Sundance Institute and Women in Film Los Angeles (WIF), and IMDbPro today announced that 47% of the 200 most popular scripted series of the 2021-2022 season earned the ReFrame Stamp for gender-balanced hiring, representing a 7% decrease from the previous year and a more than 100% increase since the ReFrame Stamp launched in 2018. ReFrame and IMDbPro also announced today they have extended their collaboration and ReFrame will continue using IMDbPro data to determine gender-balanced hiring in film and TV through 2025.

The ReFrame TV Stamp is awarded to scripted television and episodic productions that hire women or individuals of other underrepresented gender identities/expressions (including those who are non-binary or gender non-conforming) in at least four out of eight key roles including writer, director, producer, lead, co-leads, and department heads. Additional points are awarded to productions that hire women of color in key positions, and to those with overall gender parity in their crews.

Key findings of the report, determined by ReFrame’s extensive analysis of data provided by IMDbPro, include:

For the first time, ReFrame is issuing a company report card, indicating where studios, streamers and networks have met the ReFrame Stamp standard. Apple had the highest percentage of its content earn the Stamp – 75% of its eligible series met gender-balanced hiring criteria – and the majority of the major studios saw at least 40% of their content earn the Stamp. ReFrame’s initiatives aim to provide companies with a practical framework for building a more inclusive industry. 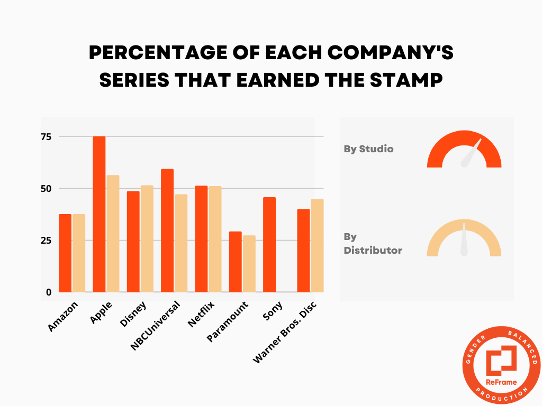 “The Stamp is a mechanism to show us where the work of building a more inclusive industry is being done, and to celebrate the executives, producers, showrunners, creatives and department heads who are making that happen by building gender-balanced teams,” said Andria Wilson Mirza, ReFrame’s Director. “It also serves as a method for accountability. With this report, we’re sharing the studios’ current standing, and we invite them to set a goal of increasing the Stamps they earn year-over-year.”

ReFrame and IMDbPro have extended their collaboration through 2025 and ReFrame will continue using IMDbPro data to determine gender-balanced hiring in film and TV. Since the ReFrame Stamp launched in 2018, the Stamp has become the industry standard for recognizing scripted film and TV projects committed to advancing gender equity in hiring. The Stamp appears in end credits of productions across major networks, studios and streamers, with more than 800 Stamps awarded to date and a dedicated channel for ReFrame Stamped content on Delta Airlines.

“Our collaboration with ReFrame to celebrate gender-balanced films and series perfectly exemplifies the IMDbPro commitment to leveraging our authoritative data to measure and encourage progress toward a more inclusive industry,” said Matt Kumin, head of IMDbPro. “We congratulate the more than 800 productions that have earned the ReFrame Stamp over the past five years for their commitment to more equitable hiring and are excited to continue our work with ReFrame for years to come.”

To determine the 2022 TV Stamp recipients, ReFrame examined IMDbPro data on the 200 most popular narrative television and streaming shows with a minimum of three episodes released during the Emmys eligibility period of June 1, 2021 – May 31, 2022. See the full list here. Each show was considered for the list based on its top-performing four weeks during the eligibility period on the IMDbPro proprietary ranking of titles, factoring in the removal of sports, news, non-fiction and reality programs. IMDbPro rankings are based on the actual page views of the more than 200 million monthly visitors to IMDb worldwide. IMDb is the world’s most popular and authoritative source for information on movies, TV shows and celebrities, and its vast and authoritative database features hundreds of millions of searchable data items.

ReFrame encourages all scripted productions to implement equitable hiring practices and apply to earn the ReFrame Stamp year-round. Through the open application process, numerous television and streaming productions outside of the Top 200 earned the Stamp in 2021-2022, including the Amazon Original With Love, from ReFrame Ambassador Gloria Calderón Kellett, ABC’s Emmy-nominated Abbott Elementary, and season 4 of ABC’s Station 19. The list of all 2021-2022 Stamped shows is available below, on ReFrame’s website, and at IMDb.com/ReFrame.

Founded and led by Sundance Institute and Women In Film, Los Angeles (WIF), ReFrame is an initiative that employs a unique strategy: a peer-to-peer approach, in which ReFrame Ambassadors engage with senior industry decision-makers at over 50 Partner Companies to implement ReFrame systemic change programs. The initiative’s goals are to provide research, support, and a practical framework that can be used by Partner companies to mitigate bias during the creative decision-making and hiring process, celebrate successes, and measure progress toward a more gender-representative industry on all levels.

ReFrame is made possible by support from The David and Lura Lovell Foundation; The Harnisch Foundation; IMDbPro; Delta Air Lines; and the Women at Sundance Leadership Council.

Celebrating its 20th anniversary, IMDbPro is the essential resource for entertainment industry professionals. This membership-based service includes comprehensive information and tools that are designed to help entertainment industry professionals achieve success throughout all stages of their career. IMDbPro offers members the following: detailed contact and representation information; tools to manage and showcase their IMDb profile, including the ability to select their primary images and the credits they are best “known for”; exclusive STARmeter rankings that are determined by page views on IMDb; the IMDbPro app for iPhone, iPad and Android; IMDbPro Track, which empowers members to receive personalized entertainment industry news and notifications on the people and film and TV projects they want to follow; a convenient tool that generates custom digital assets to promote their work on social media and other platforms; and free access to premium and secure video and voice meetings and chat messaging via Amazon Chime. Additional IMDbPro services include Box Office Mojo, the leading online source of box-office data. IMDbPro is a division of IMDb, the #1 movie website in the world with a combined web and mobile audience of more than 200 million monthly visitors. Follow IMDbPro on Facebook, Instagram and Twitter.

IMDb is the world’s most popular and authoritative source for information on movies, TV shows and celebrities. Products and services to help fans decide what to watch and where to watch it include: the IMDb website for desktop and mobile devices; apps for iOS and Android; and X-Ray on Prime Video. IMDb also produces IMDb original video series and podcasts. For entertainment industry professionals, IMDb provides IMDbPro and Box Office Mojo. IMDb licenses information from its vast and authoritative database to third-party businesses worldwide; learn more at developer.imdb.com. IMDb is an Amazon company. For more information, visit imdb.com/press and follow @IMDb.

Founded in 1973 as Women In Film, Los Angeles, WIF advocates for and advances the careers of women working in the screen industries, to achieve parity and transform culture. We support women and people of marginalized genders in front of and behind the camera and across all levels of experience. We work to change culture through our distinguished pipeline programs; we advocate for gender parity through research, education, and media campaigns; and we build a community centered around these goals. Membership is open to all screen industry professionals, and more information can be found on our website: wif.org. Follow WIF on Twitter, Instagram, Facebook, and YouTube.

Listed in alphabetical order, below are the Stamped shows for the 2021-2022 season. To determine Stamp recipients, ReFrame examined IMDbPro data on the 200 most popular narrative television and streaming shows with a minimum of three episodes released during the Emmys eligibility period of June 1, 2021 – May 31, 2022. Each show was considered for the list based on its top-performing four weeks during the eligibility period on IMDbPro’s proprietary ranking of titles, factoring in the removal of sports, news, non-fiction, and reality programs. IMDbPro rankings are based on the actual page views of the more than 200 million monthly visitors to IMDb worldwide.

“Anatomy of a Scandal” / Netflix: Season 1

“I Know What You Did Last Summer” / Amazon: Season 1

“Only Murders in the Building” / Hulu: Season 1

“The Girl from Plainville” / Hulu: Season 1

“The Woman in the House Across the Street from the Girl in the Window” / Netflix: Season 1

“A Discovery of Witches” / AMC: Season 2