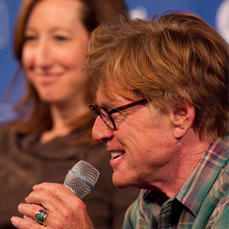 In the moments before the 2011 Sundance Film Festival officially launched with the annual Day One press conference at the Egyptian Theatre in Park City, two Festival employees stood sentry at either side of the stage, anticipating the arrival of Sundance Institute President and Founder Robert Redford, Executive Director Keri Putnam, and Festival Director John Cooper. Framed by the theatre’s neo-Egyptian proscenium and dressed in the Fest’s chic, Kenneth Cole-designed royal blue ski vests, the microphone-toting gentlemen inadvertently embodied a Festival preceded by a rich history, outfitted for the future, and eager to get on with the present.

With a record six films in this year’s U.S. Dramatic Competition developed through the Sundance Institute Labs, Redford led off the press conference calling for renewed focus on how the original mission for the Institute still defines the Festival. “We’re always asking, ‘What are we doing, why are we here, what’s the point of all of this?’” he said. “The point simply has been to do whatever we can to create opportunities for new artists.”

Redford put into context all of the ways that the Institute has grown since its founding thirty years ago, from the Labs growing into a year-round support system for filmmakers to the advent of the Sundance Channel, Sundance Theatres, and to developing ventures online and beyond. He spoke enthusiastically about the potential of new technology and of the Internet, “as long as we adapt to them and stay focused on the mission of helping filmmakers get their work out.”

Enter Cooper, who spoke of the various ways that the Festival has expanded in recent years to incorporate new ways of looking at and presenting films. “We’re committed to this sometimes almost crazy approach to new programming ideas,” he said. Last year, Cooper’s rookie season as Festival Director, saw the creation of the NEXT section highlighting low to no-budget films, and the inauguration of Sundance Film Festival U.S.A., in which Festival filmmakers traveled to 8 cities around the country (9 this year) to present their films. For 2011 Cooper further expanded the Festival’s Day One presentations to include five different premieres (representing all five dramatic, documentary, and short film competitions), and started a new Documentary Premieres section, bringing up the number and breadth of documentaries represented at the Festival, which he noted that Redford personally pushed for. “It’s so great to be in a second year, not a first year,” he said, showing the candor that has come to define a more open and approachable era for the Festival. “I’m almost relaxed.”

More than two years removed from sky-is-falling panic over the future and feasibility of independent film and festival culture in particular, Redford, Cooper, and Putnam talked optimistically about the ways in which filmmakers have evolved with changing methods of distribution, exhibition, and production, and of how the Festival and the Institute are evolving along with them.

“We’re very supportive of the acquisition market here, and are thrilled when films are acquired for distribution,” said Putnam, addressing her first Festival audience since being appointed as the Institute’s executive director last February. “But as that market gets tougher, there’s an exciting trend where films are looking to build their own audiences. The filmmakers are taking more autonomy in how to manage their own releases.”

“I think it’s changed their art a little bit,” added Cooper. “They’re staying more personal, more real to themselves, because it’s between them and the audience. Instinctually they know there’s an audience for their films. You look back at some of our more difficult films here, like Precious [2009] and Winter’s Bone, from last year. We keep getting proof that there’s a hunger for an alternative kind of entertainment.”

The big unknown is exactly how those hungering audiences will find films via alternate distribution models such as online or on-demand. “It’s technically easier to see films,” said Putnam, “but the challenge now is how to get your film, amidst all the available films, to break through and get noticed and seen. It’s really a marketing challenge.”

After thirty years of shepherding independent films to a greater public, Redford sees not a worsening but rather continuity in the challenges confronting filmmakers. “Independent film has always been a tough road,” he said. “I don’t think it’s ever not been tough.” He recounted that from Sundance’s very beginnings, he learned it was crucial to recognize the difficulties of doing things differently. “Nobody votes for a new idea,” he added. “It’s something you have to grind out yourself. You have to take it to the point of traction, where somebody sees what you’ve done, believes in it, and then might get lucky and get some support.”

With another Festival upon us, there are 199 more films that have grinded their way to life, and to the constantly evolving platform of Sundance. “Some films are not going to be liked at all, and some films will be very much liked. That’s okay,” said Redford. “The point is to show what’s out there. And create opportunities for the filmmakers, and for audiences to find that work. Wherever it goes is really some other people’s business.”