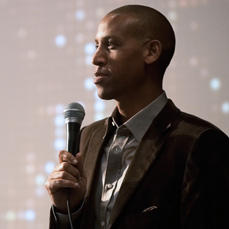 If it’s true that the most prolific trash talkers in sports are the ones who consistently back it up with stellar play, former NBA superstar Reggie Miller might just be the best trash talker ever.

With a relentlessly disconcerting gift for on-court chatter coupled with a deadly jump shot that plagued the New York Knicks and its fans (most notably Brooklyn’s own Spike Lee, with whom Miller shared a celebrated personal rivalry) for most of the 1990s, Miller was an unsuspecting but deadly thorn in the side of a franchise destined for but never achieving championship greatness.

Award-winning director Dan Klores (Crazy Love; Ring of Fire: The Emile Griffith Story) expertly catches the sights, and most notably the sounds, of this rivalry in Winning Time: Reggie Miller vs. the New York Knicks. The film premiered Sunday; after the screening, Miller joined Klores in a Q&A, although the questions were all directed towards Miller.

What were your greatest inspirations and motivations playing basketball?

That’d be (sister) Cheryl. When you’re in the same household with the greatest women’s basketball player of all time, that’s pressure and motivation enough.

When was the last time you and Cheryl played one-on-one?

Cheryl and I stopped playing one-on-one my sophomore year in high school. Cheryl was always bigger and taller. I’m 6’7” now but I was only 5’9” when I entered high school. By the time I was a sophomore I was about 6’2” so I was pretty even in height and my physical skills finally caught up to hers.

I was a Knicks season ticket holder in New York back in that time, and I always wondered as a fan shouting during the games which motivated you more—the “Reggie sucks” chant or the “Cheryl” chant?

What’s it like to watch your younger self do that stuff?

In the middle of a playoff series, I never left the Plaza Hotel because you New Yorkers, boy, you can hold a grudge. So I never really got a feel or a sense of what was being said or written because I never read the papers. But Dan got all the cool footage of the things I said. I can’t believe some of the things I said! But in the heat of the moment, things happen. But Dan did a fabulous job of going back into the archives and pulling out some great footage.

As you cover basketball today do you miss the physical play of the ’90s?

Yes. But more so what I miss is the great rivalries, the team rivalries. The Lakers and the Celtics, you had Magic (Johnson) versus Larry (Bird), it was those two teams, those two cities where fans could really jump on the bandwagon. Today you have great individual rivalries, Kobe (Bryant) and LeBron (James), but their teams really haven’t got to that level yet.

Can you talk a little more about your relationship with (Knick guard) John Starks? Were you friends off the court?

No. And after this film we probably still won’t be friends. But I have so much respect for John because there are only so many players that I played with in my 18 years that played with that much intensity. He played so hard. And I respect players that play that hard and passionate. Those are the kind of guys you wish you had on your team.