Q&A: Welcome to the Rileys 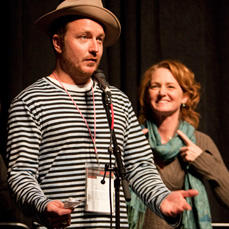 “Every film in this Festival has to have been a nightmare to get made, and this is no exception,” director Jake Scott said on Saturday after the premiere of his second feature, Welcome to the Rileys. “Though I think ours may have been a bit easier than everybody else’s now that I’ve talked to some people.” Son of Ridley, nephew of Tony, Jake Scott leveraged his familiar capital (dad and uncle serve as executive producers) to make a film of surprising and impressive restraint. Welcome to the Rileys is a quiet, closely observed adult drama about grief and renewal, and features three commanding lead performances. Still reeling years after their daughter’s death, Lois and Doug Riley (Melissa Leo and James Gandolfini) cope in very different ways. While Lois refuses to venture outside of their suburban Indiana home, Doug takes on a mistress. But after suffering another loss, Doug goes on a business trip to New Orleans and doesn’t return. When he meets Mallory (Kristen Stewart), an underage stripper in a seedy Bourbon Street club, he impulsively decides to move in with her and become her guardian and protector. Action leads to reaction, sending Lois out of the house and down to New Orleans to confront Doug and stumble into a tentative, ad hoc triangle that forces all sides to reckon with the past and engage with the messy present. Scott, screenwriter Ken Hixon, and actors Kristen Stewart and Melissa Leo answered the audience’s questions after the film’s premiere.

Q: What was the inspiration for the story?

Hixon: In 2002, a buddy of mine got married in New Orleans and we all went down there. One night some of us were on Bourbon Street and we walked into a really seedy old-school strip joint called Big Daddies, which later closed the same week we started shooting. Now they had the main stage with the big 44DD’s working, but on a little satellite stage was a girl who looked like she could have been 15 or 16. I felt like I wanted to take my coat off and wrap it around her. She probably would have punched me out if I had. But I was haunted by her. Then it took a couple of years to figure out the rest of the story.

Q: Melissa and Kristen, what compelled you to take these roles?

Stewart: I thought she was really funny. And then I talked to Jake and the way he talked about her was so – it’s not that I didn’t get that she’s obviously not in a good position, but hearing him talk about her I knew there was a lot more to understand. I didn’t get it yet, and he helped me do that. I saw a girl that was just before the point where she’s going to be totally dead inside. A lot of people like that, who’ve done the stuff she’s done for a really long time, are totally gone and don’t have the capacity to have people in their life, to have relationships that might mean something. So I thought it was cool that she was before that time. That she could still come back.

Leo: I probably took the role of Lois because Jake asked. I didn’t know what an incredibly wonderful, fun and amazing journey I was going to go on with him. I do know one of the things that endeared me to him greatly … I still had my long red hair when he called, and the very first thing he said on the phone was, “Oh, and about your hair.” I knew he wanted me to change it, and I was game for that.

Q: Kristen, when you play a character like this, how does it impact you, and does it carry over into your real life?

Stewart: I’ve never experienced anything like that, nobody’s taken anything from me, I’ve always had all of my choices and options. But I still know what it would have felt like to lack something, to always be protecting something that feels like it’s open. I also sort of feel like it’s not yours to protect. But I liked her.

Leo: One of the things a therapist told me in college was that it’s very good for an actor to work things out in a role. So things that Kristen would never imagine herself doing, stepping into them and getting a chance to explore something in a very safe way, is what an actor gets to do with something like that.

Q: Jake, how did you get these performances out of the actors, what’s your method?

Scott: There’s a woman who’s like a sorceress, and she’s Joan Sheckel. Joan is kind of like my teacher. I didn’t know if I could really direct an actor when I took this on, and Joan guided me. But I got three amazing actors and an amazing cast. I learned from those actors, and what they did emotively was so very deep. So I don’t really know what I did except that I cast it correctly. They’re the best actors for these parts.