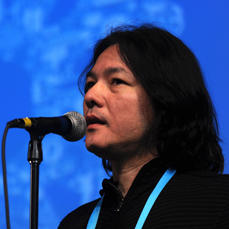 While the film’s title will no doubt cause many a pulse to quicken in anticipation of another sensual bloodbath by gorgeous, misunderstood creatures of the night, Vampire is a film that skillfully transcends current sensationalism and the growing public obsession with vampires. At times the film even takes a sideways, humorous look at a cultural phenomenon that is more often laughable than significant, but Vampire is by no means a retelling of the same old story.

Set somewhere in the Pacific Northwest, the story focuses immediately on Simon, a nondescript and seemingly ordinary high school teacher who has a penchant for not only drinking human blood, but also aiding in the suicide of willing young women and then taking their essence home in jars. Surrounding him in his world are an invalid mother, a murderous wannabe poseur, a meddling “girlfriend,” and the hope in a newfound relationship that just might give him more than he ever thought possible.

Famed director Iwai Shunji (New York, I Love You) beautifully frames this story that is much more than a man’s search for his next meal. It is one of depression, desire, solitude, suicide, and compassion––all captured fluidly and expertly. After the screening, Shunji joined actors Amanda Plummer, Kristen Kreuk, Adelaide Clemens, Kyle Cameron, Rachel Leigh Cook, and Trevor Morgan to answer the audience’s questions.

What inspired the story?

Iwai Shunji: I got the idea about a serial killer who was more like a friend to his victims and wrote the script from there.

Trevor, with all the freaky things you guys did, how much was scripted and how much did the director let you do on your own?

Trevor Morgan: Are you asking me if I raped a girl on improv (laughter)? As sick as that was, that was all Shunji.

Could the actors discuss their working relationship with this director as opposed to your past experiences?

Amanda Plummer: I’ve wanted to work with Shunji for seven to eight years even before I met him. So this has been an amazing dream for me.

Adelaide Clemens: Shunji has a very poetic way of directing which worked very well for me.

Kristin Kreuk: He gave us a very beautiful energy to be around and gives you little tidbits that made it beautiful and fun.

Kyle Cameron: This was actually my first film, so I don’t have any other experiences to draw upon, but I know that when we started doing scenes, there would be a fair amount of improvisation. And I hate improv! So I was really terrified when we would cut loose like that when I expected something more rigorous. But when I would see the scenes, they were really lovely and really liberating and peaceful.

Rachel Leigh Cook: We showed up and the level of trust was already way up here. And it was to a point where I was worried he would let me get away with just about anything. And that made me even more scared. But then I learned to relax.

Morgan: It was very free and liberating. While other directors will tell you to “go over there” and “this is the reason why you should be doing this,” Shunji gave us a tremendous amount of trust and gave people the freedom to create their own character and interact in the world he was helping to facilitate.