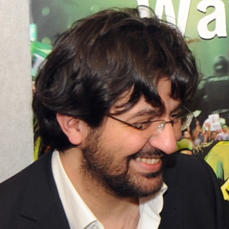 The summer of 2009 was supposed to usher in a new age of noticeable and lasting democracy in Iran. A groundswell of optimism for real societal change was roaring through the country in anticipation of new presidential elections, and many thought the overthrow of the economically and politically disastrous administration of Mahmoud Ahmadinejad was imminent. This “green wave” of reform grew to become a formidable force, taking to the streets en masse with a thunderous and self-assured voice for real and lasting change and a new beginning for Iran. However, alleged election tampering and voter intimidation secured another term of power for Ahmadinejad, prompting a backlash of bloody violence and unprecedented levels of horrific human-rights violations, which are ongoing even today.

In The Green Wave, filmmaker Ali Samadi Ahadi tells the insider’s story of this remarkable chapter of Iranian history. With an expert mix of striking animation and live-action footage, Ahadi recounts the story through the haunting texts and tweets of daring Iranian bloggers who risked their lives to show the world what the face of spiteful oppression and tyranny really looks like. The film premiered at the Festival Friday evening. After the screening, Ahadi took part in a Q&A.

Q: Are your bloggers continuing to bring you reports from Iran?

Ahadi: We try our best. We have an organization in Germany called Transparency for Iran, which is trying to bring out information about what’s going on there.

Q: Why did you decide to use animation in the film?

Ahadi: The problem with making this film was, we were not able to go to the country and film images because the government was putting nearly everyone with a camera in their hand into prison. People disappeared just because they wanted to make images. Also, the issues we were talking about had already taken place. The materials we had to work with were just like broken puzzle pieces. When we started to put these puzzle pieces together, we had so many gaps in the picture that we had to find another way to complete the story. And because Iran is a blogger nation, and a young one, as 70 percent of Iranians are under the age of 30, we decided to use their blogs because they are talking about everything in their life––their emotions and their feelings about all layers of Iranian society. We thought it would be a good idea to use them. But because they were just texts, we had to find a way to visualize them.

Q: How is the opposition faring in Iran and what are the chances to overthrow the government of Ahmadinejad?

Ahadi: I think the reason people went to vote in that election and why they went to the street to demonstrate was very clear. Freedom of speech, human rights, freedom of the press, high inflation, unemployment––these were all reasons why people thought there should be change. If you ask yourself after one and a half years after this election if anything has changed in Iran, the answer is very clear––nothing has changed, except that it became worse. Inflation is higher and fundamental human rights are nearly lost in Iran. Iran has the highest number of imprisoned journalists in the world. I just read that in the last 25 days, they killed 50 people with the death sentence. But I don’t think they can continue to control a country like Iran for a long period in that way. I think the day will come when they have to listen to the will of the people.