Q&A: The Greatest Movie Ever Sold 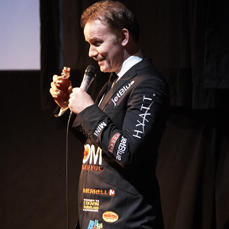 Morgan Spurlock’s The Greatest Movie Ever Sold is a documentary about brand collateral, product placement in movies, and co-promotion and it’s really funny. Using himself and his attempts to get $1.5 million in funds from corporations who would like their products advertised in a documentary about product advertising in movies, Spurlock is his usual charming, funny, and insightful self as he becomes the ringleader of a circus of visits and negotiations with companies (Ban deodorant, Jet Blue, POM Wonderful, the island of Aruba) that eventually come around to his idea, even though they were aware that they will not get final approval of the film and are subject to Spurlock’s desire for transparency. Ostensibly about product placement, The Greatest Movie Ever Sold delves into the tension between art and commerce in Hollywood filmmaking, what it means to sell out, and the relentless bombardments of ads each of us encounter daily. Festival veteran Spurlock (Super Size Me, Where in the World Is Osama bin Laden?) answered the audience’s questions after the film’s premiere on Saturday at the Library Center Theatre with perhaps the largest Q&A contingent ever witnessed at a Festival screening – in addition to the film’s crew, Spurlock asked the representatives of the various companies who sponsored the film to join him on stage to answer the audience’s questions.

Q: Were there any products you didn’t want involved in the film?

Morgan Spurlock: We tried to get money from everybody. Jeremy and I got the idea for this film almost two years exactly to the day because we were talking about the TV show Heroes, and there’s this fantastic scene where Hayden Panettiere’s father says, “I’ve got a surprise for you, honey.” And he holds out the car keys and she says, “The Nissan Rogue? I got the Nissan Rogue? Oh my god, you’re giving me the Nissan Rogue?” And this went on two or three more times in the show and I thought, “Wow! That’s really where we are today, isn’t it?” We said, “Why don’t we make a film that examines this phenomenon and get the companies to pay for it?” So first off we called the ad companies and they wanted nothing to do with us at all. And then we started talking to the product placement companies, which also didn’t want to talk to us at all. And I said, “You know what? Let’s take our destiny into our own hands – let’s start calling the brands on our own.” I think we called 500 to 600 companies and ultimately ended up with the 15 that are in the movie.

Q: How did you manage to keep the approval of the final cut of the film?

Spurlock: As we were talking to all the brands about how we would present them in the movie, we would say, “We’re going to have final approval of the film,” but we talked about how they would be represented in the film. The best thing I can say about all the companies that came on board this movie is that these are people who thought this was smart, who thought this was a way to be part of the conversation that I think it’s important for us to have. That’s one of the things that we talk about in the film, when we’re at the school district in Florida – is that school is sacred. One of the things I think this film talks about is the reality that nothing is sacred anymore. Literally everywhere we go, we’re being advertised and marketed to. And I applaud [the sponsoring companies] for wanting to be part of that conversation.

Q: Could this be the greatest question ever asked?

Spurlock: I think this is the greatest question that was ever asked.