Festival Q&A: Director Nicolas Entel on Pablo Escobar and ‘Sins of My Father’ 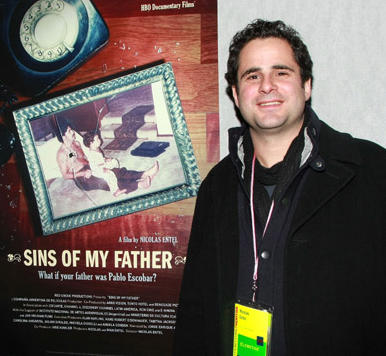 Juan Escobar was born into a life of privilege. His charmed childhood was shattered in 1993, when his father, the notoriously brutal Colombian drug lord, Pablo Escobar, was gunned down in Medellín. Juan Escobar changed his name to Sebastián Marroquín and moved with his mother and sister to Buenos Aires, Argentina, to escape the stigma of his father’s name and reputation, and has struggled to come to terms with his family’s circumstances ever since. Sins of My Father, a documentary by Nicolas Entel that’s screening in the World Cinema Documentary Competition, explores Marroquín’s feelings of remorse over his father’s crimes as he seeks to reconcile with his father’s victims. After the film’s Friday night Festival premiere, Entel answered the audience’s questions.

You mentioned that Pablo Escobar had a daughter. Why did she never appear in the movie?

When Pablo Escobar’s son agreed to be a part of this project, he gave me two conditions, and I agreed to both of them. The first was not to include “Pablo Escobar” in the title. And the second was that, because [Escobar’s] daughter did not want to be part of this project, we wouldn’t show her. Both of these requests were totally acceptable to me, so we didn’t show her. Off screen, we have a very cordial relationship, but that’s why she’s not in the movie.

Has [the son’s] life changed now that they know who he is?

We’re opening in theatres in Argentina some time in March, so they know who he is, but the movie’s not really out. Has his life changed? Of course it’s changed. We’ll really know how in the upcoming months, because now he doesn’t have to tell only half of his story and people will be able to know who he really is.

How has the political environment in Colombia evolved since the time of Pablo Escobar?

At some point while making the movie, I felt very optimistic about Colombia. But I think that cycles of optimism or pessimism in politics can be very short. Just as last year we were optimistic with Obama and now we’re pessimistic again. And right now I feel the same thing is happening in Colombia. Uribe was reelected and most people were feeling optimistic, but now there is just a weird political environment in Colombia and that makes people feel pessimistic. Cocaine in Colombia continues to fuel a lot of violence. Cocaine money continues to corrupt almost everything in Colombia’s life, from politics to business to sports. And I don’t think anyone knows what’s going to happen. In terms of fighting the non-political players in drug-trafficking, basically what happens is that every time a drug cartel is destroyed, a new drug cartel takes its place.

What happened with Escobar’s fortune?

Escobar spent only a small part of his life as a drug dealer. After he killed [Colombian Minister of Justice Rodrigo Lara Bonilla], he was no longer a drug dealer, and he was no longer controlling the routes anymore. He was more of a conventional mobster, and he was charging other mobsters for protection. So someone else was actually keeping the biggest share of the business. Also, he spent 10 years fighting his own government, his own state. That’s very expensive. He was fighting the Delta Force, he was fighting the DEA, he was fighting the Colombian army. He spent a lot of money in that way. Basically, by the time Escobar was killed, the family could only keep the money that they could prove belonged to his wife. The U.S. seized a big chunk.