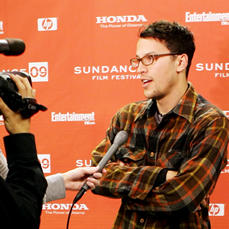 Sin Nombre, which was supported by the Sundance Institute Labs, is the story of two Central American immigrants, Sayra (Paulina Gaitan) and Casper (Edgar Flores), whose journey from Honduras, through Mexico, and into America is the same one an estimated 70,000 Central Americans take every year in an attempt to leave behind the numbing poverty of their lives.

They perch uneasily on top of Mexican freight trains, and it’s far from a safe passage. Casper is an increasingly reluctant henchman in the vicious La Mara Salvatrucha gang that mines the trains for immigrants’ money, and sometimes their lives. The appearance of Sayra, traveling with her family, offers Casper an opportunity to irrevocably alter his life for the better, though she also needs his protection, a prospect he doesn’t exactly relish even though he begins to love her.

At the film’s world premiere, after two standing ovations and with the movie’s cast and crew onstage, Fukunaga answered the audience’s questions.

What does the title mean?

“Sin nombre” means “without a name,” or “nameless.” And that in all honesty came because there was a scene with one of those crosses on the border that said “sin nombre,” and it has to do with people who died on the border and they don’t know who they are, like a John Doe. That’s in a different geographical region from where this story takes place, so I just stole that. But I also thought that thematically it had a lot to do with immigrants and the gang members not really having an identity besides what their group is.

If you got any technical support, was it from La Mara Salvatrucha?

It took about a year and a half to get at least one group of La Mara Salvatrucha that I interviewed most often to give me contacts outside of prison. I didn’t get the “seal of approval” necessarily—I sent that in and I’m still waiting for a reply—but I tried to make it as authentic as possible. My one concern is to misrepresent anything. They told me that as long as I wasn’t lying, I’d be okay probably.

Could you talk about riding the trains for research?

I just felt like I needed to see the journey for myself in order to tell it authentically. I went down with a couple of friends… the whole idea was to ride the train after I researched the shelters and the prisons. After doing research hearing how terrible the trains were, my friends didn’t want to get on that train anymore, understandably.

But I still wanted to do it and felt like I had to do it, which in hindsight probably wasn’t the smartest decision because that first train … to the Oaxacan border takes about 30 hours and we got on in the middle of the night and within three hours, in the middle of nowhere, there was a bandit attack and a guy got shot and thrown off the train.

So it was a pretty intense experience that I didn’t tell my parents about, obviously. But I think it was on that train ride that I really decided that I could tell this story, because before that, I felt like it wasn’t my experience, so how can I tell this?