Festival Q&A: Nicole Holofcener and Her Cast Dish on Making ‘Please Give’ 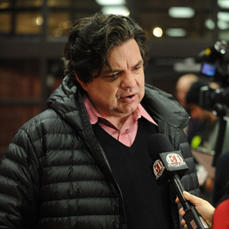 Director and screenwriter Nicole Holofcener reveals the subtleties of relationships in Please Give—a story of love, guilt, and humanity.

When Kate (Catherine Keener) and Alex (Oliver Platt), a Manhattan married couple with an estate-sale furniture store buy their neighbor’s apartment, they need to wait for the occupant, Andra (Ann Guilbert), to actually die before they can tear down the walls to expand their home.

An impromptu birthday dinner for Andra and her grown granddaughters (Amanda Peet and Rebecca Hall) plants the seeds for complicated relationships between the two families, in which all are faced with issues of their own morality and Kate and Alex confront their “liberal guilt,” which they’ve been at pains to navigate.

The entire cast (including Sarah Steele, who plays Abby, Kate, and Alex’s daughter, and Thomas Ian Nicholas, as Hall’s love interest) was on hand to discuss the film after its Festival premiere on Friday.

Where did the story come from?

Holofcener: It started from the apartment situation because I know people who did that and were waiting for the tenant to die. It’s pretty common in New York now, and I just thought that was a really good starting point for these relationships and these people. But everything else was just what’s important in my life, and I guess that’s what was coming up as I was writing.

Did you write the script with these specific actors in mind?

Holofcener: I offered parts to so many people… (joking). Some I had in mind and wasn’t sure if they would do it. But I wanted to work with all of these people [the film’s cast]. I saw Sarah in Spanglish—she was one of the last ones cast, and I thought, “Oh my God, where has she been?” It was a combination of things.

Catherine, you have a knack for working with great scripts like this. How do you choose them?

Keener: Mostly it’s because the director will ask to talk about it, or sometimes I’ll go after it if it’s by someone I really respect. It’s usually about the director first, then the script, the people, and a part.

The relationship between Kate and Abby was so touching, especially with how they handled Abby’s skin. What inspired that?

Holofcener: It’s hard to say exactly. I had really bad skin as a teenager, and that kind of thing is what makes you who you are. Those zits are so horrible, and I wanted to write about that. I wasn’t planning on it—I just suddenly gave the girl zits and it took off. I guess the idea is that it’s so small, and yet it’s the world to you when it’s happening. Just like all of our little problems are the world to us but when compared to so many things are so small.

What drives all of you to make independent films like this?

Steele: I’m really drawn to certain scripts, and it’s not necessarily that I’m drawn to independent films only. It’s just the script.

Hall: For me, it’s the characters and the writing. Independent films seem to have characters that have fewer edges, and they’re more complicated.

Keener: For me, it’s the people.

Thomas: As for myself, I love to work (joking). The other reason is that the characters by and large in independent films are a little more of a stretch of the imagination. This time, though, I just wanted to work with Nicole.

Peet: I’m drawn to Nicole. It’s as simple as that.