Q&A: Page One: A Year Inside the New York Times 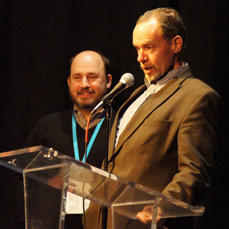 In documentaries as in life, there are few things as fascinating as a world in flux. For Page One: A Year Inside the New York Times, director Andrew Rossi followed the staff of the grey lady’s Media Desk from 2009-2010, chronicling an industry and institution in crisis through the eyes of reporters assigned to do the same. Effortlessly and entertainingly, Rossi’s film manages to tell the larger story of rampant newspaper closings and online threats to traditional journalistic models, as well as the moment-by-moment, deadline-by-deadline reality of running the most vital news organization in the world. It also features a singularly captivating main character, the raspy, stooped, walking wound of an old school reporter that is David Carr, who survived drug addiction (and several trips to the Festival as the Times’ “Carpetbagger” film industry reporter) to become an unlikely, if inexhaustible, exemplar for his profession. For the film’s premiere in Park City, Rossi was joined by Carr (who received a standing, whooping ovation), fellow Times reporter Brian Stelter, and the Atlantic’s Michael Hirschorn, whose article “End Times” helped provoke Rossi’s interest in the film.

Q: How did you gain access to shoot inside the New York Times?

Andrew Rossi: It started with David. I was developing a different project about the Web 2.0 landscape, for which I interviewed David. It was right around the time that Michael Hirschorn’s article “End Times” had come out. It was post-recession 2008, and there was a sense of total crisis in the media industry at large. The conversation David and I had kept circulating back to that. So I said a movie about you and the Times would make for a great story. He said, “Here’s the contact info for the relevant people, and go with god,” basically. So for six months I spoke with them, meeting with the Executive editor, Bill Keller, Bruce Headlam and the folks on the Media Desk. I talked about how I saw the Media Desk as a play within a play, a prism through which we can understand so many different things that are happening, in the technology world and the media world.

David Carr: Do you want me to tell them what really happened?

Carr: When he said he wanted to look over our shoulders, I was thinking, “Yeah, sure, like the Times is going to give you access.” As a way of getting him away from me, I said “Go and talk to my bosses.” I don’t know how you did it. I think what the Times saw in Andrew is what you saw as an audience. Andrew is a journalist. We have values in common. He did a great job in not only explaining himself, but in making it seem like we were going to get a fair shake. His ability just to sit there and look at you with these big cow eyes, watching you just stay put.  You saw some interesting moments, but there was so much boring crap going on. His trick was to just stay. I was a doubter of his ability to bring narrative out of it, but he and his partner are obviously brilliant storytellers who had the good luck of timing—2009 was a very interesting year in media.

Q: I work in a daily newspaper, the Charlotte Observer, where there have been eight rounds of staff cuts. What lesson should I take back to my editors?

Rossi: David, do you want to take a crack at that?

Carr: You report this story for a year, full-time, and then the hot potato comes and you hand it to me? (Audience laughter.) Community papers, small papers—the ones with the closest relationship to their audience—seem to be okay.  For some of the national papers, like ours, business is improving. It’s the papers in the middle [that are struggling]. Part of what happened at the Charlotte Observer is you have other media competing for attention. But I do think that for strong, credible brands with great relationships in their respective communities, there’s going to be a new normal. Our toes are touching bottom. When I visit these cities what surprises me is not how crappy the papers are but how good they still are.

Q: Your responsibility to the public, and what you do so well, is to deliver information that’s critical for the populace. Yet you’re beholden to advertisers, which seems like a conflict. Is that necessarily the best way, or is there a more informed way that the country needs to support?

Carr: I reject the premise of your question. I don’t see us as beholden to advertising. I’d be happy to discuss any example in which the New York Times has been influenced by who advertises with them.

Q: I don’t mean beholden in that respect. I mean your staff levels are dictated by the amount of money that comes in via revenue, which is driven by advertisers.

Carr: I can only speak to the New York Times. We have 1,100 employees, 25 international bureaus, 15 national bureaus. We deploy resources against a broad array—we are very much a general interest newspaper. The fact that we’re ad supported is something we have in common with every media in the country, save public media. For one hundred years Tiffany has been page three, upper-right corner in our newspaper. And I fail to understand how that corrupts or diminishes our mission.

Rossi: I was hoping that this film would create a conversation about that. What are the models that make investigative reporting and objective news reporting viable? There are several. One is to start having people pay online. Another, as Clay Shirky describes in the film, is something close to an NPR model. Even Bill Keller says that they’ve thought of something as extreme as having a foundation actually support the paper. It turned out that wasn’t necessary. What David is saying, and what I agree with, is that the Times is a model of an institution that’s capable of not bowing down to the pressures that you’re describing. If anything, the movie hopes that we take that lesson and think about how local and other national institutions can stay alive.

Michael Hirschorn: The interesting question to consider is not whether papers are beholden to advertisers, but whether papers operate in a kind of trust vacuum. People like Sarah Palin operate in an area where there really is no objective truth—she doesn’t really live in the truth zone. In a time when there’s an infinite amount of information available, how does an operation like the New York Times serve as a truth police? If the New York Times says something is true, does that, a priori, make it true? That’s the thing that I’m most concerned about right now.

Carr: Why would our content have more value going forward? One of the things you saw in the movie was editors going over stories, rolling the marble back and forth to figure out what’s going on. I think it’s really important that there be institutions in America where there are smart and talented women and men who can help us be better journalists.

Q: What about the iPad and the Kindle as a source for revenue?

Carr: We’re very interested in any device that allows us to extract cash from your pocket. That’s a very compelling technology for us. What’s notable about the iPad is that it takes us out of the realm of subscriptions, which as we all know is a nasty, terrible word on the web, and into applications, which is a wonderful, friendly word. As publishers, we’re very interested, regardless. We’re agnostic on what your electronic reader is. I’m of the belief that with your ability to touch and manipulate text, a romance of reading is renewed. Part of the reason publishers get so excited about the iPad is that it allows you to move and manipulate. People want to touch what they want to learn about—it’s a centuries’ old instinct.

Brian Stelter: When we heard Murdoch talk in the film about tablets saving papers, he’s not the only one that feels that way. I was glad Andrew captured on film the day of the iPad launch, because we may look back at that as a really crucial day in the future of newspapers.