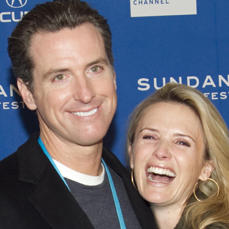 Jennifer Siebel Newsom’s empowering documentary Miss Representation explores the underrepresentation of women in media, government, and business. Blending interviews with female leaders (Gloria Steinem, Condoleezza Rice, Geena Davis, and Katie Couric to name a few) and politicians including her husband Lieutenant Governor of California Gavin Newsom, and eye-opening statistics on the role of women in American society, Siebel Newsom’s directorial debut is what she likes to label a “call-to-action” film. Weaved throughout Miss Representation is the director’s own story – dealing with discrimination as an educated, late 20-something in the acting world, a two-year struggle with an eating disorder, and the birth of her daughter Montana. After a standing ovation from the packed crowd Saturday at the Sundance Film Festival, the director and cast answered questions.

Q: What do you think is the role of the media in addressing the sexualized representation of women, and what role does the media play in perpetuating it?

Siebel Newsom: I’m really excited about OWN, the Oprah Winfrey Network, because she’s been a champion of empowering women. There’s some incredible media outlets out there and all they need to do is bring more women behind the scenes to write and direct and tell these stories. And then obviously the media is perpetuating it because of short-sighted, limited thinking, so we need to educate them and put pressure on them, especially the real thought leaders and decision makers in the media companies. I know that we can do it.

Q: You started out with an idea and passion in your own life. What surprised you in the process?

Siebel Newsom: I think this movie has taught me to stand in my own power. This movie has given me a voice, and I know some people may not be happy with the truth that was spoken, but truth is important, we all know that, and that’s how we’re going to change the world and that’s how we’re going to leave the world in a better place for future generations.

Q: In the realm of higher education, colleges are having a hard time getting enough qualified males into seats because girls are doing so much better – I’d love for you to speak to that.

Siebel Newsom: If you go to the Megaplex to watch a mainstream studio film, the protagonist is usually a male figure that, for the most part, can’t hold a job, he’s not that smart, he does drugs, he’s lazy and apathetic and it’s a comedy and it’s funny, but he’s not a role model. And I think we’re sort of embracing these male characters and glamorizing them and saying this is what it is to be a man. So I don’t think we’re giving young men very healthy role models for what it is to be a man.

Steinem: We have the most responsibility where we have the most power. So we have dollar power. We’re going to boycott and we’re going to tell them we’re boycotting the movies, the television shows, the products. We have vote power, we can vote on regulations.