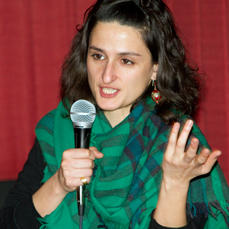 Part intimate profile of two determined women, part revealing glimpse into life in Iran, and part pulse-pounding sports film, Kick In Iran follows 20-year-old Taekwondo sensation Sara Khoshjamal-Fekri and her trainer Maryam Azarmehr as they train and fight for Olympic gold. Documentarian Fatima Geza Abdollahyan shoots these two fascinating women in their homes, in gender-segregated gyms, at prayer and play, and finally to the Olympic games in Beijing. Even though Iranian women are still discouraged from high-impact athletics, Sara’s success becomes its own agent for change. Her complex relationship with Maryam, who emerged from an even stricter generation but nevertheless expects the world from her young protégé, emerges as the heart of the film. Following the premiere of Kick In Iran, director Fatima Geza Abdollahyan responded to questions from the audience.

Q: Can you tell us about your background?

Fatima: I was born and raised in Germany. I started in politics and got a Masters in international relations, and then I went to film school and this is my graduation film.

Q: I want to know a bit more about the instructor. Where was she trained?

Fatima: Maryam Azarmehr, Sara’s trainer, is now 38 years old. When she started to do Taekwondo, she was really a pioneer. She started when she was 18, and that was just a couple of years after the revolution. Sports for women were not a given. The problem is that women in Iran were not allowed to be trained by men. Now it’s loosened up a little bit. But for Maryam her only chance to learn Taekwondo was from her husband. This applies to many other women at that time that received training from their brothers, fathers, or husband. She was never able to do what Sara did, because there were not those possibilities for women at that time.

Q: Do you have plans to show the film in Iran? And do you anticipate any censorship?

Fatima: Yes, we do, and there might be. A year ago, I think there would have been almost none. But today, we don’t know, but I think there will be some.

Q: Did you make any choices thinking about what would be permissible to show in Iran?

Fatima: Yes, you do that constantly, actually. When we were shooting, we tried to get what we could, but then in the editing room we had to think about it. But it was not my main concern. I tried to do the film in the way that I thought would be right. Then the next step was to consider whether the footage could cause any trouble for my main characters. I was not so much concerned for myself, but I was for them.

Q: There seemed to be such an innocence about Sara and the coach. Is that just them, or is it typical [of women in Iran]?

Fatima: I think they are very special, which is why I loved them so much. Sara, for me, is still an enigma. She’s very determined to do what it takes to achieve her personal goals. It’s very much about personal dreams and goals. Maryam’s case is a bit different. She’s a divorced woman, raising her little girl alone. She had to pay a higher price. But she’s very determined too, and they both try to be good at what they’re doing. There’s a real difference between the inner circle, the life back home in which they are free to develop themselves, and the outer side. They are like this [how they are in the film] when they are in their own realm.

Q: Can you talk about how much time you spent with your main subjects?

Fatima: I actually met Sara when she was 17. I was working in Iran as a journalist for German television in 2005, and I was researching about women in sports. Three years later I came back to do my graduation project, so I went back to see if Sara was still kicking – very appropriate in this case – and she was even better than before. Initially I wanted to make a film in Iran about three different women in three different disciplines. I changed my mind when I got to know Sara and her coach, and when she got the Olympic qualification. It was very clear to me that it should be one story, not three. There were two or three research trips, which involved a little bit of shooting, then four more visits for the shoot, each time lasting a few weeks. During the research period I spent a lot of time with them, even without camera. Being there for the entire day, at home, in the car, doing whatever they did, training, training, training, so that once we started filming my camera-lady and I wouldn’t be in the way.

Q: What is Sara planning? Is she going for the 2012 Olympics?

Fatima: One of the reasons they’re not here today is that they’re training and have national competitions right now. Her next goal is 2012 in London, and hopefully she’ll make it. She really is the best Taekwondo fighter in the country.

Q: Have you taken up martial arts yourself?

Fatima: No! I am not a martial arts fighter. I’m so scared. One time I wanted to hold the pillow [for receiving kicks], but I was afraid I’d get hurt and not be able to work anymore. I’m not very athletic.