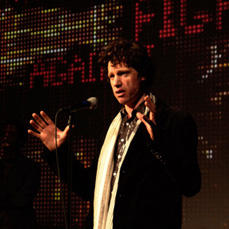 Four Lions, the hotly anticipated debut film by British satirist Chris Morris, courts controversy and laughter in equal measure. But what’s most shocking about this madcap comedy about a group of hapless wannabe suicide bombers is how warm-hearted it is.

Pitched somewhere between the Three Stooges and The Office, Four Lions follows four British-born jihadists as they bumble and scheme their way to a potentially violent, and inevitably foolish, end. Before the film’s Festival premiere on Saturday night, Morris treated the audience to an extra helping of his dry, self-deprecating wit. “If you’ve been making a film for four years, you’ve been living a fiction for most of that time,” said Morris. “You’ve got no money, you’ve pretty much lost all of your friends. You are deluded.”

To which he added: “My wife is seeing it for the first time tonight. And she just said to me, ‘Look, even if it’s shit… well done, you’ve made a film.’” Morris and cast members Riz Ahmed, Arsher Ali, Nigel Lindsay, and Kayvan Novak fielded questions from Groth and the audience after the screening.

Trevor Groth: Where did the original idea for the film come from, and what kind of research did you do in preparation?

Morris: It seems counter-instinctive to want to make a comedy about this subject. But I was reading a serious book by a man called Jason Burke called Al-Qaeda and came across this incident which happened on millennium eve, where these guys in Yemen wanted to blow up a U.S. warship which was moored just offshore. They gathered at three in the morning, put their launch into the water, filled it with explosives, and it sank. And I thought, you’ve got five Yemenis standing around, staring at each other, and what are they going to say? There were more incidents like that that had unexpected moments of humor. All of this was ludicrous, and these guys were basically pretty foolish. If you get five average blokes to try and organize something, they’re going to fuck it up. The dynamics of that kind of group, whether it’s a five-a-side football team or a stag party, it’s going to go wrong. And these kinds of operations are really no exception. Even if they get away with it they only just get away with it. If you remember, even on 9/11 the so-called twentieth hijacker went to flying school and said, “Listen, I just want to learn how to take off and fly, I don’t need to land.” And you think, this can’t be real.

Q: So I see the aim of the film, to show that these guys were foolish, but there were also scenes that were quite dark, especially towards the end. How did you decide how much to keep, to balance the darkness and the humor?

Morris: We just felt that we had to keep writing into this, and not shrink from it. Otherwise why set off on making this film about this subject? I felt that to take a left turn [in the end] would deny a great deal of what had happened before. So long as what we were doing was truthful and the jokes kept coming, it was fine [to explore that].

Q: How do you think the Muslim community will react to this?

Morris: One of the first things I found in my research is that there isn’t any such thing. The whole idea of a Muslim community fragments. You can hazard a guess about what certain people you’ve met might think. But I sort of feel like this is a good-hearted film. It’s not a hate film. I hope that aspect will come through.

Q: How much of the dialogue was scripted and how much was improvised?

Morris: Well, it was all scripted. We scripted and then, when shooting, you want to keep things fresh and real. So these guys basically all lived together in Sheffield, and developed a whole parallel universe which tried to mimic the life of a cell, so it was absolutely fantastic to be able to chuck the script into the mix, and sort of say, “Let’s shoot it loose and see what happens.”

Lindsay: We had the script, and we had Chris shouting at us during the takes.

Morris: Sorry about that.

Lindsay: We would pick up on an improvisational idea of Chris’, which I found quite exhilarating, and he let us go as far as we wanted. But it was mainly script.

Morris: These guys had huge momentum. We shot enough rushes anyway, but we could have shot double, because it was pretty hard to stop them. They were fantastic.

Lindsay: We got a proper rehearsal period, which you don’t usually get with a film. So by the time we started shooting we knew who we were. It makes a massive difference.

Q: How did you develop sympathy for the characters? Even though there was a farcical aspect, did you identify with them at all?

Morris: You have to find that somewhere. Otherwise you’re going to run out of juice.

Ahmed: I don’t think it’s a film about terrorists at all; I think it’s about five guys. It was very easy to relate to, because they’re just guys with families and friends. Like Chris was saying, it’s about a bunch of blokes and the social dynamic amongst them. Doing the research and checking out jihadi websites, you found people ranting like you would on YouTube.

Morris: There’s a book called Understanding Terror Networks by a psychologist called Marc Sageman, who’s very good on how the processes of bonding happens. Even in a terrorist cell that is plotting evil activity, it’s a group bond, a group love. It’s not hate to the outside that makes it work. That’s what’s mystifying in a way about the subject.