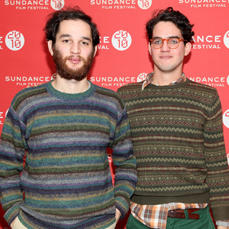 Daddy Longlegs is the funny, compassionate, and somewhat troubling Safdie brothers’ portrait of Lenny (Ronald Bronstein), who may be the most irresponsible father in recent cinematic history.

Lenny’s young sons, Sage and Frey (Sage and Frey Ranaldo), get to be with their father two weeks out of the year. Lenny is a projectionist at a Manhattan movie theater who is a loving, thoughtful father but one who’s more than a little misguided (like the time he can’t find anyone to keep his boys, so he crushes a sleeping pill and gives them part of it, thus putting them in stage four sleep for several days).

Having just emerged from the bathroom, where he said he was hiding in a stall so he could hear what people really thought about his movie, Josh Safdie approached the stage after the film’s Festival premiere on Friday with his brother Benny and some of the cast and crew from Daddy Longlegs to answer the audience’s questions.

How much of this was based on your own childhood and what inspired you to write it?

Josh: One hundred percent of it was emotionally inspired by memories that were coagulated—hard mucous membranes that are stuck in the backs of our heads.

This movie was a real investigation of how memory forms, and in an even stranger way, we really wanted to understand this programming and deprogramming that the father and mother characters go through in divorced families and obviously the kids’ experience.

We wanted to understand what it’s like to be a mess of a person with the character of Lenny, who’s very much inspired by our father. And to understand what he’s going through—develop real compassion for someone who has a real flawed logic and does some pretty ugly things at times.

Benny: And it’s kind of a sadistic thing we needed to do for ourselves. We had this thing knotted in our stomach, and we could never really verbalize it and we had to figure out a way to go back. A memory is so skewed you only remember a few frames of what actually happened, and you have to fill in the rest.

A memory is so skewed you only remember a few frames of what actually happened, and you have to fill in the rest.

Josh: It’s weird how memory works, though, because we showed it to our dad—that was a mess of a situation of its own—but one of his first questions was “Did I drug you?” He doesn’t know. It’s weird how you canonize something—you start to forget what you actually felt and what actually happened—and I think that blurred line is interesting.

Did your father give you sleeping pills?

Josh: I don’t know; we were asleep. He does have a strange collection of photos of us sleeping. It’s not perverse.

Benny: At any moment, you could be walking alongside of him, and if you’re following his path and following his logic, it makes perfect sense and it’s logical. But as soon as you step one step away, you realize that it’s a logic created in someone’s head, but that flaw is still beautiful, and sometimes you love people for those flaws. You can be critical of them, but looking back on it, it’s hard to hate somebody when you see that they’re trying, they’re really trying.

What did your mom think of the movie?

Josh: She actually saw it as a vindication. She saw it as a portrait of how irresponsible and terrible he is. But when our dad saw it, he saw that it was a loving acceptance of his personality.