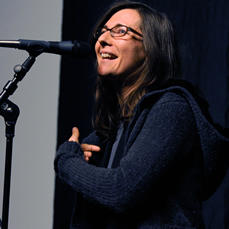 Sophie Barthes’ haunting comedy Cold Souls takes a literal cognitive journey into filmmaking. Paul Giamatti stars as himself, an actor in the midst of a Chekhovian breakdown; he suffers from an indefinable throb, a pressure, a pain. He turns to the new technology of a glossy white soul-extraction machine to escape his spiritual crisis.

It takes a few borrowed souls, some awkward play rehearsals, and a mission to Russia for the actor to find his way back to the value of his own soul. After a Festival screening, director Sophie Barthes, who developed the film at the 2007 Sundance Directors Lab, answered questions from a packed audience along with cinematographer Andrij Parekh and other producers, including Elizabeth Giamatti, Paul Giamatti’s wife.

Q: How did you get Paul Giamatti involved in this project?

A: The whole idea for the script came from a dream I had in 2005. It was this strange place—Woody Allen was there with a white box where people could store their souls. When it came to Woody Allen’s turn, he stored his soul and it came out as a chickpea. He was very upset because he had made 43 movies and how could his soul be a chickpea? Woody Allen is my filmmaking idol, so what was my soul going to look like? I got into the box and then the dream ended, so I didn’t get to see my soul.

I used my dream to write this screenplay and I wanted to write it for Woody Allen. But then on second thought I knew if I got him he would want to make the movie. And then I saw American Splendor and completely fell in love with Paul Giamatti. He has such an amazing emotional charge with an incredible range, so I wrote it for him. Then by a twist of fate, I won this competition at the Nantucket Screenwriters Colony.

I had never applied for this type of thing and then six months later they called me and told me I won. They flew me to the island to get this award and Paul Giamatti happened to be there to give an award with Alexander Payne. I told him about the dream. He might have thought I was nuts, but he loved the idea and he read the script. His wife was there too, who was a producer, and she also liked the idea. And they said yes very quickly.

Q: What portion did you shoot in Russia and what was that experience like?

A: We shot in St. Petersburg in Russia. We shot 25 percent of the movie there. We heard all the crazy stories about problems with shooting in Russia like I would have to bribe people or be caught up in corruption. We didn’t have any problems – at least not that we know of.

Q: Who came up with the look of the soul-extraction machine?

A: A friend of mine who is an artist who I met at the Sundance Screenwriters Lab. He started sketching machines when we were at the Lab together. And then he went home and made the machine in his garage with his brother. They put the machine in their truck and they crossed America with a soul-extractor. We wanted to do a cross-country documentary about this, but we didn’t have time.

Q: This is a transcendental story grounded in the real world. How did you make the creative decision to portray this soulful story as a reality?

A: That’s what really interested me about science fiction that takes place today. If I had read an article in The New Yorker about soul extraction I would check it out. The short I did two years ago [Happiness] was also a realistic interpretation of the abstract. The main character bought a box of happiness, but she didn’t know what to do with it, so tried to return the box. The audience responded very strongly because even if it’s abstract, it’s very real. The chickpea in my story is real. It’s a playful way to be philosophical about the body, mind, and spirit.

Q: When one thinks of the soul, one often thinks of a religious spirituality. Was it a conscious decision to leave religion out of this story?

A: At the beginning of the film, Paul’s character says he doesn’t believe in any religion, so I didn’t include religion. Several religious people say it and they saw spiritual things. We don’t give answers about where the soul is, where it goes, so you can see it in a religious way or not.