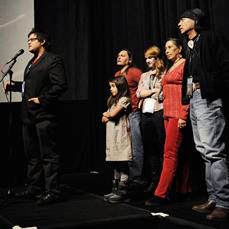 In Barking Water, the latest film from Sundance Institute Lab alum Sterlin Harjo, Irene (Casey Camp-Horinek) takes Frankie (Richard Ray Whitman) on one last road trip, driving him from the hospital across Oklahoma to see his daughter and grandchild. Along the way, they meet and spend time with friends, family, and random strangers, each encounter shedding a bit more light on the couple’s on-again, off-again relationship and the complicated nature of love and regret. After a recent screening of the film, the director and actors gathered to answer questions from the audience, offering insights into how and why the film was made.

How much did this film cost to make?

Sterlin Harjo: It cost less than Batman. And more than El Mariachi.

I was truly knocked out by the two lead performances. I thought their depth and range were just amazing. What kind of training did they have?

Harjo: The school of hard knocks. No, actually I’ve worked with them before. Casey, she usually gets “spiritual” roles, and Richard is in the background on a horse. So no one ever gets to see their talent, so I wanted to write these two roles for them, because I knew how cool they were.

What I really love about them is they treat acting like, “Oh yeah, I do that sometimes,” but Casey is also an environmentalist and activist, Richard is an activist—he was at Wounded Knee—and he’s an artist. They’re both these hardcore Oklahoma American Indian Movement members.

Casey Camp-Horinek: I don’t know about that “old” part—we’ve got relative youth talking over here [points at Harjo]. I started acting a bit in the ’80s in a spiritual piece called Black Oak Speaks. At that time, they’d brought in Hawaiians and Mexicans and Italians, and David Carradine was doing red-face … and then they’d put the Indians in the background with a teepee and a bush. Our message was being conveyed by non-Indians, with non-Indians writing it.

So it’s interesting now—as an activist, as an AIM member, as a person who was trying to bring out story to the world, like “We’re still alive! We’re in this century!”—to have a young man like Sterlin come along who has the ability to write from our experience, and understand how to direct from our experience. But I’ve been talking a long time, so I’ll let Rich add his “Uh huh.”

Richard Ray Whitman: [Nodding] I’ll just take all the animal husbandry questions. No really, I’m thankful to Sterlin for taking a chance on us, for always having us in mind.

What gave you the idea for the story?

Sterlin Harjo: I’ve always wanted to do a story with an older couple, because it’s never really done right. It’s always kind of fake. And back home, my whole culture—and I’m sure other cultures too, but I can only speak for mine—doesn’t want to die in hospitals; they want to die at home.

I thought the film was just a lovely—all the messages that were conveyed in complete silence, with no talking. I was wondering if you could comment on that?

Camp-Horinek: Actually we did a lot of dialogue. We filmed for 17 days, and Sterlin redid a lot of stuff, and took a lot of our dialogue out. And Mr. Editor David, who didn’t know us well—[in stage whisper] you should see some of the stuff he cut—but as actors, we did what we were told. We had the script; we also improvised some parts.

When we got to see it for the first time [at the Festival premiere], I was kind of surprised to see how spare it was, and how powerful the message was without the words. So, we just have a wondrous director, and a great editor. And we know how to act.