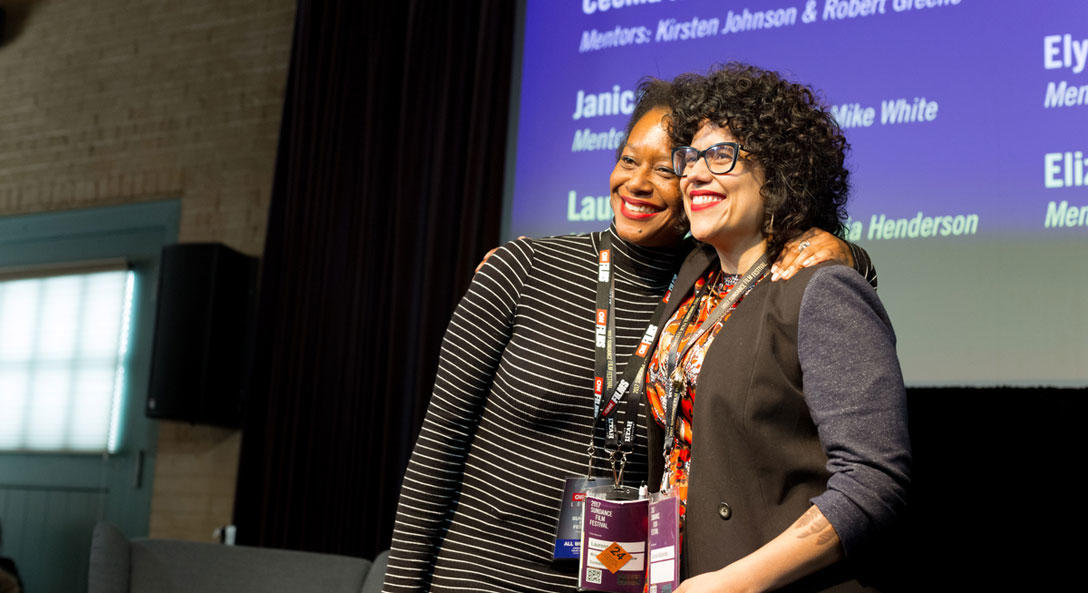 As 2017 rolls on, Women at Sundance fellows past and present continue to pursue new creative endeavors and make headlines.

Rebecca Green completed production of two films this year: And Then I Go, a feature film based on the acclaimed novel Project X by Jim Shepard, which premiered at the 2017 Los Angeles Film Festival, and 44 Pages, a portrait of Highlights magazine following the creation of the cultural phenomenon’s 70th anniversary issue, which premiered at the 2017 SXSWedu Film Program. Cecilia Aldarondo debuted her new documentary short, Picket Line, commissioned by Laura Poitras’ Field of Vision and Stanley Nelson’s Firelight Media for their series “Our 100 Days.” It will have its World Premiere at AFI Docs and was recently featured in the NY Daily News. Her new film, Homecoming, a documentary exploring Cecilia’s “tortured suburban adolescence” in Central Florida, was one of 12 projects selected to pitch at the 2016 Tribeca Film Institute Network market. Laurens Grant produced episodes for CNN’s The Nineties series, which premiered on July 9. Elyse Steinberg launched the production company, Edgeline Films, with the co-director of her award-winning documentary Weiner, Josh Kriegman and acclaimed editor Eli Despres. Elizabeth Wood is currently in development on her next feature film. Janicza Bravo premiered her first feature film, Lemon, at this year’s Sundance Film Festival, locked a distribution deal with Magnolia Pictures, and just completed a prestigious one-week writer’s residency at Space on Ryder Farm.

Marta Cunningham was nominated for an NAACP Image Award for “Outstanding Directing in a Comedy Series” for her very first episodic experience, the season three finale of TRANSPARENT. Jennifer Phang is directing episodes on three different television series this year: The Expanse, a space opera based on the James S. A. Corey novels, MARVEL’s Cloak and Dagger, and Riverdale, the teen noir adaptation of the Archie Comics. Kat Candler directed two episodes of Ava Duvernay’s Queen Sugar and will return as a producing director on season two to shepherd a new batch of amazing directors.

Based on the best-selling novel by Lauren Oliver, director Ry Russo-Young’s Before I Fall premiered at the 2017 Sundance Film Festival and received a wide theatrical release from Open Road. It is one of the highest grossing indies of 2017 thus far. Jordana Mollick recently received the Piaget Producers Award at the 2017 Spirit Awards for commercially-successful hit, Hello, My Name is Doris, and is now in pre-production on her next feature, The Good Time Girls, a feminist Western starring Laura Dern.

Gabrielle Nadig produced the 2017 Sundance Film Festival Short Film Jury Award winner, Lucia Before and After, and is currently in post-production on the Sundance Institute-supported film, Little Woods. Grace Lee recently created and launched KTOWN ‘92, an interactive documentary that explores the 1992 LA uprising through a diverse cross-section of Angelenos from Koreatown and beyond. Jessica Devaney premiered her directorial debut, the short film Love the Sinner, at the 2017 Tribeca Film Festival. The film was featured in The Advocate, and featured an all women production team. Introduced through the 2016 Women at Sundance Fellows program, Devaney and Lyric Cabral have teamed up on a new feature documentary, The Rashomon Effect, which the two just pitched at Sheffield DocFest MeetMarket. Pamela Romanowsky traveled to South Africa this year to direct Khethiwe and the Leopard, a Refinery29 Shatterbox Anthology short film sponsored by Dove Chocolate.

Jennifer Cochis recently served as Digital Studio Head for Joss Whedon and assumed the role as head of the LA Film Festival, which ran in June. Angela Tucker is in development on her narrative feature Paper Chase, and just joined the producing team of Erika Cohn’s film, Belly of the Beast. Angela also premiered her short film, Intersection, at American Black Film Festival and Frameline (on the same weekend!). Mai Iskander recently directed an interactive campaign called “Care Counts” for Whirlpool, which earned the Grand Prix Gold Lion Award at the 2017 Cannes Festival of Creativity.

At the 2017 Sundance Film Festival, Elisabeth Holm premiered Landline, the comedy she produced and wrote with Obvious Child collaborator Gillian Robespierre. Landline bowed in theatres on July 21. Sydney Freeland also hit the stage at Sundance with her second feature, Deidra and Laney Rob a Train–available on Netflix now. Adele Romanski collected an Oscar for producing the critically acclaimed masterpiece Moonlight.