​So You Want to Be a Film Composer? A Day at Sundance Institute’s Film Music Master Class 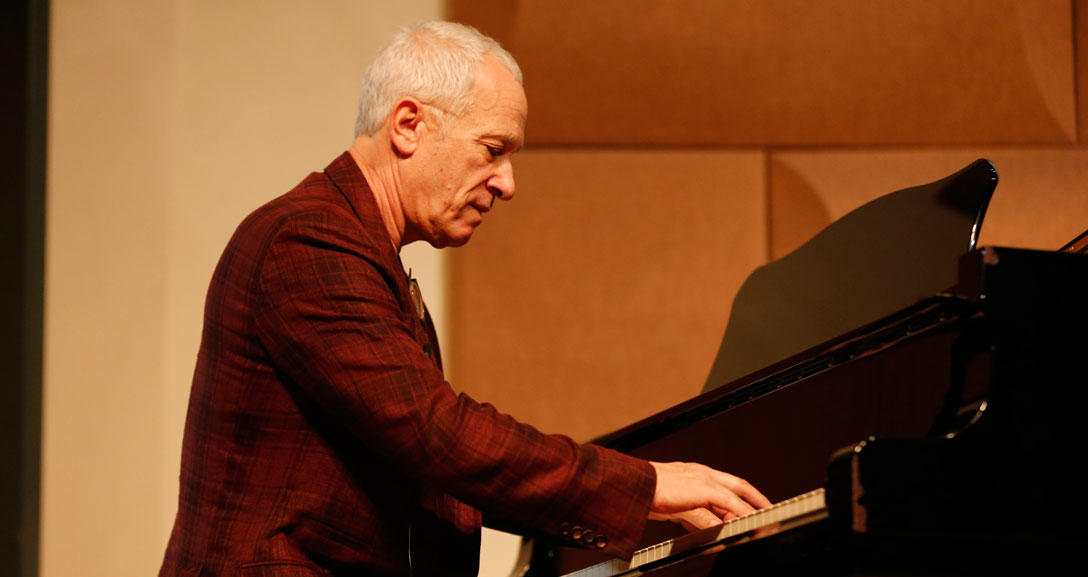 Last weekend, Sundance Instite’s Film Music Program, in collaboration with the University of Miami Frost School of Music, presented a free daylong master class for composers, filmmakers, students, and other industry professionals. The program offered access to some of the top creators working in film and television, and was hosted by composer and Film Music Program director Peter Golub. As an opener, Golub discusses Sundance Institute’s recent programs in Miami, the Knight Foundation’s support of the day’s event, and divulges some best practices for submitting your artist application to the Institute. But ultimately, he decides to “jump right into things” with the days distinguished guests.

Fresh off a phenomenal performance of his work by the Frost Symphony Orchestra at the Arsht Center the evening before, this rock star composer is one of the most thorough, clear, and honest speakers Frost has hosted in my time here. He revisits the inception of his career, working in pop music, and stumbling upon film.

He explains that film scoring “involves a degree of fear and insecurity,” imparting that the “accident” of composing his first film in 1984 was something of a leap of faith. There is fear, and that’s just fine. Howard then articulates his creative process. He receives the script, a scene, and the storyboards—whatever he’s given. He goes through it, digests it, and puts it away. Then he plays.

And out of all the playing, eventually there is something interesting to develop into a piece. It is, deliberately, an effort to not “write to picture.”

The presentation moves to examples of scenes with and without score. We begin with the final scene from Signs. In between thinking, “Wow, Joaquin Phoenix and Mel Gibson really look related,” I’m genuinely terrified. I’m caught off guard by the warmth I feel when the little boy is not killed by an alien.

Howard talks about limitation being freedom, and that he wrote the whole score based on three notes and how this gave it continuity. He then performs for us on the piano. It’s haunting and relentless. We move to Nightcrawler, in which Jake Gyllenhal is a sociopath filming ghastly crimes for nightly news programs.

It’s a new kind of creepy, in that Howard was asked to write “from the character’s perspective,” and as though “he [Gyllenhal] is your son.” So, when he moves a dead body to get a better angle for the shot, heroic electric guitar wafts into the hall.

In a similar fashion, Howard turns King Kong’s final moments from a heart-racing action thriller into an emotional and beautiful farewell between two friends, noble horns rising as the planes come to take Kong down.

If I wasn’t already at my emotional breaking point, Howard’s last clip is the death of Rue from The Hunger Games. He accompanies Katniss Everdeen while she sings to Rue passing on and drowns out the ensuing riot in District 11 with legato strings, reaching a peak that left me beyond glassy as Katniss salutes the screen.

We are left with a lot of questions and ample time is taken to respond. We are offered windows into the business of film—changing spots in the melody 64 times and that it really is 90% perspiration—and made privy to compositional techniques, including how Howard chooses instrumentation and the guidance he’s received from directors.

Still, he reveals, “I argue about a lot of things,” receiving chuckles from the audience.

After a short break, we’re back. At this point, we’re trending toward music editing. Music editors create the “temp track,” which is a term I’ve come to be afraid of and thus Sharon Smith’s job a position I’ve come to resent. The rumor is that directors get so hooked on the temp track, it’s hard to get the music you’ve composed approved for the film. I soon find out I don’t really know.

Sharon Smith is there to let me know. She does create the temp track; she works tirelessly cutting to scenes and searching through libraries to give the director an idea of the sound. She’s also there to talk between sides and tie everything together. She’s “a little shepherd… if the sheep were highly creative people who don’t ever really follow each other.” Basically, she’s on your side.

She highlights each step of the editing process from the first negotiation to the final dubbing. Smith is absolutely the reality check we all need. As I look around the room I notice eyes widen at the mention of the months working in luxury on feature film and the even wider eyes at throwing together an independent film in haste.

The best is when she talks licenses. The filmmakers in the room are scribbling away and the composers nodding when she says, “If you want the Rolling Stones, just know that’s really expensive.” Maybe her best advice on making connections in general is, “Don’t stay home. Things just happen when we go outside and we’re involved.”

NO MORE CLIMBING THE LADDER

With professor and composer Chris Boardman

After lunch, we hunker down in Clarke for the rest of the afternoon. As a media writing and production major at the Frost School of Music, Chris Boardman is my program director and advisor. I hear him talk shop a lot. What I don’t hear is his full philosophy on the future of the industry.

The theme of the day seems to be saying “yes,” and taking a chance on the next step. In this case, it’s how we go about doing so as a creative consumer in an Internet driven industry. He shows a lot of statistics highlighting the shrinking professional class. For many things, “a barrier to entry no longer exists,” meaning anyone can make something and sell it.

He uses the 7 million subscriber decline for ESPN versus 175 million subscriber increase by 2020 for Netflix as an example, asking, “Millennials, how many of you pay for cable?” A small eruption of laughter ensues. My stomach drops the longer he talks—even he admits to spreading all this “doom and gloom” about the future.

What about quality? Where’s the center? If scarcity’s an illusion, how will anyone find me in the haystack? When it comes down to it, he says, he’d rather be 20 and starting out now. He doesn’t really know what the future holds. However today, it’s all about building your own brand and “aggregating an audience around you. You don’t have to climb the ladder; you get to be first in line. You get to be titans of the industry.”

On to the last leg of the day, we begin with some of Golub’s examples. He shows us Ice Storm, set in ’70s suburban Connecticut. A lot of the conversation is around the instruments fitting the feeling of isolation in the story because they have nothing to do with the area: Native American flute and gamelan.

Growing up just minutes north of the setting, I found it an accurate isolation, like being alone in the woods. We also watched scenes from The Laramie Project, about a gay man who was beaten and left to die in Wyoming. Golub describes keeping the piece in one key to make it feel claustrophobic. When the young man is kidnapped and driving up to where he’ll eventually be beaten, Golub decrescendos and ends on an unresolved chord as though hope is lost.

Following these examples, Antonin Sanko arrives and the presentation follows a similar format. Unlike the first composer, Mr. Howard, Sanko knew he wanted to compose for film from a young age. He ended up playing keyboard in pop because he was good at it, but as soon as he got any whiff of scoring, he ran for it.

“Directors are like jungle cats,” he says. “They detect fear and they pounce.” His remedy is to ask them questions: Why do they like the temp track? What do they absolutely not want? He says he spends a lot of his time trying to make people feel comfortable. His spotting sessions are “like a military operation,” thoroughly documented and very organized, which allows him to get to his points and really talk with his directors.

Sanko shows us some examples. First is from HBO’s Big Love, about a polygamist family attempting to lead a normal, suburban life under the radar. He explains he’d write in the same or similar keys so the music editor could rearrange sections if need be.

We discuss instrumentation—he’d use orchestra in the town and broken folk instruments on the compound. Then he shows us the film Rabbit Hole, in which a couple has lost their child. Again, the concept of writing from the character’s perspective comes up. Sanko, in this case, inhabited the mother’s role.

We end the day on questions. Filmmakers are eager to discuss the logistics of hiring a composer: How do I reach out to composers? To which Chris Boardman points out the six Media Writing students in the auditorium.

There are further questions for Mr. Golub and Mr. Sanko on their compositional techniques. “Don’t be maudlin,” says Mr. Sanko in regards to his work with horror films. We’re ready to meet each other and plan our next projects. We’re dismissed to a large spread of food and mingle for a while. I’m ready to take on a project. I’m excited to be the person on screen.