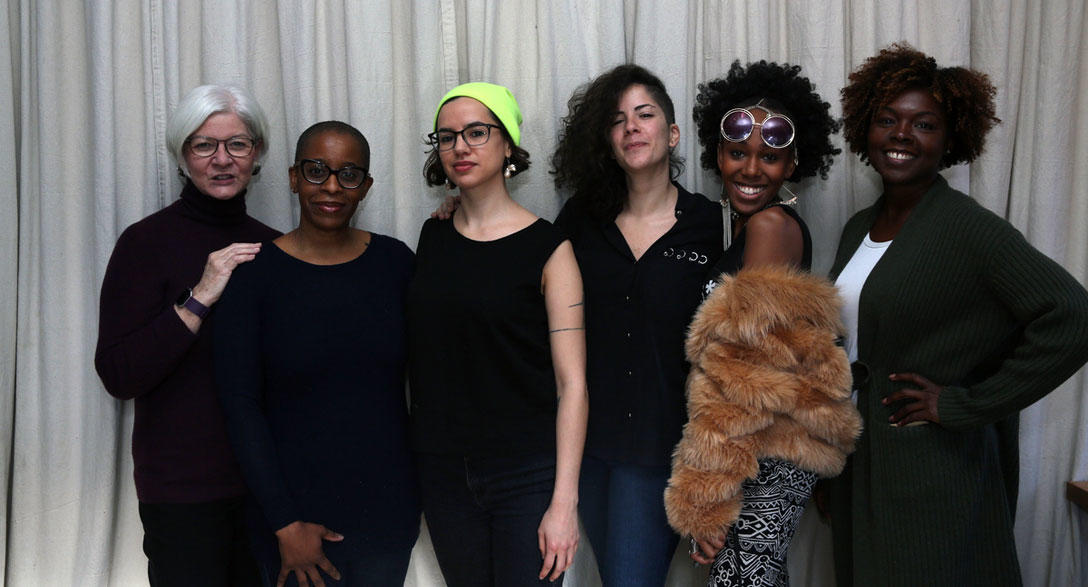 As part of our commitment to developing and nurturing the next generation of creative voices, Sundance Institute, with the support of the John S. and James L. Knight Foundation annually selects four Knight Fellows to attend the Sundance Film Festival in Park City, Utah. These emerging artists are identified and nominated by staff through community outreach networks established over the past five years in eight key cities, including Akron, OH; Charlotte, NC; Detroit, MI; Macon, GA; Miami, FL; Philadelphia, PA; San Jose, CA; and St. Paul, MN. Sundance Institute also identified potential nominees are also selected through the open application process for the Sundance Film Festival and Sundance Institute Labs and ongoing program outreach. The 2018 Knight Fellows participated in a five-day residency at the Festival, where they took part in a curated track of professional and creative development opportunities, including film screenings, receptions, performances, panels, networking events, and facilitated meetings with industry mentors and Institute alumni. Learn more about this year’s Fellows below.

Razan AlSalah is a Palestinian media artist based in Philadelphia. Her work formally (dis)aligns body, image, and place, particularly using visual perspective, scale, and re-photography to create (dis)connections between different times, places, and scales. She’s often thinking about how the image is an extension of the camera-body in space and how mapping an image can (dis)connect it from/to the viewer’s body. Razan’s work has exhibited at the Ann Arbor Film Festival Off the Screen! series, Blackstar Film Festival Lossless exhibition, and is in the permanent collection of the Sursock Museum in her hometown Beirut, Lebanon. Her latest short film, Your father was born a 100 years old, and so was the Nakba, won the Sunbird Award for Best Narrative Short at Cinema Days Palestine “for its poetic, multi-layered, and exquisite execution both linguistically, and aesthetically. A film which gives insight into a highly personal experience as well as a universal disposition of loss, injustice and distance…” and has been acquired by the Palestine Films Collection. Razan was a visiting artist at Duke University, Princeton University, Skidmore College, and the University of Pennsylvania. She is a 2018 Knight Fellow at the Sundance Film Festival and was a three-year Fulbright scholar pursuing her MFA in Film and Media Arts at Temple University where she now teaches; she is also a mentor at the CAMRA Fellows Program at the University of Pennsylvania.

Born in Asuncion, Paraguay, Bettina Escauriza is a filmmaker, writer, artist, and musician living in Philadelphia. She is a natural storyteller from a family of mystics, liars, thieves, and politicians. Her work deals with a range of topics including Indigenous issues, immigrant experience, environmental justice, philosophy, and feminism. Bettina is currently working on a documentary film, Medicine from the Earth, about the medicinal plant culture in Paraguay that is rooted in Indigenous ancestral knowledge. She collected footage for this film throughout Asuncion and in small towns and villages in southeastern Paraguay, and talking to a diverse group of people, from yuyeras (traditional healers), forest scientists, revolutionaries, campesinos, and Paraguayans of all walks of life who use this ancestral knowledge daily to keep themselves and their families healthy and maintain their traditions.

Aside from being a meditation on human/plant relationships, the film also explores the complexities of Paraguayan and Latin American identity — and tries to unravel the violent processes of colonization while at the same time interrogating the complexities of what it means to be Mestizo. Bettina has worked as a public school educator for many years, teaching science, filmmaking, foreign languages, and environmental justice to kids and teens in Oakland and Philadelphia. She was a mentor at the Intertribal Friendship House Traditional and Medicinal Plant Garden where she worked to break the school-to-prison pipeline by introducing youth to ceremony and traditional practice. She was lucky enough to come up politically in the Bay Area under the mentorship of members of the American Indian Movement and the Black Panther Party for Self-Defense — and their desire to thrive has been a motivating energy in her own work and vision.

Tisha Robinson-Daly is a writer and director from Maryland who lives in a cozy old house, filled with books, in a suburb outside of Philadelphia. She is an avid reader, wife, and mother, who uses her work as a platform to promote social change. In 2017, she was named one of the TOP 30 Writers by Roadmap Writers for her feature screenplay HIGH, which follows the lives of telecommunication tower climbers. She was Honorably Mentioned by SAGINDIE and was invited and attended the 2017 Stowe Story Labs, this September, in Vermont. At the end of September, she was approached and asked to speak at Moore College of Art and Design, in Philadelphia. She spoke to the first-year students on visual thinking and screened two of her films. She was one of 10 writers chosen to attend the Sundance Screenwriters Intensive in Philadelphia and was named Industry Advocate of the Month, for October, by a national telecom organization. She is currently in production on HIGH the documentary, which provides an intimate glimpse into the lives of those who have been directly affected by the dangers of tower climbing and those who climb, knowing the possible impending dangers.

Ahya Simone is a Detroit-based harpist, singer, artist, and organizer. When she graduated from Wayne State University with a degree in harp performance in 2014, she expanded from her classical roots to include jazz, R&B, and house, to craft her voice as an artist. Since branching out, her harp and composition skills have landed her opportunities to perform all over Detroit, Canada, and the U.K., score music for independent films (Treasure: From Tragedy to Trans Justice, Mapping a Detroit Story-2014), and bring her unique voice as a black trans woman creative to discussions nationwide. Currently, Ahya is a co-founding organizer of the trans advocacy collective, Trans Sistas of Color Project. As a musician and filmmaker, she is working on a debut music project as well as screenwriting/directing an upcoming narrative web series, Femme Queen Chronicles, that focuses on the narratives of two Black trans women and their experiences in Detroit.