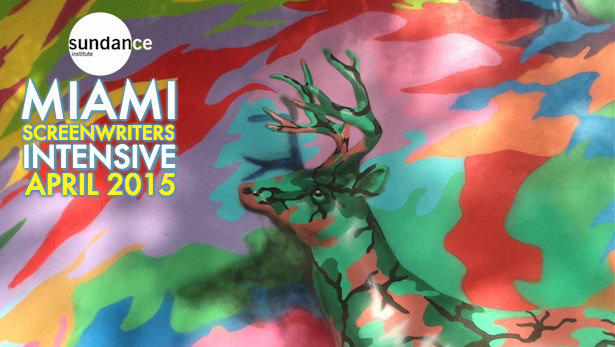 This weekend, Miami welcomes the Sundance Institute Screenwriters Intensive, supported by the John S. and James L. Knight Foundation. As part of the Institute’s efforts to create new opportunities to engage and support burgeoning filmmakers from diverse backgrounds, artistic practices, and regions around the country, the Knight Fellows Project invites 11 filmmakers to a day-long screenwriting workshop led by longtime Sundance Institute Labs Creative Advisor Joan Tewkesbury (Nashville, Thieves Like Us).

The 2015 Miami Screenwriters Intensive Fellows are an eclectic group, selected from a competitive application process that yielded over 115 submissions and highlighted Miami’s incredibly vibrant, thriving artist community and a desire for further engagement. The selected projects reflect the filmmakers’ diverse backgrounds and interests. They include a Nigerian folktale about a mythical mermaid witch, a psychological thriller grounded in Jewish mystical texts, and a forbidden love story set on the eve of Haiti’s first democratic election.

The first Sundance Institute program of its kind to come to Miami, the Screenwriters Intensive is modeled on the Institute’s renowned residential Labs and successful one-day workshops for emerging filmmakers. It is supported through a multi-year collaboration with the John S. and James L. Knight Foundation, which has a shared commitment to cultivating independent artists. Starting in 2013, with the Knight Foundation’s support, Sundance Institute began launching programming in eight communities to expand its reach and provide diverse artists with creative tools to apply to their work, create a space for dialogue about the filmmaking process, and foster new connections among storytellers and with the Institute.

We are thrilled to bring this exciting initiative to Miami! Here’s a look at the 2015 Miami Screenwriters Intensive Fellows.

A humorous and heartfelt tale of one man’s courage against all odds, for one last taste of victory in the game of bat and ball.

Beresford has more than a dozen years of experience as a producer and writer/director, working on award-winning international films, commercials, and television series ranging from German, Caribbean, and American productions. A Trinidad native, Beresford was heavily influenced by her parents’ involvement in the arts, developing her early love for filmmaking.

She is a director at Zaftik Studios in South Florida, producing creative works that have earned dozens of industry awards. Beresford has produced content for networks such as Discovery, MTV, ESPN, A&E, and the Food Network, to name a few. Recently, she has focused on writing and developing films that are culturally diverse and unique while exploring Caribbean and Caribbean American stories.

A distinctly Miami story of three brothers left adrift in the world of drug smuggling, Puerto Rican nationalism, and life on the streets, respectively. Ultimately, they are bound together and kept afloat by the unshakable bond of brotherhood.

Teo Castellanos is an actor/writer/director working in theater, film, and television. He received his B.F.A. in Theater from Florida Atlantic University under a full scholarship. His award-winning solo show NE 2nd Avenue toured extensively for a decade and won the Fringe First Award at the Edinburgh Fringe Festival, Scotland 2003. Castellanos is the recipient of several awards and grants including NEA, NEFA, MAP, Knight Arts Challenge, Knight Foundation People’s Choice Award, Miami Dade County Cultural Affairs, and also won the State of Florida Individual Artist Fellowship 2005 and 2013.

When Cameron, a teenager who has never met an electronic device he couldn’t live without, gets stuck on a North Florida archeological survey with his aunt, he comes to discover that time is more than the divide between breakfast and lunch, and lives can be changed when the line between the past and present is erased.

Polita Glynn is the director of the Pew Fellows Program in Marine Conservation, which provides awards to scientists and individuals across the globe for innovative projects designed to address critical challenges facing the world’s oceans. Before working for The Pew Charitable Trusts, she was a freelance project director, educator, and media writer/producer specializing in environmental and cultural programs, as well as media education. As an educator, Glynn worked for the Miami-Dade County Public Schools on media education programs in the public schools and served as the Seminar Program Director for the Miami Film Festival.

A psychological-paranormal thriller about a widower, unraveled by his grief, who comes to believe that the world will end unless he can locate and gather the Lamid Vovnicks—36 righteous individuals mentioned in the Jewish mystical texts of Kabbalah and Talmud. Their role, unbeknownst to them, is to justify the purpose of humankind, and his job is find them before it’s too late.

Andrea Greenbaum became interested in screenwriting after graduating from California State University, Chico and made her way to Los Angeles, where she worked for the DGA and WGA, editing their member directories. After attending UCLA’s Writer’s Program, she became a professional reader for Viacom, Tri-Star, New World, and Phoenix Pictures before receiving her Ph.D. from the University of South Florida. Executive producer Frank Spotnitz’s liked a spec X-Files script, “Golem,”and that script, along with several other unproduced specs, led to representation with Preferred Artists.

The killing of a local transgender woman causes a rift within the small town of Sanderson, Florida, and tests the bond of a conservative uncle and his effeminate nephew.

Faren Humes is a writer, director, and educator from Miami. Her short film Our Rhineland has garnered broad acclaim, including a Director’s Guild of America Student Film Award and an Academy of Television Arts & Sciences College Television Award. Humes studied filmmaking at Florida State University’s College of Motion Picture Arts. She lives and teaches film in Miami, FL, where she develops stories inspired by her place of origin.

Dr. Grace Landau and her crack team of forensic epidemiologists take on a powerful cabal in the U.S. government when they discover a series of illegal human research programs ordered under “Project Bioshield.”

Legere is a longtime freelance epidemiologist but found her real passion just three short years ago. She started writing in 2012 and quickly realized that her visual style of storytelling was better suited for screenwriting than a novel. Legere began to write and produce short films, the most recent of which was accepted into 18 festivals and nominated for over a dozen awards.

Born on a bus station toilet and abandoned, Johnny Girl yearns to return to the beach where she spent the happiest day of her childhood with her heroin-addicted foster father. But to get there she must confront extreme inner and outer violence, realizing she is more than just a “toilet girl.”

Leibell is a lecturer in screenwriting in the Cinema and Interactive Media Department at the School of Communication, University of Miami. She is currently collaborating on a political/war TV series with a former executive at HBO, and producing a short film with UM students based on the Stephen King short story “The Things They Left Behind.” She has also written several projects for Miami pop singer Gloria Estefan.

Sirah, a fun loving, free spirited but out-of-control alcoholic, is forced to move in with her annoyingly angelic sister and adorable, autistic 6-year-old nephew. As her sister’s new maid of honor, Sirah is dragged into organizing the upcoming big, fat Nigerian wedding! Things go from crazy to zany when her sister’s bible-thumping fiancé becomes convinced Sirah is cursed by the “Mami Wata,” a mythical Nigerian mermaid witch.

An aspiring writer, actress, and filmmaker, Italome Ohikhuare graduated from Columbia University with a BA in English and a concentration in Theater. She has written and starred in several NYC theater productions including Alice in Wonderland and Black Panther Women before switching gears and moving to LA to pursue film and television—first as an actress and then as a script analyst for film companies including Sony Pictures and The Weinstein Company.

Born in Harlem, New York, Haitian American filmmaker, Rachelle Salnave has balanced an extensive range of professional experiences. In a 10-year span, Salnave documentedchanges in her community by creating a film about the gentrification of Harlem called Harlem’s Mart 125: The American Dream which toured the country in 2010. In 2012, Wine Spector Magazine awarded Salnave “Grant Recipient” of the year for her work in showcasing Top Chef celebrity Ron Duprat.

After Fernando survives a high school shooting, he is wrongly framed for the attack and escapes to Mompox, a Colombian town where time has stopped. When his grandmother, a medicine woman, initiates him into the family’s shamanic rituals to find Guacas (pre-colonial treasure), he must resist temptation while finding his real destiny.

Learning from her father, a headstone mason, Ika Santamaria acquired a deep curiosity about unveiling characters and stories. The family has their own monument business in Colombia where she was trained from a young age in the art of selling headstones. On countless occasions when Ika accompanied the bereaved, merriment and laughter were key to overcoming their circumstances. Today, “to be alive” is a central theme in her stories. Santamaria studied dramatic arts at Teatro Libre in Bogota and then film at the Tisch School of the Arts at NYU.

Hiding in plain sight, a Haitian track star passes for African American, and when his secret is revealed, he stands to lose more than just a race.

Lolita Stewart-White is a screenwriter, filmmaker, and poet who lives and works in Miami. She was a part of the Miami Filmmaker’s Project sponsored by the Entertainment Industry Incubator and also the winner of ‘Pitch Miami’. Stewart-White has received fellowships from the South Florida Cultural Consortium in media and the Florida Division of Cultural Affairs in screenwriting.