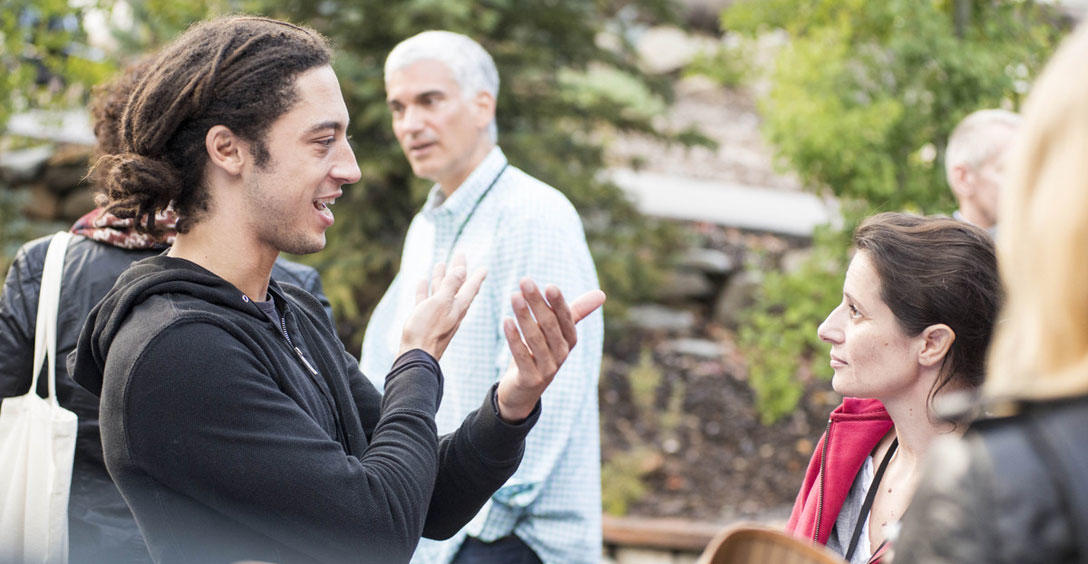 The just completed 70th Cannes International Film Festival also marked the premiere of five Feature Film Program-supported films. Paul Federbush, our International Director and Anne Lai, our Director of Creative Producing and Artist Support were both there to attend the premieres, host an Alumni Reception and experience this annual celebration of film through screenings and industry meetings. Although I didn’t attend, I read all the reviews of our films while taking great pride in the filmmakers and the visions that they brought to life and shared for the first time with worldwide audiences.

At the Labs and through our year-round support system, we work with filmmakers at an early stage in their careers on their first and second films. It’s a great privilege to participate in their creative process and provide a rigorous development program where they craft and further refine the stories that are singular and deeply personal to them. We create a family of storytellers who are part of a continuum of generosity that starts with the Lab.

In addition to these five films, I want to call out the Cannes premiere of Chloe Zhao’s second film The Rider, which was recognized with the Art Cinema Award for Directors’ Fortnight. The Feature Film Program supported Chloe on her evocative and astonishing first feature Songs My Brother Taught Me, which signified the launch of a filmmaker with singular vision, artistry, and humanity.

Enjoy the following entries as the Feature Film Program team illuminates the artists and their work with Sundance Institute.

Our journey with writer/director Jonas Carpignano began in 2012 during development of his first feature Mediterranea. From the Screenwriters and Directors Labs, to the Creative Producing Summit and Catalyst Forum, and our Global Filmmaking Award, Jonas touched many points of our program’s tailored support. After Mediterranea’s world premiere in Critics Week at Cannes in 2015, he continued to be enamored of a young boy whom he cast in both his previous award-winning short A Chjana and in Mediterranea. As he expressed to us, he needed to make a film about this boy while he still was a boy. Inspired by his time living in the working class and immigrant communities of southern Italy and supported by our inaugural FilmTwo Initiative, Jonas developed his second feature A Ciambra which made its world debut at Cannes in Directors Fortnight. Pio Amato stars as the 14-year-old Pio, a boy racing through childhood and rushing towards adulthood in a small Romani community in Italy. True to form, this beautifully made portrait of a teenage boy is exquisite in its embrace of neo-realism and true familial relationships in all their glory and complexities.

In both her documentary and fiction work, Chilean filmmaker Marcela Said returns to stories that explore the ongoing impact of the brutal Pinochet regime on Chilean society. For her second narrative feature Los Perros, which premiered in Le Semane de Critique at this year’s Cannes Film Festival, Marcela tells the story of an upper-class housewife whose complicated relationship with her horse-riding instructor forces her to confront her family’s complicity in the oppressive regime that gave her a life of privilege. Inspired by the subject of Marcela’s 2011 documentary El Mocito, the film is at once incisive, cutting social commentary and nuanced character study. We were thrilled to support Marcela at the 2014 January Screenwriters Lab, which offered her the opportunity to hone her vision for the film and is perhaps her most personal and ambitious exploration of this subject. Working with renowned actors Antonia Zegers and Alfredo Castro, Marcela has created an indelible, complex portrait of a woman both defined and constrained by her privilege as she navigates the still sharply-felt wounds that run throughout modern Chile.

Atsuko Hirayanagi brought her acclaimed short film Oh Lucy! to the 2015 Sundance Film Festival where it won the Grand Jury Prize for Short Film. We were immediately taken with Atusko’s uniquely sensitive and funny portrait of a lonely Tokyo woman who follows her English teacher to California. This past week, we were so proud to see Atsuko premiere her feature debut Oh Lucy! in Le Semane de Critique at the Cannes Film Festival, a five-year journey to the screen that Sundance Institute has been so proud to support.

Oh Lucy! also represents the Institute’s work with the Japanese broadcaster NHK, one of our most valued and longstanding collaborations. Together, we have supported Atsuko’s vision, first as a screenwriting fellow at the NHK Workshop, where she worked with veteran writer and Sundance advisor Erin Cressida Wilson (Girl On A Train, Secretary) to develop the project at the screenplay stage. Last year, Oh Lucy! was selected for the Sundance/NHK Award, a 20-year collaboration with Japanese broadcaster NHK that has supported films including Walter Salles’ Central Station and Benh Zeitlin’s Beasts Of The Southern Wild, among many others.

As she has expanded her story into a feature-length film, Atsuko has crafted a road movie that manages to balance absurdist bursts of comedy with a probing, at times deeply sad, character study.

We first met Antonio Piazza and Fabio Grassadonia after Salvo, their prizewinning first feature film that premiered in Critic’s Week at the 2013 Cannes Film Festival. At that time, Antonio and Fabio were inspired by an article in a local Sicilian newspaper about a mafia kidnapping and decided for their second film they would like to explore this incident’s impact on the small Sicilian village while simultaneously evoking children’s fables. Enamored by this concept, we invited Antonio and Fabio to spend an intense week exploring this story in our 2016 January Screenwriters Lab. After the Lab, we awarded Antonio and Fabio with our Global Filmmaking Award. The award, which was presented at our 2016 Sundance Film Festival, included a grant that allowed the filmmakers to continue developing the screenplay in the months that followed. The resulting film, Sicilian Ghost Story, premiered as the opening night film of Critic’s Week in the 2017 Cannes Film Festival.

In the film, Giuseppe, a 13-year-old boy, suddenly vanishes, but Luna, his classmate who is in love with him, refuses to accept his mysterious disappearance and begins a desperate search that disrupts her family and the rest of the inhabitants of the small village who live by a fearful code of silence regardless of their involvement with the mafia. Unlike many films inspired by stories ripped from the headlines, Sicilian Ghost Story is truly expansive in exploring the incident’s impact thanks to the directors’ focus on universal young love, the seamless weaving in of well-known references into children’s fables, and the gorgeous visuals of Paolo Sorrentino’s DP, Luca Bigazzi.

It’s rare enough to support a filmmaker with such clarity of vision, exacting artistic standards, boundless energy, and big heart – but to have so much fun doing it?! That’s been the gift of taking the Patti Cake$ ride with filmmaker Geremy Jasper. From the first time we encountered these characters on the page at our Screenwriters Lab, to watching Danielle Macdonald, Bridget Everett, and Sid Dhananjay bring them to life while workshopping scenes with Geremy at our Directors Lab, to seeing Geremy, “Killa P,” and company take the 2017 Sundance Film Festival by storm, we’ve been awed and inspired by this film’s journey. This is what happens when creative, committed, talented artists bring their hearts and souls (and a little bit of swagger) to a shared vision, and the result is a sight to behold. Their screening as the Closing Night film of Directors’ Fortnight at Cannes this year brought a shot of adrenaline and a whole lot of passion to the Croisette; we can’t wait for the rest of the world to experience the Jersey magic when the film hits theatres this August.