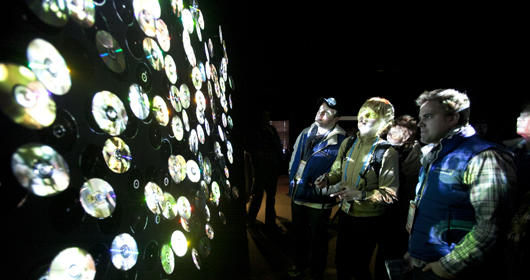 The Festival’s New Frontier space has not only moved above ground—this year it’s happening all over town. Sprung from the cavernous basement of a Main Street shopping mall to take over three entire buildings on the grounds of the historic Miners Hospital on Park Avenue, New Frontier has steadily grown from a tech-heavy sideline to become one of the defining features of the Festival.

As this year’s roster of films, exhibits, installations, and performances demonstrates, the paths of traditional and alternative visual media are rapidly converging. “There’s a certain mainstream sensibility of new technology meeting where we are in the film industry,” says Shari Frilot, the Festival’s senior programmer and curator of New Frontier. “This may very well be the turning point to the next chapter of storytelling.”

Hollywood is currently obsessed with old-fashioned 3D as an industry panacea, but New Frontier works experiment with full-bodied and temporal dimensionality, easily putting multiplex gimmickry to shame. Whether formally or narratively experimental, this year’s New Frontier artists suggest fresh ways forward for film culture yet create objects and experiences that are insistently present.

Seemingly the simplest, and definitely the oldest exhibit in the survey, Moony, by Japanese artists Takehisa Mashimo, Akio Kamisato and Satoshi Shibata, explores the innate ethereality of cinema by projecting digital butterflies into wavering columns of steam. They appear, they dance—putting a hand over the hot water steam will make them gather and scatter—they even cast miniature shadows before vanishing, as butterflies will. Subtly and elegantly, Moony conjures and utilizes organic materials even as it celebrates the synthetic magic of projection. Its uncertain surface is what gives it life.

Similarly, Squidsoup’s Glowing Pathfinder Bugs relies on the shifting surface of a sandbox to inform the behavior of projected virtual bugs. Designed as a tool for engaging children in a creative process, it literally requires that one get his or her hands dirty in order to play. “I like to bring in works that actually bring people physically together,” Frilot says. “That provoke the body in a physical way, not just by touching a button.”

Three New Frontier artists work both within and beyond traditional screens and narratives, with Lynn Hershman Leeson (RAW/WAR) and Braden King (HERE: The Story Sleep) putting together site-specific and virtual accompaniments to feature-length films that are screening in the Festival lineup. Lance Weiler, whose narrative short Pandemic 41.410806, -75.654259 is just one facet in a wildly ambitious transmedia project that connects online activity with real-life, Park City-wide game-play, gathers usable, R&D data in the process. “Feature films are going nowhere,” adds Frilot, “but their story worlds might expand into your home.”

Over the course of the past year, transmedia has evolved from a nerdy, visionary buzzword into a working philosophy for the present and future of film. “This is one of the years that marks a turning point,” Frilot says. What started on stages led to screens, she says, now bringing us “to storytelling that unspools around us, over the course of different temporal lines and platforms. Stories that follow us as we walk through our lives.”

Which is exactly what happens in the fully experiential body and mind-trip A Machine to See With by the English group Blast Theory. Eschewing tangible visual media altogether, the piece is comprised of a series of instructional (and wryly manipulative) phone calls to transform the external world into a subjective screen of the imagination. It demonstrates how easily we can operate within clichés of film that we’ve long internalized and inform how we move through space.

How we’ve internalized media informs several other pieces in New Frontier, and all suggest that our technological march into the future will drag a long tail of subjective and material memory. In Theater III + Edgar, artist Avish Khebrehzadeh collapses millenia of media onto a single surface, projecting digital animation onto a box framed by a painting of an old-fashioned theatre. Meanwhile, Daniel Canogar’s twin installations – Spin and Hippocampus 2 – are surprisingly empathetic constructions from discarded media objects.

“I feel like I’ve exhausted my memory,” says Canogar. “A lot of my work is an attempt to try to conserve things before they disappear.” In Spin, a wall of reclaimed DVDs serve as tiny, reflective screens for pointillist projections of their own content, while in Hippocampus 2, obsolete telephone cables are reanimated by light. “Technology seems to be increasingly alive, particularly when it becomes obsolete,” he continues. “There’s something that makes these things very human.”

In Three’s Company: The Drama, James Franco remembers the popular 70s television sitcom as something spookier and more nefarious than it intended, a cultural and visual text to revisit and re-imagine. And in two works by Chris Milk and Aaron Koblin, innovative, interactive Internet technology is employed to memorialize the past: The Johnny Cash Project invites participants to illustrate individual frames of a video tribute to the late music legend, while The Wilderness Downtown uses Google Maps to create an individualized memory machine to accompany Arcade Fire’s “We Used to Wait,” a song that laments the demise of snail-mail communication.

“It’s human nostalgia created from the most advanced technology available,” says Milk. Which is exactly the kind of clash that helps to define what New Frontier is all about, positioned as it is at the meeting point of film and multi-media, narrative and abstraction, virtual and physical, technology and humanity. Rather than a single-file march forward, New Frontier reflects innovation as rather a diffuse mixing, tumbling and scattering outward.

“New Frontier is about getting all the right minds in the same room,” says Frilot, “into a social environment so that they can have that conversation and potentially innovate and expand the culture.”