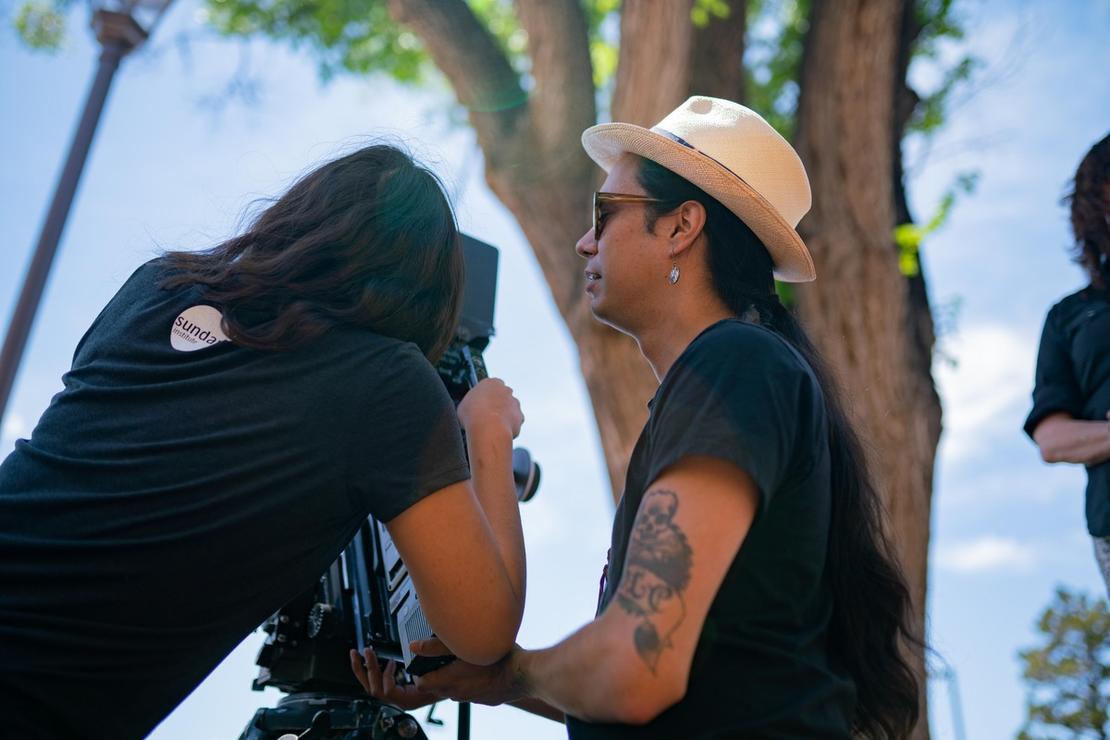 In a year marked by a devastating global pandemic that has disproportionately affected Black, Indigenous, and communities of color, as well as societal unrest spurred by systemic racism and violence, Indigenous artists across the country have found strength in the ways of their ancestors. From the shores of Hawai’i to the heart of the Seneca-Cayuga Nation, they have reconnected with their families and their land, lent their assistance to those in need in their communities, stood with #BlackLivesMatter in the fight against white supremacy, and helped topple monuments venerating genocide and colonialism.

As we prepare to celebrate Indigenous Peoples’ Day on Monday, October 12, we asked three Native filmmakers — all alumni of Sundance Institute’s Indigenous Program — to reflect upon the holiday’s significance amidst this challenging but transformative year. Below, Rob Fatal (Raramuri/Ute), Ishkwaazhe Shane McSauby (Gichi Wiikwedong Odawa Anishinaabek), and Petyr Xyst (Laguna Pueblo) speak to the rich history of the Indigeous people who have called Turtle Island home for more than 7,000 years, the lasting effects of state-sanctioned violence on Native sovereignty, and why we must celebrate Indigenous Peoples’ Day every day. To find out more about Indigenous Peoples’ Day, visit our partners at IllumiNative.

On Indigenous Peoples’ Day, we need to remember that storytelling is sacred medicine: It has the power to shape, create, and breathe life into any reality we can dream of. But for centuries, since colonization, the white eurocentric story of “Indians” on this land has brought about a horrifying reality for the millions of Indigenous people who call Turtle Island home.

In this skewed colonial narrative, we learn that christopher columbus bravely sailed across the ocean and discovered a few people living in small tribes on these lands. In this “new world,” there was plenty of empty land and god-given right for europeans to claim it as their own. Moreover, the narrative tells us that these uncivilized savages were better off under white european law and religion. These narratives were spread for hundreds of years through history books and, since the early 1900s, cinema. These false narratives pollute the minds and spirits of Indigenous and non-Indigenous peoples alike, affecting self-esteem, law, discrimination, spirit, and our Earth, to name a few things.

Indigenous Peoples’ Day, one of the products of hundreds of years of Indigenous resistance, is the reclamation of our narrative on this land.

Programs like the Sundance Institute Native Filmmakers Lab continue the sacred storytelling work of Indigenous Peoples’ Day year-round by creating a community centered on incorporating Indigenous storytelling practices into cinema. These self-authored narratives preserve our Indigenous pasts, address our current lives, and imagine futures where Indigenous people not only survive but thrive. This is the power of authoring our own cinema and storytelling, and this is happening at a crucial moment.

As california is ravaged by massive forest fires due to centuries of outlawed Indigenous controlled burning practices and stewardship, as border walls of a colonial american empire destroy sacred Kumeyaay lands, as pipelines continue to rob our creator’s Earth of its resources and make life uninhabitable, as Indigenous children are locked in cages for crossing borders built around their ancestral homelands, as Indigenous women continue to go missing, our Indigenous narratives provide visibility, hope, and medicine for a better world.

Born and raised in Grand Rapids, Michigan (traditional territories of the Grand River Band of Odawa Indians and Nottawaseppi Huron Band of the Potawatomi), and writing from New York City (Lenapehoking), Ishkwaazhe received a bachelor’s degree in filmmaking at Grand Valley State University in December 2015.

He is a 2016 Native Filmmakers Lab Fellow, and recipient of Indigenous Film Fellowships in 2017 and 2020. His short film, Mino Bimaadiziwin, has screened at film festivals such as Vancouver International Film Festival and Traverse City Film Festival, and has been nominated for Best Short Film and Best Direction at the Eclipse Awards. Ishkwaazhe is currently a student in the MFA program in writing/directing at NYU’s Tisch School of the Arts.

I think most non-Indigenous people do not truly understand that we survived genocide. Actual genocide. The colonization of this land resulted in the mass murder of Indigenous peoples. There were tens of millions of us before Columbus washed up on the shore, and by the 1890s there were only 250,000 Indigenous people in the so-called “United States.”

But settler colonialism was not a singular event: It is a structure and ongoing process. Today, the effects of settler colonialism are illustrated in Native statistics. We face the highest rates of police violence, highest suicide rates, highest rates of alcoholism and addiction, lowest life expectancy, highest unemployment — the list seemingly goes on. These statistics are a direct result of military, political, and social warfare (war crimes) implemented by the United States government and other settler colonial forces. They are a direct result of over 500 years of ongoing colonialism.

When we celebrate people and institutions that reinforce white racial superiority and colonial dispossession, we endorse racial discrimination and ongoing settler colonial violence. We must abolish all holidays and systems that celebrate genocidal war criminals. We must tear down every statue and institution that perpetuates false histories and normalizes genocide. Instead, we must celebrate Indigenous Peoples’ Day every day by following the guidance of our ancestors who fought for freedom and liberation from the settler state.

We must channel the energy of the elders that came before us who risked their lives to exercise treaty rights and practice sovereignty. In the words of John Trudell, “We have to devote our lives (to it). We have to make our commitment. We have to follow a way of life that means we are going to resist forever.”

Petyr Xyst is a 2019 Indigenous Program Full Circle Fellow and 2020 Native Filmmakers Lab Artist-in-Residence from Albuquerque, New Mexico (occupied Pueblo territory), whose work focuses on themes of class, institutional failures, and the strangeness of coming of age in the 21st century. He was recently nominated for Rolex’s Mentor and Protégé program, is currently at work on a short due out in 2021, and is a student at the University of New Mexico.

A lot is happening right now — you don’t need me to tell you that — but I still don’t think most of us grasp just how much is happening. 2020 has been a flashpoint year that many of us haven’t seen before in our lives, from a once-in-a-century pandemic to unprecedented civil revolt against our racist police system to an election season that will decide how just quickly our nation spirals into fascism.

People are starting to realize that we’re not just on the precipice of authoritarianism — we’ve been falling down the rabbit hole for generations. Our institutions aren’t simply outdated; they were built to oppress from the beginning.

I can tell you, at least from the point of view of a young person in America, that our generation is panicked — and angry. And from a young Indigenous perspective, I can feel our community mobilizing against modern imperialism in a way I haven’t ever seen before, likely spurred and compounded by the circumstances mentioned above. People are starting to realize that we’re not just on the precipice of authoritarianism — we’ve been falling down the rabbit hole for generations. Our institutions aren’t simply outdated; they were built to oppress from the beginning.

The Indigenous perspective has had a bit of a resurgence lately, standing beside the Black Lives Matter movement against state-sanctioned violence as well as fighting our own battles as they relate to the United States’ continuing assault on Indigenous sovereignty, whether that be in the revocation of recognized tribal status, to the not-only-incompetent-but-malicious response to COVID-19 outbreaks across Indian Country, or the increased adoption of blood-quantum practices. Many of us are standing in support with Black Lives Matter because we understand the issues they’re speaking of, and, conversely, many within the Black Lives Matter movement are standing with us in our continuing quest for justice.

Indigenous Peoples’ Day, in particular, is an example of the momentum these movements are building. The repurposing of a holiday celebrating a internationally recognized genocidal maniac into one recognizing the people who resisted against that genocide is symbolic and deeply significant. While it is immaterial — the name itself will not give #LANDBACK or stop the drilling of sacred lands — it is an indicator of a larger shift, using the mechanism of culture to reframe the history we’ve been indoctrinated with since kindergarten.

Changing the attitudes of young Indigenous children (and all children, ultimately) from cowering in humiliation in class whenever October 12 rolls around to one where they feel empowered and proud of their ancestors is profound. It builds a confidence that may change the world.

Sundance Institute’s Indigeous Program is currently accepting applications for its 2021 Merata Mita Fellowship, which cultivates a stage for Indigenous women worldwide to tell their stories and offers a year-long continuum of support, mentorship opportunities, and more. Apply by October 26.