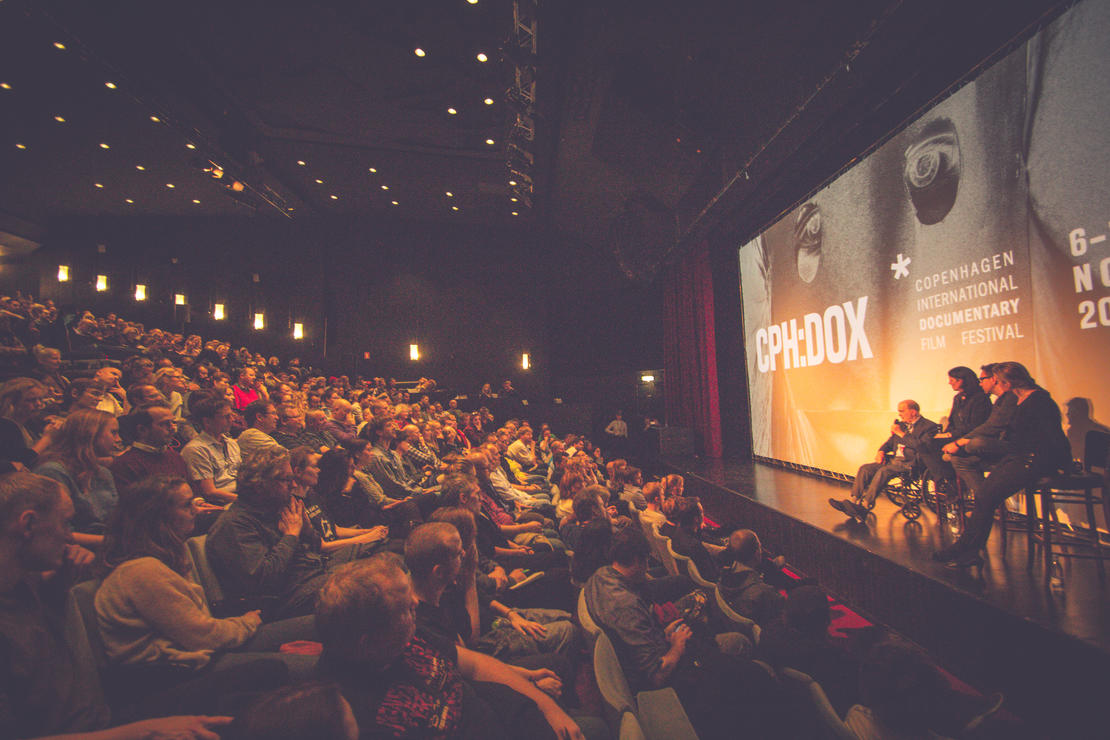 After a week of inspiring statements regarding the importance of cinematic artistry in documentary by, among others, our fearless leader Tabitha Jackson and The Act of Killing director Joshua Oppenheimer, it’s evident that the conversation around the art of non-fiction storytelling is getting louder. That conversation was in full flow in Denmark recently as the DFP attended CPH:DOX to cheer on 11 DFP-supported films in the program, connect with filmmakers outside the orbit of our support, and find exciting new projects and artists at the CPH:FORUM.

Held annually in Copenhagen, CPH:DOX provides a unique blend of community, conversation and passion for non-fiction storytelling in all forms. This year’s program, overseen by Festival Director Tine Fischer and co-programmed by Niklas Engstrøm and Mads Mikkelsen, presented an uninhibited and unapologetic promotion of risk-taking within the non-fiction field.

CPH:DOX has been carefully built around a core culture of open-minded support for non-fiction artists. Simply refer to the festival program, which found Laura Poitras’ CitizenFour and Oppenheimer’s The Look of Silence competing with films such as Robert Greene’s Actress, Camilla Nielsson’s Democrats and Pedro Costa’s Horse Money in main competition for the DOX:AWARD. (The Look of Silence ultimately won out, resulting in an emotional acceptance speech from Oppenheimer acknowledging his investigative journey having strong roots with the festival and in Copenhagen itself, the city he now calls home.)

In fact, the main competition is only the tip of the iceberg when it comes to the range and array of films shown by the festival. Their HITS, POLITIK , KUNST (ART & ARTISTS), DRAMA! And MUSIK sections display both a robust collection of non-fiction artistry from around the world along with films on the cutting edge of blending fiction and non-fiction to create engaging, exploratory storytelling techniques (Andreas Koefoed’s The Arms Drop, Petra Costa and Lea Glob’s Olmo and The Seagull).

Then there’s CPH:FORUM. Expertly moderated by Jess Search, CEO of BRITDOC, and Ingrid Kopp, Director of Digital Initiatives for the Tribeca Film Institute, the Forum provides a platform for artists to pitch projects in development and production, each categorized by CINEMA, FICTIONONFICTION, F:ACT, and ART, to a cleverly curated set of panels, which went beyond the usual broadcast commissioning editors and included other film friendly cultural institutions including MoMA and The Cartier Foundation.

The Forum created a space in which the desire to explore an issue from an artistically investigative perspective was celebrated, and where potential supporters were asked to meet the artist halfway in their vision. There was seldom talk of a project not ‘fitting into mandate’, and if there was, members were asked to consider how they could help outside of traditional means (the “if you can’t help, do you know someone who can?” model that Search has made a core tenet of her Good Pitch model). When all was said and done, the Forum’s slogan, ‘Business As Unusual’, far exceeded its implications in the best of ways.

At a small Sundance cocktail reception surrounded by the likes of Laura Poitras, Michael Madsen, Joshua Oppenheimer, Lise Lense-Møller, Signe Byrge Sørensen, Robert Greene and Janus Metz, we were glad to gather with colleagues old and new to raise a glass to the non-fiction filmmaking community.

Whether through conversations with Klara Grunning-Harris, film commissioner at the Danish Film Institute on how the DFI supports their artists in development; or basking in the genius of The National Film School of Denmark’s legendary Arne Bro whose philosophy has influenced a whole generation of Danish non-fiction filmmakers; or through countless encounters with talented Danish directors, producers, and editors, we have come back awed, inspired, and determined to continue the creative dialogue.

Skål, Copenhagen. See you next year.

Other DFP/CPH:DOX highlights included (but certainly were not limited to):

The Look of Silence