An Arts Festival in Egypt Draws Creativity From Conflict 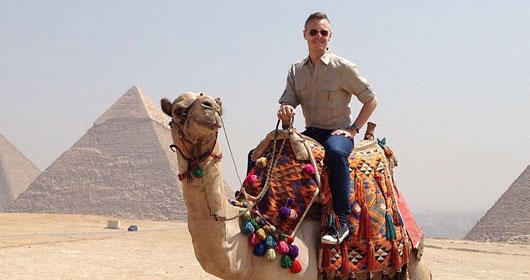 Tonight is my last night in Cairo. I’ve been here for almost one week attending the Downtown Cairo Arts Festival. This is my first visit to Egypt, and I must admit that prior to my coming here, I was a bit apprehensive about my safety, given the western media’s portrayal of the Revolution and subsequent attacks. I anticipated being fearful of my American citizenship and witnessing a city in shambles. In fact, I almost didn’t make it. The day I departed, a bombing occurred near Cairo University.

But six days later, I am beyond happy that I chose to show up. I have enjoyed getting to know a rich and vibrant community of artists who are creating theater in the midst of significant social change and independent artists who deserve to “be seen” by the global community. Not only has my time in Cairo been a safe one, but I have felt an unparalleled embrace from the Egyptian people. Which reminds me of a quote from my favorite film of all time, Strictly Ballroom: “A life lived in fear is a life half-lived.” I know it’s a cheesy movie, but early Baz Lurhmann got it right!

Along with a handful of intrepid visitors from around the globe, I have seen performances, participated in panel discussions and had countless meetings with Egyptian theater and film artists. I have enjoyed Turkish coffees with talented individuals and had the pleasure of seeing a number of Cairo performances spaces (as well as a pyramid or two). It is remarkable that Festival director Ahmed Al Attar and his dedicated team have successfully produced a festival in this colorful, chaotic city. Cairo traffic is epic, and I’ve navigated congested highways and narrow alleys with the help of my drivers.

The work here has been largely “documentary theater,” which is allowing the local community to process the revolutionary events and censorship of the last few years on stage. I’ve had deep, meaningful chats with a wide range of individuals, from established independent producers to theater-makers putting up shows in bookstores and coffee shops. This town loves its theater.

So why am I here? The Theatre Program is committing to theater-makers from the Middle East & North Africa in the coming years and I have been here conducting research and engaging in conversation with the artist community to determine how Sundance Institute can best support storytellers here. Perhaps some day soon we will have a Lab in the region. I know my colleagues from around the Institute are also exploring ways to support MENA artists as well.

It is an honor to travel around the world on behalf of Sundance and it has been a pleasure to do so in East Africa for more than eight years. As we officially transition the focus of our international programming from East Africa to MENA, we will strive to maintain a vibrant “triangle of exchange” with EA/MENA and American artists. Why? Because we feel that there are stories beyond our own borders that need to be heard; that artists creating work in midst of social change specifically deserve our support. And Americans need to show up in the global conversation.

Is this work important to you, too? I’d love to hear your thoughts on Sundance Institute working internationally. I invite you to email your thoughts to me at christopher_hibma@sundance.org. Perhaps you’d like to join me on a future experience in the MENA region as an artist or a donor. I’d enjoy hearing from you.

Shukran (Arabic for thank you).