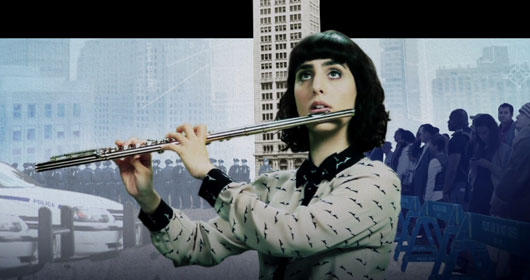 Joshua Frankel and Judd Greenstein’s Plan of the City, which inspired “Untitled Opera.”

In October 2013, Joshua Frankel (Director) and Judd Greenstein (Composer)participated in the New Frontier Story Lab with the project  Untitled Opera about Robert Moses and Jane Jacobs.  This innovative opera explores the epic battles between Jane Jacobs and Robert Moses over the future of New York City. From Jacobs’ victory in stopping Moses’ destruction of Washington Square Park, to Moses’ efforts to build the Lower Manhattan Expressway across SoHo, this work catalyzes an important conversation about what principles and values our generation will use in building, managing and sustaining urban spaces in the 21st Century. It is projected to premiere in 2016.

The Rockefeller Foundation has added its financial support to the artists’ work on the opera by approving a grant to the project through the Sundance Institute| Rockefeller Foundation Impact Fund. The Foundation’s investment in bettering cities is demonstrated by its 100 Resilient Cities initiative, which helps cities prepare for and bounce back from shocks and stresses, and the Jane Jacobs Medal, awarded to New York community leaders who have adopted Jane’s human-centered principles to urban engagement.

Frankel, Greenstein, and librettist Tracy K. Smith will also produce a series of projects in other media. Central to this will be an education program that teaches students, including those raised in or near Moses’ housing projects, about these two pivotal figures and how their work shapes our lives today, and asks them to design their own visions for urban housing. This will be interactive in the timeless sense of the word: there will be human interaction (as Jacobs would insist) and the bold design of physical works (as Moses would have enjoyed). In addition, the team hopes to mount an exhibition placing the works of Moses and Jacobs in the context of artists who respond to the urban environment, and host walking tours or panels led jointly by urban planners and artists who make work about the city.

Joshua Frankel is a director, animator and visual artist whose work responds to the urban environment with a boyish sense of wonder, an idiosyncratic eye for detail, and a conceptual and aesthetic interest in the act of collage. His most recent film, Plan Of The City, combined animation with live action footage to tell a story of buildings blasting off into space and resettling on Mars; it was called “One of the best matches of visuals to music I’ve seen” by Anne Midgette ofThe Washington Post and “Gorgeous” by Alex Ross of The New Yorker. Frankel has also created over twelve thousand square feet of public murals in collaboration with his wife, Eve Biddle, designed projections for musicals at Lincoln Center and on Broadway, and directed YouTube videos commissioned by President Obama’s 2008 campaign. His work has been presented recently at institutions including BAM, the London Institute of Contemporary Art, the Museum of Public Art in Sweden, the Annecy International Festival of Animation and the recent UN World Urban Forum.

Judd Greenstein is a Brooklyn-based composer of structurally complex, viscerally engaging works for varied instrumentation. His work has been heard at venues such as Carnegie Hall, the Tanglewood Festival of Contemporary Music, Amsterdam’s Musiekgebouw, the Bang on a Can Marathon, and the MusicNOW festival; recent commissions include those from the Minnesota Orchestra, the Alabama Symphony, the Claremont Trio, ETHEL, yMusic, and Roomful of Teeth. Other current projects include a song cycle for vocalist DM Stith and orchestra. In addition to his work as a composer, Judd is active as a promoter of new music in New York and around the country. He is the co-director of New Amsterdam Records/New Amsterdam Presents, an artists’ service organization that supports musicians whose work is open to all influence, regardless of genre. He is the curator of the Ecstatic Music Festival in New York’s Merkin Hall, an annual showcase of new collaborative concerts between artists from different musical backgrounds, and he is a founding member of NOW Ensemble, a performer/composer collective that develops new chamber music for their idiosyncratic instrumentation of flute, clarinet, electric guitar, double bass, and piano. Judd has studied at the Tanglewood Music Center and the Bang on a Can Summer Institute and holds degrees from Williams College, the Yale School of Music, and Princeton University.

Tracy K. Smith is the author of three books of poetry: Life on Mars, which received the 2012 Pulitzer Prize; Duende, recipient of the 2006 James Laughlin Award, andThe Body’s Question, which won the 2002 Cave Canem Poetry Prize. She has also been the recipient of a Rona Jaffe Award, a Whiting Writers’ Award, an Essence Magazine Literary Award, and a Wallace Stegner Fellowship from Stanford University. She is professor of Creative Writing at Princeton University.