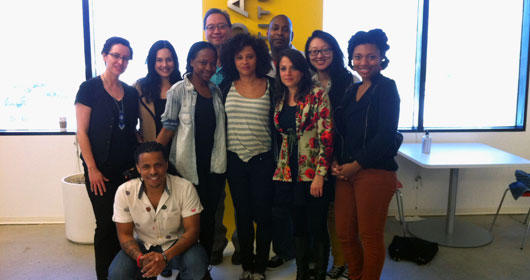 Group shot of the Screenwriters Intensive Fellows at the Sundance Institute offices in Los Angeles.

Fortunate to be among 10 diverse writers, I descended upon the Sundance Institute offices last Thursday to participate in the second annual Screenwriters Intensive: Los Angeles. Feature Film Program lab director Ilyse McKimmie conducted warm introductions on behalf of the gathered Feature Film Program staff and interns. She set the day’s intention: to be bold and not to be “defended.” Listen to each other. The goal was to leave asking the right questions about your story.

The Screenwriting Fellows introduced themselves and their respective projects; I peeled my breakfast tangerine thinking —I want to see that film. And that one. Oooh, esa también. After everyone’s introductions, the day was handed over to our master teacher, Joan Tewkesbury (Nashville). She asked if we had written biographies for our protagonists—we all raised our hands. She then asked us to write down five names, followed by the instruction to write our protagonist’s obituary, bullet-point style.

When she asked us to read the obituaries aloud, Joan modeled the active listening she also insisted from us. “Speak up, start over, raise your head, and slow it down,” she commanded, reminders to take ownership of our voices. She prodded us with questions, especially if we left any detail murky.

Takeaway #1: You can never get too detailed with your characters’ lives.

We started the first of many lists: Three things your character wants. Three things you personally would hate to give away. Three beds you remember. Write down a sound that disturbs you. We read these lists aloud—and because we included personal information, hiding behind our characters was not an option. Joan had us pick one item from each list and plunged us into prose writing. This was Joan’s modus operandi: sharing openly and making us deeply identify with our characters.

Takeaway #2: As Joan stated, “You are always writing about yourself.”

This sums up the first 20 minutes—no wonder we were famished by lunchtime. Did I mention we were writing old-school style? Pens and papers, ya’ll. After lunch, she continued to show us how to trick our rational selves by “taking the back door,” to mine the rich subconscious of our experiences. As fellow participant Ya’ke Smith wrote, “Subjects that we’d hoped to explore… became flesh of our flesh and bone of our bone.”

Takeaway #3: Find other ways to write, not just on your computer, because other methods help you see your work differently.

After our writing sessions, we watched the Sundance Film Festival Best of NEXT winner Imperial Dreams by co-writer/director Malik Vitthal. To say my spirit broke open at this film’s devastating climax is an understatement. After the screening, Vitthal graciously shared his process about making the film, talked about his voice as a filmmaker, and his artist trajectory.

Takeaway #4: After our work with Joan, this screening was a perfect example of where our efforts could lead to… a beautifully wrought story.

By our evening reception, every fellow I saw mirrored my own exhaustion and buzzing creative energy. We returned the next morning to meet with two assigned advisors. They gave us feedback on our scripts, and, for me, this was a priceless component. Critical eyes on my screenplay gave me new ways to imagine how I might infuse my script with what I learned in the workshop writings.

Takeaway #5: Sundance Institute is truly a community of filmmakers and advocates who want to see your films made.

In the end, you do the writing rituals, because you believe in them; because they’ve been passed on and they work themselves on you; you listen deeply; you pray to see more clearly. Moreover, if the space and peoples gathered are led through the rites in a purposeful manner—you leave transformed.