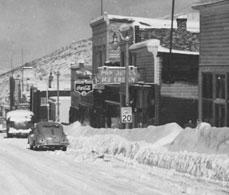 As Festivalgoers prepare to travel from all over the world to attend the Sundance Film Festival, their journeys to Park City would never have been possible without the evolution of transportation methods from the blazing of the Oregon trail to the expansion of the transcontinental railroad. Advancements in transportation have literally paved the way for Park City as it stands today.

Through the discovery of silver around Park City in 1868 and the completion of the railroad in 1869, Parley’s Park City was established with a population of 164. Others soon followed, including George Hearst, father of newspaper mogul William Randolph Hearst. His Ontario Mine, originally purchased for $27,000, eventually produced over $50 million in profits. By 1884, Park City was officially incorporated with a city hall and within the next five years Main Street had electric lights to welcome its growing mining industry.

However, for Park City the next hundred years proved to be tumultuous from the ups and downs of mining trends, a disastrous fire in 1898 wiping out three-quarters of the town, an underground explosion in 1902, a town grappling with treating miners for lung ailments, and the population fluctuating along with these hardships. As the mining industry crept towards extinction, the town unknowingly transitioned to the next big industry in the late 1920’s as Scandinavian locals built sledding lanes for children’s games, sparking a new favorite past-time.

Over the next several decades, a rope tow for skiers was built, a ski jump on the Creole mine was built in 1930, and in 1931 Alf Engen set a world record for jumping 247 feet at Ecker Hill. Transportation would once again revitalize the area, as special trains were designated to haul skiers from Salt Lake City to the slopes of Deer Valley.

In 1965, a major innovation transformed a mining train into a ski lift taking skiers to the Spiro Tunnel then up a shaft to the top of the mountain, even incorporating a gondola. Sondra Morrison, executive director of the Park City Historical Museum, notes, “The mining companies opened up the ski resorts to keep the town alive, so they used their own technology to build the skiing resorts.”

By 1980 the last working mine closed, but the ski industry was thriving with continued activity at Park City Mountain Resort and the opening of the Deer Valley Resort. Park City’s population would continue to grow with the emergence of this industry, eventually becoming a host of the quintessential international gathering: the 2002 Winter Olympics.

The Sundance Film Festival found its home in Park City in 1985 and continues to bring tens of thousands of visitors to the town every January from around the globe. “The intimacy of Park City helps to create just the right atmosphere for the Sundance Film Festival. The juxtaposition of the winter weather, especially the snow, to the warmth of the screening rooms and the storytelling that happens there, greatly contributes to the magic that happens in Park City during the 10 days of the Festival each January,” says Jill Miller, Sundance Institute’s managing director.

“Park City has achieved such international notoriety as a word class ski destination and site of the 2002 Olympics,” Miller continued. “The Festival’s growth in attendance and visibility over the past 20-plus years has also added an international cultural flare to the City. It’s the perfect fit for our event and we are thrilled to call Park City the official home of the Sundance Film Festival.”