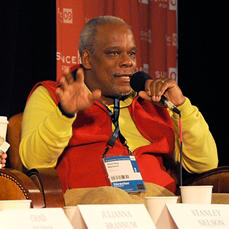 Stanley Nelson has been writing, directing, and producing documentary projects for more than two decades. His 2009 Sundance Film Festival entry, Wounded Knee, is the fifth and final episode in his series chronicling key moments in Native American history and culture (the series airs on PBS’s American Experience). Wounded Knee centers on the events that took place among inhabitants of the Pine Ridge Reservation in 1973 and the occupation of the town Wounded Knee as an act of resistance against the U.S. government’s negligence in addressing the rights and needs of Native American people. Read our interview with Nelson to discover more about the film.

You’ve produced a powerful body of work dedicated to social issue and historical documentary, but there must be dozens of forgotten histories or untold stories you’d like to tell. What made you want to tell this particular story?

We were just finishing up a film that we did for American Experience, and they called and said they were doing a huge series on Native American history and wondered if I’d like to be part of it, and suggested I work on the final episode, which would deal with Wounded Knee. I could remember this event from the past, and I said yes. I almost felt teary-eyed to be asked to participate, though, because I was really inspired by Wounded Knee.

I was amazed by the quality and breadth of the archival material you found.

We knew there was some material about the takeover of Wounded Knee, but we had no idea how much material there was. When we sent our first request to ABC and NBC, we asked them to make a screener, but they said, “No, there’s way too much material!” But that was a good thing—I spent a full two weeks looking at material from 9:00 a.m. to 6:00 p.m. every day just to pick the material that we might use.

But why was there so much material? And why is it so detailed?

Someone told me that Wounded Knee was the third most filmed event of the ’70s, after Vietnam and Watergate. One of the things that happened was that because Wounded Knee was in the middle of nowhere, the networks had to assign crews to go and stay there, so you had these film crews stuck in the middle of South Dakota with nothing to do but film all day, every day. I also think the news crews had greater access, and the rules determining what could or couldn’t be shot weren’t as solid. At one point, the press was asked to leave Wounded Knee by the government but several crews didn’t leave.

The kind of racism illustrated in the film is nuanced and complex, and seems so completely interwoven into American culture. What kinds of strategies do you think work—specifically with filmmaking—in battling such endemic racism?

I think one of the things that we really struggled with in the film is not to be simplistic. But that’s always a double-edged sword. On one level, it’s really very simple—it’s black and white because the results are black and white. You also had Dick Wilson, who was Native American but is one of the villains of the piece. I felt that it was important to show that. It’s not just Native American people against white people. In some ways, the battle started because it was Native American people fighting among themselves. So that’s something we really struggled with—how do you tell this story in a way that’s interesting and entertaining and with forward momentum when you have so much backstory?

What are some of our responsibilities as viewers once we’ve seen a film such as Wounded Knee?

Really, I think the first step for me is to make people aware, and make them aware of the underlying issues, and that opens up a crack in the window so that people can investigate further. But mainly I want people to understand this story, a story that has disappeared from our consciousness.