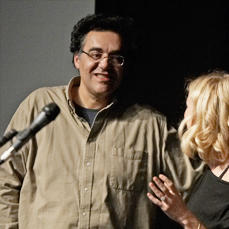 A son of Nobel Prize–winning magical realist Gabriel García Márquez, Rodrigo García is an artist in his own right. His credits as writer and director include Things you can tell just by looking at her, which won the Best Film Prize in Un Certain Regard at the 2000 Cannes Film Festival; Nine Lives, which won the 2005 Locarno Film Festival, was nominated for several Independent Spirit Awards; and Ten Tiny Love Stories and Fathers and Sons.

His pilot credits include Carnivale, Big Love, Six Degrees, and In Treatment, on which he has also served as executive producer. At the 2010 Festival, he’s screening Mother & Child, which stars Annette Bening as a 50-year-old physical therapist who is still haunted by giving up her daughter (Naomi Watts) when she was a teenager. García, who is also an artist trustee of Sundance Institute, recently talked with the Insider about Mother & Child and why writing is still difficult, even if your father is Gabriel García Márquez.

Do you remember how the story behind Mother & Child came to you?

I started writing it about 10 years ago, but I liked the idea of two people who had been separated and had lived a long chunk of their lives never having met. The easiest thing that came to mind was a mother and child separated after birth and I made the mother 14 so it was clear she had a limited role in making the decision to relinquish her baby.

You’ve said that “[Mother & Child] all takes place in the present, but it was difficult to write because it explores 30 years in the lives of these three women.” Why was writing Mother & Child difficult?

Structure is the most difficult thing, from the work I have to go through and from what other writers go through. Structure is always tough, particularly where your story starts and how to dramatize everything that came before. The original incident doesn’t need much of an explanation.

If I say to you, “she became pregnant when she was 14 and is still haunted by that,” I don’t need to go into explanations. But you have to find a way to dramatize the person she became as a result of that. How do you change people’s experience to behavior? You can’t just say who they were and what happened to them but you have to show through their actions and behavior who they are today.

Did the writing process go well?

What do you do when you get discouraged?

You try anything: you look at other movies, you look at your own scripts to see what worked, you twist it, you turn it, you try to work around changing the elements of the plot. You try to break the logjam any way you can. And stepping away from it is certainly one of them.

It seems like people talk about you being a wonderful writer of parts for women. Is that how you think of yourself?

I like some of the women I’ve written. I enjoy the way I imagine some of these women characters, it excites my imagination. I’m not a woman and I can only create by my imagination but I do enjoy that exercise of daydreaming, of trying to imagine what it’s like to be that woman character I’m thinking about.

You were a creative advisor at the Screenwriters Lab last week. What was that like?

The Festival is Sundance Institute’s brand name, but the Labs are a great part of it, one of the oldest parts. I came here as a Fellow about 10 or 11 years ago with my first movie and this is the second time I’ve come as a creative advisor.

There are 10 or 12 people who’ve been chosen and the Advisors are seasoned. What unites the projects is that there is no mold—we have everything from stories that are intimate and minimalistic to ones that take place in very rural parts of Maine to science fiction films and a woman’s relationship to a unicorn.

Each advisor works with five screenwriters over the four-day Lab, but they’re assigned by the Lab and they try to assign you people who are close to the work that you do, and people who are very different from the work you do.

Do you prefer writing or directing?

I feel that writing is harder, going from the blank page to the hopefully quite realized idea or concept or story. I feel that when I’m directing the movie, especially if it’s well-cast, the actual set doesn’t feel easy to me because I’ve always worked in very low-budget projects, which makes for a stressful shoot, but the writing part of it is harder for me, at least.

Growing up with a father like yours, was the process of writing something that seemed like natural work for you?

I’ve always been familiar with how writers work and the obstacles they face but I have an overview, I was familiar with how artists work – the combination of where inspiration comes from and technique and motivation and insecurities and all that – but when you sit down to write it yourself, I guess I had a jump start in that I think I know how writers work, but it’s still hard to tell a story well.