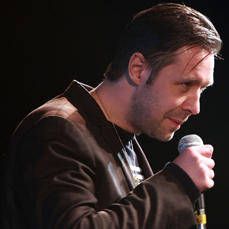 Whenever a movie star moves behind the camera to direct, expectations always seem to be both great and small. A high profile brings an outsized level of interest, but also a suspicion of vanity, that a pretty face is straining to be taken seriously. But then there are the actor’s actors, the kinds of professionals for whom the transition seems completely natural and inevitable. In the case of Paddy Considine, a hard-working, 36-year-old English actor, it seems like everything has been building to his debut as a director. After numerous collaborations with the directors Shane Meadows and Pawel Pawlikowski, and memorable turns in films like In America, The Bourne Ultimatum, and Hot Fuzz, Considine makes his first trip to the Festival in support of Tyrannosaur, which is screening in the World Dramatic Competition. The story of a raging, violently unhinged widower who seeks refuge in the charity shop of a church-going woman who’s hiding troubles of her own, Tyrannosaur is equal parts suspense thriller and love story, blending a strong lyrical sense with moments of shocking brutality. Symbolically, if not literally inspired by people and incidents in Considine’s life, it’s a deeply personal, emotionally raw portrait of damaged yet also resilient people. Considine sat down to talk about adapting a short film into a feature, his intolerance of movie star prima donnas, and the importance of taking liberties.

It’s one thing to make a beautiful looking film, but it’s another to make one that also feels lived in. In that sense, Tyrannosaur reminded me of Last Resort (2000), a film you made with Pawel Pawlikoswki at the beginning of your career, an exquisite-looking film that had real dimension.

Paddy Considine: A lot of films aesthetically look great, but there’s no story to tell, and I’m not interested in the people. You’ve got to tell a story about people you love. But I also didn’t want to apologize for the fact that we had £750,000 to spend, to make the film look as cheap as possible. I wanted to make a movie. I wanted to respect these characters and this story. I didn’t want to chance improvisations or get the camera swinging around. I wanted to frame them. To me they’re heroic. And I wanted them to be treated that way by the frame. I kept telling the crew, “We’re making a movie, you know. I want this mentality that ‘we’re making a little British film’ gone. Lose it now. We’re making a movie.”

There’s the cliché of an actor-turned-director making a kind of indulgent, actorly film. Were you trying to avoid that?

Considine: I wanted the actors to feel creative. That’s all actors need to feel. There’s so much bullshit around acting it makes me nauseous to think about it. Just be creative. Leave your ego at the door. It’s not about you, mate. It’s not about me, either. Very few actors can do that. People just come with too much baggage that manifests itself with being an actor in the film industry. And being on the cover of a magazine. There are no bosses on my set.

I spoke to James Marsh around the time of Red Riding, and he spoke of how much he enjoyed working with you and everyone on that shoot after working in the States for many years. Were you thinking of sets you’d been on, which ones you wanted to emulate and which you didn’t?

Considine: It wasn’t a conscious thing, but I just knew the films that I enjoyed working on. Red Riding was one, In America and Last Resort were others. It’s all about making the actors feel like they’re participating. Like you’re all working towards the same goal, making a piece of art together. But I love American actors. I watch Inside the Actor’s Studio.

But does it feel foreign, like a different thing than what you do?

Considine: No, it’s only certain films, certain budgets, certain distractions that feel foreign. It’s when the lead actor comes on set and he’s telling people where to put the camera. When he’s moaning about where the lights go. When he ain’t there for his reverses. When his people stand in the corner with him near a monitor. It’s unnecessary. I won’t have it. I just won’t have it. If someone said, “This is my manager here,” I’ll be like, “Your manager can take a fucking walk, mate.” I’m not having it. It’s a distraction. I think it’s unnecessary.

It seems like that things might be shifting. Even the higher profile actors who got paid tens of millions of dollars are now taking it upon themselves to go in other ways and make smaller films.

Considine: Because they have to. If you’re an actor in a film and it’s made a hundred million dollars, if you’re not hitting that next time, then it’s coming down. And you’ve got to make a decision about how you conduct yourself and how you go about your business. You’ve got to get humble, get back to the root of what it is you’re doing. The best actors walk around and you just walk past them. What that was just Daniel Day Lewis? What? Him there?

I’m interested in how you adapted your short, Dog Altogether (2007), into this feature. How did you build from the short, both in the sense of writing a feature-length script and in shooting some of those scenes twice, with the same lead actors?

Considine: I think the actors found that the hardest, doing scenes they’d already shot. I actually thought they were very good in those scenes. It’s a bit like the theater-people do it a hundred times and still make it interesting. I understand you’ve committed to it, but you’re more than capable of doing the scene again. The short film is about 17 minutes, and pretty much the first blast of the film is the short. People’s responses in general to Dog Altogether were that they didn’t want it to finish then, they wanted to know what happens next. I was like, “I don’t know, but I’d like to know as well.” As far as writing the script, it just spewed out. I wrote it in about a week. I had no idea how to write a script; I didn’t go to school. And I never want to know how to write scripts.

Considine: One of the first reviews that came back was like, “This script takes liberties, and if it wasn’t for the cast it would seem ridiculous.” And I’m like, cinema takes liberties! All the time. It’s not real. Tyrannosaur is not real. But it is a film about human beings. Their weaknesses and their strengths, their hope and their love and destruction. It’s about all those things. But it’s cinema. Cinema is ridiculous.

But for so many people the idea of it being real is important, it’s about making it as real as possible.

Considine: It’s cinema. It will never be real. Real is happening to people right now. This stuff is cinema. It’s a story about human beings going through extreme situations, and it’s about how we cope with those situations, what we do to survive. Don’t tell me how to write a script. You’re not qualified to do that. You don’t watch the Sex Pistols and go, “I tell you what, lads, if you go to music school for a year…” If you put them in music school there’s no Never Mind the Bollocks. If you do it to the Clash, there’s no “London Calling.” It’s over.

Gary Oldman and Tim Roth are actors who made two terrific debut films but they’ve never made that next film. You’re smart to go right into the next project.

Considine: There’s a part of me that feels sad that Gary hasn’t made another film. Because that one stands up as a brilliant piece of work. I was in college when I watched Nil by Mouth in a cinema in Brighton. I just thought, “I’ve got to do this.” I understood. He was speaking to me.

It seems that part of why you were able to write the script for Tyrannosaur so quickly was that it was a buildup of your own experiences and feelings over the course of your life. Since that can only happen once, do you think it’ll be tougher with the script you’re about to start?

Considine: There’s definitely a little part of me going, “It’s your second one, what are you going to do differently this time?” But I’m going to write it like I did the first script. And if I sit there and find myself thinking about what these people do and how to put words in their mouths, I’ll just put it down. I don’t edit as I’m writing. The minute I’ve got these thoughts and they’re taking over and they’re starting to manifest into bigger scenes in my brain, then I just sit down and bout it out. It might be different this time. It might take ten weeks. But I think essentially you’ve got to just keep that mindset. Let it go. Don’t edit yourself as you write. Just bang it out. See what happens.