Interview: Anthony Mackie on ‘Night Catches Us’ and the Black Panthers 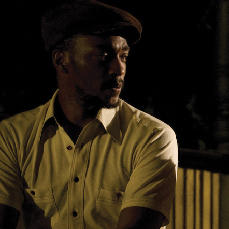 Critically acclaimed actor Anthony Mackie plays Marcus in Night Catches Us, a beautifully directed drama by first-time feature director Tanya Hamilton, who also wrote the script. Set in Philadelphia in 1976 just after the height of the Black Power movement, the story opens with Marcus’s return to the city he left mysteriously several years earlier, and gradually reveals the complex emotional and political reasons behind his departure. As the story unfolds, we witness the brutality and racism of local police, who act with impunity. We also see the efforts of Black Americans to exist in a city that denies them basic rights. Mackie talked to us about the Black Panthers and how he chooses a role, among other topics.

Night Catches Us is a lovely, provocative film that deals with very serious subject matter… Tell me how you came to the project. What attracted you to it?

I read the script a while ago and was compelled by the story. I had also heard so much about that time, but I knew that so much was lost or confused about the Black Panthers through mass media propaganda that, when I read the script, I felt the story became clearer.

As you point out, the Black Panthers are more often villainized than celebrated. Why is that so?

During the civil rights movement, the FBI systematically put officers in place to not only destroy certain organizations but to infiltrate them, to see what they were doing, and to prevent their work. One of those organizations was the Black Panthers. They would make fictitious pamphlets and hand them out in Black neighborhoods. They would harass people.

All of this is documented and written about, so there is a history, but when you say “Black Panthers,” people only think about the violence. The Black Panthers had after-school programs, security programs, literacy programs, job programs… They were taking people off the street and giving them something to look forward to.

How well did you know this history when you began the project?

It was something I didn’t know very well—I knew what I had read in high school and I saw a lot of the books that my older brother was reading in college. So a lot of what I learned came from those books, but I think the important thing is that no matter who you talk to about the Black Panthers, all anyone usually remembers is that they killed those police officers.

But in actuality, those police officers were terrorizing people, taking people’s money, and abusing the power of their badges. Their job is to protect and serve, not terrorize and torment. The more I saw and learned, the more I felt that every neighborhood should have a Black Panthers group. I mean, they were acting as crossing guards, organizing childcare, and helping out in neighborhoods!

You’ve played several provocative characters in your career, including Tupac Shakur in a biopic. How do you choose your roles?

I think I’ve been very lucky, but the thing about a role is that I read it for myself, and the thing that is most important to me is the level of humanity that is written into a character—the level of insecurity, and questioning. All of us are made up of right and wrong, and good characters capture that, and that’s what makes watching movies interesting.