One on One: Rodrigo Cortes and Adam Green at the Sundance Film Festival 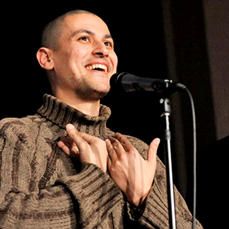 As two films in the Festival diabolically illustrate, claustrophobia has more than one instigator. Both Rodrigo Cortés’s Buried and Adam Green’s Frozen prey on the primal fear of confinement, and each film follows through on the blunt threat of their titles. In Buried, a man (Ryan Reynolds) awakens to find himself buried alive, with only a cell phone and Zippo lighter to battle darkness, panic, and death. And in Frozen, three college kids find themselves stranded high on a ski lift, menaced by forces in the air and on the ground. For both Cortés and Green, a constricted premise was matched by severe formal limitations on character, location, and technique. We sat down with Cortés and Green to trade notes on how two white-knuckle suspense thrillers came to life.

Each of your films involves a premise of extreme confinement. Was the production as challenging for you as the scenario was for your characters?

Rodrigo: I thought of the limitations as a present. When I read the script by Chris Sparling I just said, “Wow, this is something that’s never been done. I want to do that.” I thought of Hitchcock, and I’m sure you did the same.

Rodrigo: Or Rope, those kinds of technical challenges. But good premises usually surrender in the second act. What I did was fight against common sense, and to not think of the objective limitations. I didn’t think in terms of square inches, but of how big the story was. Do we want to know more, does it evolve continuously, does the movie reinvent itself? You have to be visually creative if you want to keep the people there. What was your experience?

Adam: It was great because you didn’t have to worry about set changes or wardrobe. You could just focus on story and performance. Normally in a suspense thriller it’s about these big set pieces. But with both of our films I think the concept is something that’s everybody’s biggest fear, and since you’ve laid that out from the get-go, you can make it all about the actors and story.

Rodrigo: You’re right. In those terms, it’s somehow easier. For instance, with us – you’re buried alive. You don’t have changes of weather, as you did, or changes of light. Sometimes I could even edit scenes on the run, while I was shooting. Usually in order to have coverage you have to change the set. But here if I wanted to try something we just had to place the camera on the other side of the coffin. I could react pretty fast to inspiration.

Adam: Mine was like some March of the Penguins shit. We were freezing to death and I was literally hanging from a harness and cable 50 feet in the air with a camera, trying to shoot these guys. It sucked.

Rodrigo: You were really that high?

Adam: I was really that high.

Rodrigo: For doing close-ups you were that high?

Adam: Yup. I insisted for performance that if we moved to a soundstage or green screen that you would know. When you see their skin and their breath, I mean they’re dying. It’s great. And the actors still talk to me, which is even better. Because I thought they’d hate me when it was over.

Rodrigo: Oh yeah, mistreating actors is great. I don’t know if your actors suffered, but Ryan did. We really injured him.

Adam: They never complained once. The better actors came out for this because they saw it as a challenge and a way to hold an entire film on the shoulders of their talent. Whereas most of young Hollywood just wants to be on TMZ and be famous. Once I told people that it wasn’t going to be on a soundstage, they were like, “You really want me up there? I’m not doing that, there’s no way.”

Rodrigo: The most difficult part for me had to do with the editing and shooting, because we had only one actor, and nothing else.

Adam: So you don’t do flashbacks, you don’t cut away to anything?

Rodrigo: Nothing like that. It’s real time, 90 minutes underground.

Rodrigo: With our film, you can’t cut to the other actor because there is no other actor.

Adam: You can’t even cut to an establishing shot or a POV?

Rodrigo: What point of view? The wood? The dark? So if you don’t shoot it well, you can’t cover yourself. The nightmare was not so much shooting the entire movie underground, but doing it in real time. There were no ellipses. In another movie if you have a very emotional scene, then you can cut to an exterior of the Daily Planet, or to cars in traffic, and then you can move on with your story. But here, if he breaks down, you have to stay there, he has to recover himself before you can go on. In emotional and technical terms it was pretty hard.

What’s the benefit of it being so hard?

Rodrigo: The benefit is that the movie becomes a physical experience, so that everybody feels the same as the main character. The audience is there, buried alive for 90 minutes. They feel the darkness, the sweat, the anger, the hope. If the audience sees your movie, or mine, it’s because they want to suffer. Let’s be sincere.

Adam: They want to know what it would be like. It’s that morbid curiosity.

Rodrigo: They don’t want to feel safe. If they go to see Frozen, it’s because they want to freeze, they want to enjoy a bad time.

Yet you can’t be in full danger for 90 minutes. There needs to be some sort of phrasing. How do you manage that, considering you’ve both limited your options for managing time?

Adam: It sounds like we both come from the school of Hitchcock, which is that the suspense won’t work without those breaks of tension. If you try to do it for 90 minutes, after 20 minutes people get numb to it. You need to find some moments of sanity before the next awful thing happens. If you don’t break it up and make it a little bit of a ride, it just won’t work.

Rodrigo: You can’t have the rope taut for the whole time. You’re totally right, you have to have peaks and valleys, and that’s the most difficult part. You have to do that with the camera as well. The picture and style have to evolve.

Because you want the audience to identify so strongly with the situation, is there an element where your characters can’t have too strong of an identity?

Adam: As long as you keep them real, and you make the characters your audience, you’re fine. But if you give them a special trait, if you suddenly make them a big hero, that’s when you feel like you’re watching a movie. So let them be cowards, let them suffer, let them cry. Let them do what you’d do.

Rodrigo: At the same time it’s weird because people identify with every main character you could use. Even if it’s the worst person in the world, you can identify with the point of view. But if you want them to suffer, you’re right – you have to show his defects. You want people to feel weak, that they can die at any moment, that human life is hanging by a thread.

You both sound very conscious of the audience, of what you’re doing to them and the path you’re taking them down. Not every director engages so directly with the audience.

Adam: Especially within the genre of suspense thriller you have to do it with the audience in mind. That’s the fun of making these films. It’s a good suspense film if people are going, “oh!” or “ugh!” or “no!” You’re thinking about that soundtrack the whole time you’re writing and directing. Their stomachs are going to drop here, or they’re going to feel claustrophobic there. If the audience isn’t reacting, then what’s the point? You don’t go to see a suspense thriller to laugh or just sit there.

Rodrigo: You have to think of the audience always, but it doesn’t mean you have to like them. You as a director have to manipulate them. You’re like the magician that makes them look at this hand while you do something with your other hand. If you want to trick them, in a sense, you have to think of their mechanisms of perception. You let people know what you want them to know. You control the information so that you can surprise them, give them what they want, or give them exactly the opposite of what they want. You try to think of how their brains behave so that you can take advantage of that. It’s manipulation in the best sense of the word. Hopefully.