One on One (on One): Spencer Susser, David Michod, and Ken Wardrop 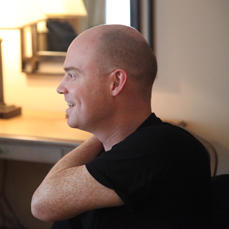 For three emerging filmmakers, the 2010 Sundance Film Festival represents both a triumphant return and an auspicious beginning. Directors David Michôd, Spencer Susser, and Ken Wardrop all presented acclaimed short films at the 2008 Festival, and remarkably all have returned just two years later with debut features.

But for each, the transition to features is less of a graduation than an expansion of an already well-established personal vision. Susser’s short I Love Sarah Jane (2008) smuggled a sweet portrait of puppy love into a bloody tale of zombie apocalypse, and his feature Hesher similarly embeds a sensitive portrait of despair within a rousing story of a raven-haired, head-banging interloper.

His shorts Undressing My Mother (2006), Scoring (2008) and Farewell Packets of Ten (2008) were intimate, highly stylized snapshots, and his feature His and Hers expands on that approach by crafting a collective story of womanhood from seventy candid conversations with Irishwomen at different stages of their lives.

The three directors met up with the Insider to discuss what it’s like to return to the Festival, the pressures of the big stage, and the enduring value of the short form.

You’ve all been to the Festival before, but what’s different about attending with a feature?

David: One of the beauties of Sundance is that, though it feels special to be here with a feature, it felt really special to be here with a short. I’ve had the experience of going to other high-profile festivals and as a shorts filmmaker you’re kind of ignored. You’re just a sidebar event. Like it’s an obligation to program shorts. Here it felt important, we felt like artists.

Ken: You get here and everybody has a director’s badge. It’s not “Shorts Director.” You’re a director. And I’d never been to a festival where you get an opportunity to show your short five times—to packed audiences. One difference I think I’m going to feel this year is that there’s nowhere to hide. As a short filmmaker you can hide quite easily, and if things don’t go particularly well there are no questions or whispers.

David: And you don’t have to read reviews.

Ken: It’s true, the reviews of shorts are not going to make or break you.

Spencer: I’m sure a lot of filmmakers are in the same boat, but with my short, I Love Sarah Jane, I was scrambling to finish it before I got here. I pretty much carried it with me on the plane. It’s the same situation with Hesher, and because I haven’t had a second to think about the film being here, it doesn’t feel any different.

It sounds like your investment in the material—short or feature—was the same for both. It consumed you and ruled your life up until the point that you brought it here.

Spencer: It’s the same because you put every ounce of energy into it. It’s how I’ve always worked. I made a lot of commercials and music videos in the past, and no matter how small it is you put everything you’ve got into it.

Ken: I think that’s obviously one of the reasons you’re here with your feature, Spencer, is because of that investment and that perfectionism.

Spencer: Do you feel the same way?

Ken: Absolutely. You live and breathe it for so long. And it’s to the detriment of lots of other things in your life. It starts to take over and consume you.

David: It takes so much out of you, especially making a feature. It’s such a massive investment.

Spencer: The thing I didn’t realize when making a feature was what a marathon it would be. You’ve got to pace yourself, and I didn’t know that. I just went until I literally could not see straight. Physically I feel beaten up. But also inspired because of what I’ve done. I made this thing, a little baby.

Ken: It is like having a child. Not that I’m a father or anything, but it’s the same sort of feelings. You show it to the world. And it’s the most beautiful baby, isn’t it?

David: Except that the difference is that once it comes out, and you show it to people, it’s very rare with a baby for people to go, “That baby is fucking ugly. Its head makes no sense compared to its feet.”

Were your shorts something you thought of as building toward a feature, or were they meant to work on their own terms?

David: I specifically made Crossbow because I’d been trying to get Animal Kingdom to happen. I’d been talking to people about this crime drama script, and it became clear to me that it was being read in all different ways. Some people thought it was some kind of crime caper comedy, and others thought it was some bleak kitchen sinker, while I was in these meetings trying to communicate something that was kind of violent and dark yet also sort of beautiful. And I thought, I’m going to have to make something so that people a) get a sense of what I’m talking about and b) can have some confidence in me as a director. So I went [and made Crossbow] and I think it built momentum immediately. Then I went and made Netherland Dwarf specifically because I wanted to demonstrate that I could make more of a basic, conventional narrative. I treated them both as little works of art in themselves, but very strategically also made things that would help me get to make this feature script that I’d been wanting to make for years.

Spencer: There were two sides to I Love Sarah Jane. One was that I was working with David in Australia on the script [for Hesher], and I was going out of my mind not shooting. I love shooting stuff. I love being on set. It just feels like you’re creating. I love editing too, but it’s a totally different thing, and so is writing. And then the other side was that I had this idea for a feature. Now I don’t think I’m a great salesman. Selling an idea is really hard. I felt the best way to pitch this film was to show people.

Ken: I was making shorts in a different way. In the back of my head I always wanted to make a feature, but I don’t think I ever believed I’d get there. I started to get into zones like, “I’m a short filmmaker. That’s it.” So it’s interesting that you had the confidence to make the shorts as a calling card for the feature. But you guys also made shorts that were good enough to surpass that calling card. That’s the talent coming through.

David: I made the mistake, before Crossbow, of making a short that I just treated as a test scene. And it was terrible. I remember coming out of that thinking, okay, if I’m going to do this again, I need to treat this short not as a stepping stone, but love it as a thing in itself.

Spencer: A self-contained piece of work.

Ken: I think that’s great, because I’m a passionate short filmmaker. I will continue to make them. Having a respect for shorts as a genre is very important. Programmers are aware of that too. They look at certain films and say, “This is a short film, it’s a statement in a short form.”

Do shorts lend themselves to experimentation? Can you try something out without fearing for the consequences to your career, as you might with a feature?

David: It allows me to do something I couldn’t imagine getting the money to do on a large scale. With Crossbow I kind of enjoyed doing whatever the hell I wanted to do.

Ken: It would be nice to think that you could do that with features, but there’s just too much at stake, isn’t there? His and Hers is a bit of an experiment—narratively, it isn’t that traditional, in fact I don’t think it’s really been done before—but I wasn’t taking any risks with the money.

Ken: Do you think you’d have enjoyed it more?

Spencer: I absolutely would have enjoyed it more. We made our film union, and there are set rules. Things cost what they cost, and you’re really working in a box. With a short or music video, there’s a lot of flexibility.

David: I can’t really complain, because it’s not like I had anyone telling me what to do, but I personally feel the weight of the responsibility of having millions of dollars of other people’s money at my disposal, and I don’t want to piss it up the wall.

Ken: I think that’s a familiar story for short filmmakers who’ve come up through the ranks and made these joyous little things. And then you hit the reality of the feature, and the game changes. You’re under so much more pressure regarding the allocation of funds, and who gets what. No one will do anything for nothing, or for the love of it. In shorts, you have a lot of people doing it for the passion of the process.